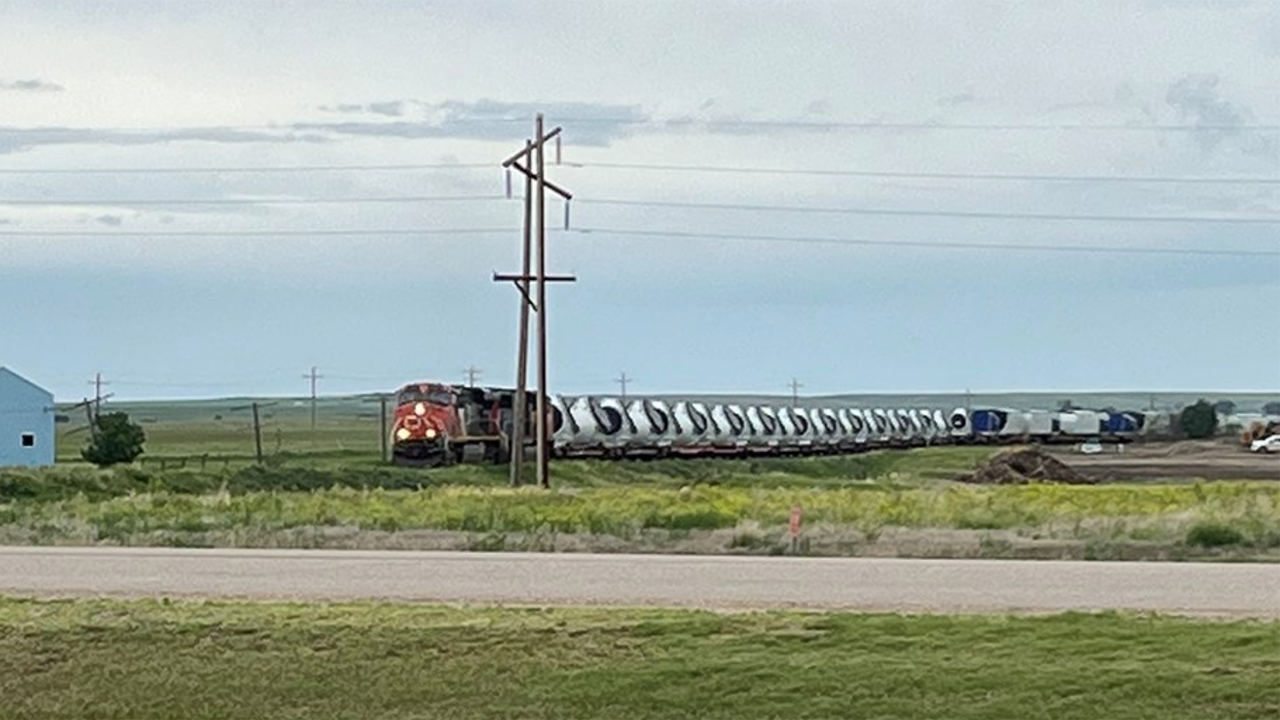 There are nearly 7,000 wind turbines across 317 wind farms in Canada, and 87,000 wind turbines in the U.S., according to CN, which has moved more than 10,000 single wind-turbine units since 2016. The Class I reported in an Aug. 12 Twitter post that the town of Oyen, Alberta, was the latest to receive 11 CN unit trains (40-70 railcars each) of components, including tower sections, blades, hubs and nacelles. The components will support the installation of four separate wind farms in southern Alberta in 2022.

Moving these units to their end destination is a complex process as wind turbine components are large and uniquely shaped. Turbine blades, for example, can measure more than 200 feet long by 12 feet wide and 16 feet high, and, like most wind energy components, are moved in full unit trains varying from 30 to 75 railcars per train, according to CN.

For the most recent move, a “dedicated CN team worked successfully with multiple stakeholders to transport these goods from the wind turbine manufacturers to Oyen,” CN said.

CSX has joined the relief effort in eastern Kentucky, where heavy rain on July 27 led to widespread flooding, forcing hundreds of people from their homes; at least 35 people died. The region is home to many CSX families, several of whom have been affected, according to the Class I railroad.

CSX reported on Aug. 10 that it has contributed $50,000 to the American Red Cross for disaster relief and $25,000 to the Team Eastern Kentucky Flood Relief Fund. It also provided $5,000 and transportation services to Kentucky Steam Heritage Corporation (KSHC). KSHC assembled former Ringling Bros. & Barnum and Bailey Circus housing cars into a nine-car train to provide 100 beds for relief workers in the region; CSX took on the job of moving the train into position as close as safely possible to the affected area.

CSX is now is matching employee donations—up to $1,000, dollar-for-dollar—to the CSX Employees Disaster Relief Fund (EDRF) or the Red Cross through its Matching Gifts program. The CSX Employees Disaster Relief Fund provides financial assistance to employees who have suffered severe damage to their homes and property, according to the railroad. It said that donations to the Red Cross will support the wide range of assistance under way, including working with community and government agencies to assess damage and support emergency needs. The Red Cross is providing shelter, food and health services to families who lost their homes and belongings; Team Eastern Kentucky, formed by Kentucky Gov. Andy Beshear, is also assisting.

“The flooding has disrupted the lives of many CSX employees and their families,” CSX Vice President of Corporate Communications Bryan Tucker said. “They’re experiencing significant financial hardship, and I encourage all CSX employees to consider helping your co-workers by providing a tax-deductible contribution to the CSX Employees Disaster Relief Fund.”