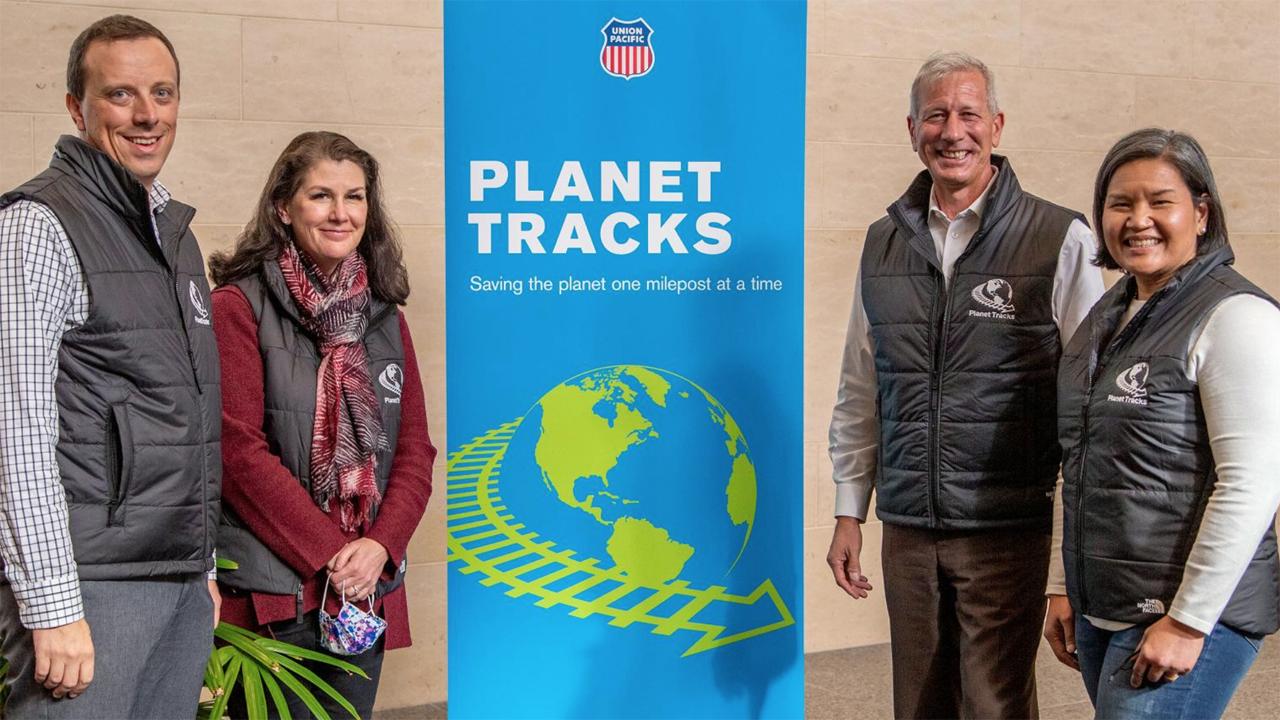 CN has been added to Dow Jones Sustainability Index (DJSI) North America and DJSI World for 2021. In addition, Canadian Pacific (CP) is joining forces with Canadian Music Hall-of-Famer Steven Page and The Strumbellas to fight hunger; CSX has earned a National Defense Transportation Association service award; and Union Pacific (UP) has launched a Business Resource Group focused on the environment.

The DJSI follows a “best-in-class approach,” surveying sustainability leaders from each industry on a global and regional level. The annual review of the DJSI family of indices “is based on a thorough analysis of economic, environmental and social performance,” CN noted. Corporate governance, risk management, climate change mitigation, supply chain management, stakeholder engagement and labor practices are assessed.

“Our inclusion in the Dow Jones Sustainability Indices for both North America and the World validates our ongoing commitment to be a sustainability leader, and is the result of the hard work and dedication of our railroaders,” CN President and CEO JJ Ruest said. “Over the last few weeks, we have announced important partnerships regarding renewable fuels testing and the purchase of a battery-electric locomotive for a joint pilot. We will continue to take meaningful steps towards our goal to be the safest and most carbon-efficient, operationally effective, and customer-centric railroad in North America.”

DJSI North America comprises sustainability leaders representing the top 20% of the largest 600 North American companies in the S&P Global Broad Market Index (BMI). DJSI World includes sustainability leaders that represent the top 10% of the largest 2,500 companies in the S&P Global BMI. Launched in 1999, DJSI World is described by Dow Jones as “the gold standard for corporate sustainability and is the first global index to track the leading sustainability-driven companies based on RobecoSAM’s analysis of financially material Environmental, Social, and Governance (ESG) factors and S&P Dow Jones Indices robust index methodology.”

Steven Page and The Strumbellas will lead a cast of performers aboard the CP Holiday Train for the 2021 “Holiday Train at Home” concert, to be streamed on Facebook, YouTube and www.cpr.ca/holidaytrain on Dec. 18. The virtual concert will also feature performances by Keb’ Mo’, The Trews, Tanika Charles, Odds, Aysanabee and Sierra Noble.

In 2021, CP said it will donate $1.24 million to 198 food banks in communities that ordinarily host in-person CP Holiday Train events. The Class I railroad will also direct viewers to donate to Food Banks Canada and Feeding America, the national organizations that support community food banks in their respective countries, and to give to their local food bank. Prior to the pandemic, CP called on CP Holiday Train event attendees to make a cash or non-perishable food donation.

“With the ‘Holiday Train at Home’ concert, CP hopes to inspire support for food banks across North America,” CP President and CEO Keith Creel said. “Though we are disappointed we again cannot bring an in-person show to communities along our rail lines, it fills us with joy to bring together such outstanding musicians for a performance that will help feed Canadians and Americans in need. The CP family looks forward to bringing the Holiday Train back on tour as soon as it’s safe.”

The National Defense Transportation Association (NDTA) has honored CSX with a Corporate Distinguished Service Award. CSX said it was the only railroad among the 38 companies to receive the award, which recognizes corporate members that “have provided outstanding service to NDTA’s goals and programs.”

“The NDTA brings together government, military and private-sector leaders to share ideas that strengthen our national defense and homeland security, so receiving its Distinguished Service Award is a tremendous honor for all of us at CSX,” Senior Vice President of Sales Arthur Adams said.

CSX transports defense equipment and supplies that often require special handling, according to the railroad. In addition, more than 3,000 CSX employees are veterans or active duty members of the military, and many more employees and their families participate in CSX Pride in Service activities that support the nation’s military community.

The volunteer group is open to all UP employees who are interested in promoting and inspiring sustainability efforts. More than 400 employees have signed up so far, according to Craig Ingrisano, Planet Tracks President and UP’s Director of Labor Relations.

“You are all pioneers,” UP Chairman, President and CEO Lance Fritz said during the Nov. 17 in-person kickoff meeting. “You are part of the first-ever Business Resource Group at Union Pacific and the first BRG at a Class I railroad dedicated to sustainability.”