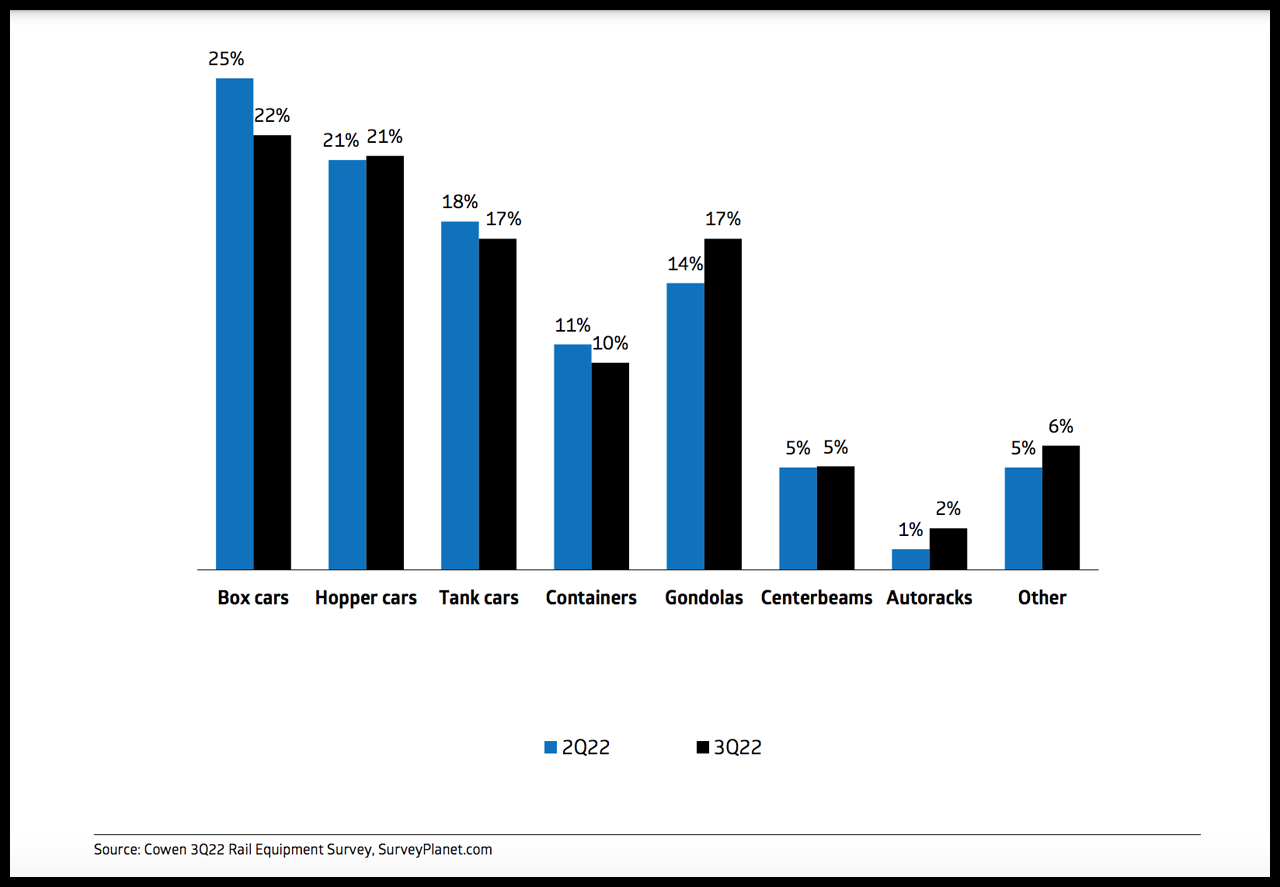 According to Cowen and Company’s recently conducted third-quarter 2022 Rail Equipment and Rail Shipper surveys, the positive outlook for railcar orders remains relatively unchanged from the second quarter, and rail shipping pricing expectations have ticked down sequentially. Details follow, plus insights on the Class I railroads, ahead of earnings.

Expected rail shipping price increases were 4.2%, down another 40 bps sequentially this quarter, but still above survey’s five-year average. Business growth expectations stepped down again this quarter, while economic confidence improved. Some 60% of shippers stated rail service is impacting their transportation decisions. Results suggest a slight negative for the rail group; we continue to favor Canadian Pacific among the rail group.

What the Rail Equipment Survey Results Tell Us

Order expectations from shippers’ remain relatively in line from our second-quarter survey, but the level of certainty moderately declined in our recent survey. About 52% of all shippers surveyed said they will or may order railcars in the next 12 months. Within this 52% of total shippers who are contemplating orders in the next 12 months, 54% said “yes,” they plan to place orders, versus 67% in second-quarter 2022, and 46% said “maybe,” compared with 33% in second-quarter 2022. The shift from “yes” to “maybe” in our survey could be driven by recent macro headlines of continuing inflationary pressures and recessionary fears. Rising interest rates may offset some of the steel decline benefit to new car buyers. We expect spot lease rates to continue their eight-quarter run of sequential quarterly improvements well into 2023. If steel prices continue to ease materially, and inflation eases, manufacturing orders could see notable increases, which could eventually cause the lease rate momentum to moderate sometime next year. We favor GATX and The Greenbrier Companies (GBX) going into the print.

What the Rail Shipper Survey Results Tell Us

Shippers anticipate rail prices to increase by 4.2% over the next six to 12 months, down another 40 bps compared with last quarter’s survey. The 4.2% result is above the survey’s five-year average of 3.6% and above the survey’s long-term 10-year average of 3.7%. We view the sequential step-down in pricing as a negative for the group, particularly after the rails have all cited an elevated cost environment including the recent labor contract. While we believe these labor costs will ultimately be passed on to shippers, it will take some time given long-term contracts (approximately three years on average) and the pace of re-pricing their book of business (roughly 50% is re-priced each year). We recently revised our 2023 Class I earnings assumptions downward given these constraints as well as anticipated economic weakness.

Business growth expectations declined 40 bps sequentially to 1.7%, and below the survey’s six-year average of 2.6%. The percentage of shippers expecting their employee counts to increase over the next 12 months decreased sequentially for the second quarter in a row, down 8% from last quarter’s response. Some 18% of shippers answered that they are more confident in the direction of the economy today than they were three months ago, a step up from last quarter (a survey low), while still notably below the survey’s 46% average.

Some 51% of survey respondents indicated that they would put 0%-5% more freight on the railroads if service levels improved (up 1% sequentially); 28% of participants said they would move 5%-10% more freight, also up 1% sequentially. As we previously highlighted from our NEARS conference takeaways, shippers continue to face inconsistent service, and notable improvements may not start being felt until the end of first-half 2023. Panelists emphasized that the U.S. Class I’s have lagged behind the short lines and Canadian carriers in providing reliable service.

Insight on Rail Stocks Ahead of Earnings

We published updated rail estimates earlier this month to adjust our assumptions for quarter-to-date volumes and cost implications for both rising energy prices and labor negotiations. While there appeared to be a tentative agreement reached, earlier this week one union rejected the tentative contract. This will send the parties back to the negotiating table and increases the likelihood of a rail strike beginning Nov. 14, in our view. We expect the railroads to pass these cost increases to customers gradually given the longevity of rail contracts.

We adjusted our 2023 EPS assumptions downward for the railroads on our assumption that rail congestion and volume challenges will bleed into 2023, coupled with higher costs of operations. With rail contracts approximately three years, near-term margin dilution may play out in 2023 as labor and materials costs increase across the board. Rail volumes continue to run below 2019 levels, and the deteriorating truck pricing market will likely cause some shippers to rethink modes of transportation (from rail to OTR).