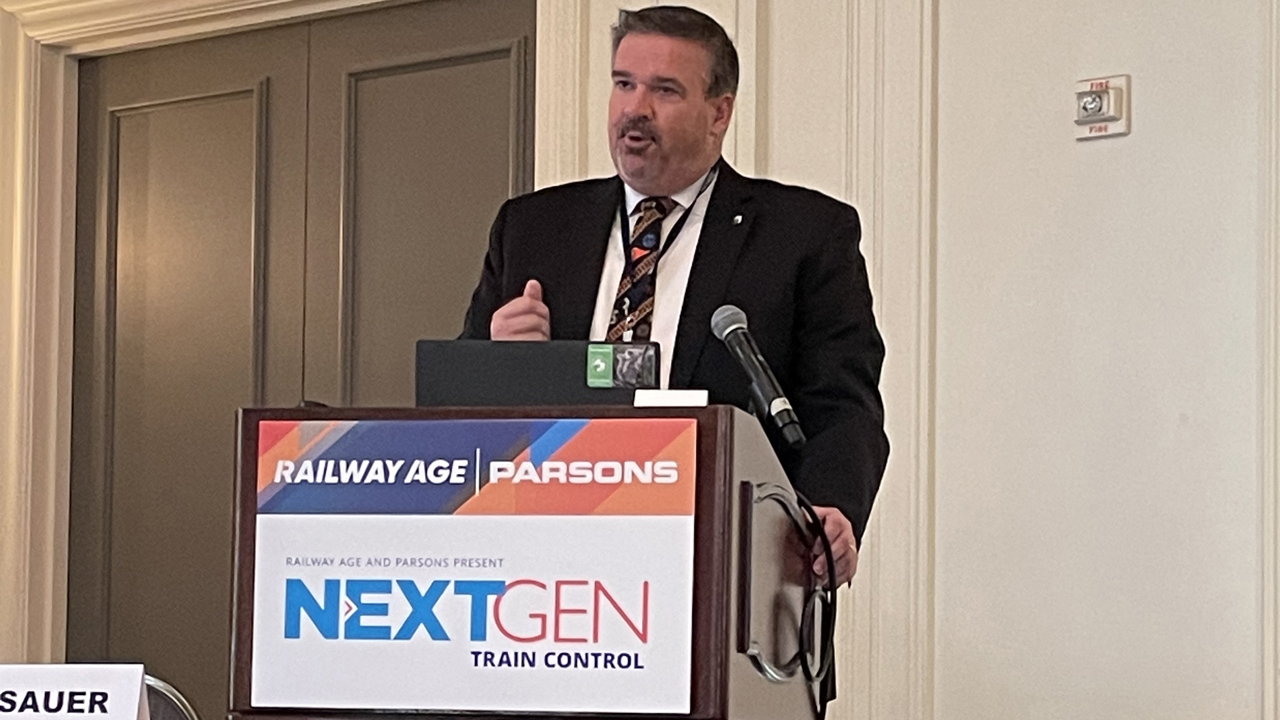 On Oct. 20-21, I attended the 2022 edition of the annual Railway Age/Parsons-Next-Gen Train Control Conference, which was well attended by approximately 165 individuals. From its beginning in 1995, the conference’s primary focus has been that of Communications-Based Train Control (CBTC), which is the optimal moving-block train control system for transits across the globe. However, for freight railroads with thousands of track-miles, CBTC’s capital investment and ongoing maintenance requirements are too extensive. Addition- ally, moving-block is not a necessary traffic control for most freight trackage.

Perhaps that’s why those in the transit space outnumber freight railroading personnel at this conference. But that may change somewhat in the not-so-near future. I should note that since the U.S. federal mandate of Positive Train Control (PTC) in 2008, this topic has been covered (including my own presentations), keeping in mind that PTC is a non-vital system, and not used in conjunction with CBTC.

After so many preceding conferences, there is no longer the need to explain the technical or functional aspects of CBTC. It is a well-established and proven train control system. What is of interest now are the ongoing implementation challenges by various authorities. For example, there was discussion on work trains in CBTC territory as well as the issue of interoperability for CBTC. To be clear, the latter is not the same as PTC interoperability, which addresses providing PTC functionality on locomotives on home and foreign railroads. Rather, the issue of interoperability for CBTC appeared to me to be that of “equipment exchangeability” to support competition between suppliers.

Below I discuss what I believe where the highlights of the conference, and there were several most interesting ones not involving CBTC directly. Following that discussion, I will address what I see to be Advanced Train Control+ for North American freight railroads, a subject of particular interest.

What is unique about this conference, and most interesting in my humble opinion, is the introduction of topics that are not directly about CBTC. I am referring to three specific presentations made by suppliers on their proven offerings: 4AI Systems, Piper Networks and Frauscher.

4AI Systems, the Australian company, now with a physical presence in the U.S., offers HORUS as an all-seeing artificial intelligence (AI), i.e., machine learning, system designed for real-time detection and classification of hazards and objects on and/or approaching the track. HORUS has been tested and accepted by the New York MTA Transit Tech Lab as a proof of concept. Specifically, this system addresses the “uncontrollable” intrusion of vehicles, individuals and even animals (cattle, kangaroos) that can encroach upon the right-of-way. It does so using cameras and AI to identify such objects with a calculated determination of what those intrusions are. This is not a vital system nor an enforcement one such as PTC. Rather this is an “awareness” system for the driver beyond his/her recognition as a possible movement integrity issue.

Piper Networks provided information on three different systems: 1) HELIX, as deployed across the Northeast Corridor for Amtrak, is an enforcement system for m/w crews and equipment. As with PTC, it is not a vital system. 2) Enhanced Transit Location System (ETLS) provides for the tracking of vehicles, trains and people with high accuracy. The brochure for ETLS states that it is vital. However, the term “vital” refers to equipment vitality (SIL4 safety verified). However, ETLS is not functionally vital in that it does not generate authorities. 3) SAFEGUARD is a grade crossing safety solution to make operators aware of potential hazards. Again, it is not a vital system.

Frauscher made a presentation on the use of axle counters, and the possible advantages of their use in the U.S. These hardy devices are used for vital track occupancy across the globe in lieu of track circuits. I should note that a point was made that a very low percentage of broken rail occurrences (perhaps 5%) are discovered via track circuits.

In the Oct. 9, 2022 edition of The New York Times, there was a guest essay titled “Mismanagement and ‘Monster Trains’ Have Wrecked American Rail.” The short of it is that Precision Scheduled Railroading (PSR) has fallen well short of improving railroad operations as promoted. What was introduced to CSX by Hunter Harrison was a methodology that was effective on the relatively straight and simple CN compared to the complexity of CSX’s trackage east of the Mississippi. What has occurred are trains as long as 15,000 feet prohibit meet/pass opportunities due to limited sidings length. Hence, schedules cannot be adhered to, and the expected efficiencies by reducing major “slack asset resources” cannot be achieved. Therefore, if PSR isn’t working for those railroads that have deployed it, or for connecting railroads that have not, then what advanced train control can be delivered?

In North America, there are two primary train control methods: 1) Centralized Traffic Control (CTC) signaled territory, which relies on track circuits for occupancy, and 2) non-signaled or “dark” territory. In the U.S., the split between the two is 50/50, with one-third of dark territory incorporating signals (Absolute Block) as a secondary level of vitality. For CTC, the most obvious means to advance it is to replace the physical track circuits and control points with “virtual” positioning. This means that both the front and rear of the train must be known to determine track occupancy. With this approach, virtual blocks can be dynamically defined to address the inefficiencies of fixed block with signals.

The capability to deploy a virtual CTC (VCTC) exists today. However, it may not be deployed by North American railroads soon for two reasons. First, VCTC (as my colleague Dave Schanoes and I developed for the railroads of Egypt and Kazakhstan) is a low-cost solution for suppliers, who may have to sacrifice substantial revenues generated by railroad capital investment and ongoing maintenance. So, traditional suppliers will not be eager to deliver it. Second, the nearly total reduction in wayside infrastructure by deploying VCTC eliminates the need for vast numbers of railroad employees. Hence, rail labor will aggressively fight the change. As to deploying VCTC in dark territory, the case is much simpler as to the above two points. But there is the issue of interoperability with signaled territory if locomotives cannot be dedicated.

Given the disappointing results of PSR and pushback on low-cost technologies like VCTC, I see one other possibility: Proactive Traffic Management (PTM). Simply stated, this is the ability to use real-time positioning and speed data to dynamically manage train movements via mathematical tools. I understand that at least one Class I is doing this.

Going forward with NGTC conferences, I expect there will be more to discuss on CBTC, but primarily for the uninitiated. I do hope there will be more discussions as to related subjects as provided by companies like 4AI Systems, Piper Networks and Frauscher. For example, a sister Frauscher company offers a fiber-optic-based product that replaces track circuits, as being deployed by a major European railroad. Another possibility is the use of the PTC wireless network to support advanced asset management, including PTM, for freight railroads, both individually and with an industry perspective. Unfortunately, that may not happen soon, I suspect.

Ron Lindsey is an independent consultant in the rail and intermodal industries. He began his career with IBM in 1970. He then joined the Trustee Staff of the Penn Central bankruptcy and has spent the past 40-plus years in railroad management and consulting. He was Chief Engineer Communications at Conrail and Director of Advanced Train Control at CSX, where his primary responsibility was to conceive and manage development of an overlay PTC system that is the basis for systems being deployed to meet the federal mandate. Additionally, he conceived and managed the design of an advanced train control/management system, Virtual CTC, for the railroads of Egypt and Kazakhstan. In addition to providing strategic technology planning sessions and market studies, Lindsey offers a suite of courses on conventional and advanced railroad operations based upon advancing technologies that are used by railroads, suppliers, and Professional Engineers to satisfy their ongoing education credits. His website, strategicrailroading.com, has numerous postings on the advancement of railroad operations and safety, including PTM, VCTC and PTC.