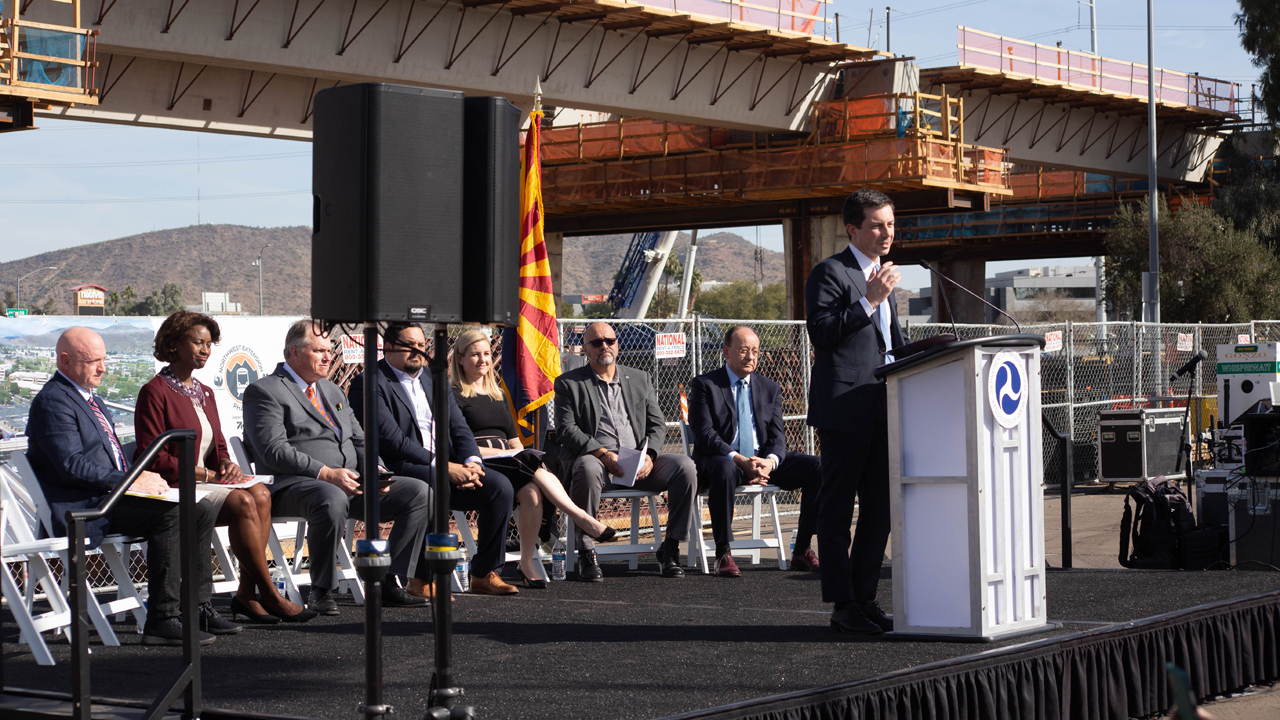 Officials from the U.S. Department of Transportation; Phoenix, Ariz.; and Valley Metro celebrated the signing of a $158.1 million Full Funding Grant Agreement for the Northwest Extension Phase II Light Rail Project on Nov. 19.

The funding is provided through the Federal Transit Administration’s Capital Investment Grants (CIG) Program. Valley Metro in June reported that within FTA’s $2.5 billion funding recommendation for Fiscal Year 2022, it included a $58 million CIG allocation for Northwest Extension Phase II, the third for the project, bringing the total to $158.1 million. CIG, Proposition 400 regional, and Phoenix T2050 funds will cover the total project cost of $401.3 million.

The extension (see map above) will add 1.6 miles of track, three stations, three bridges, a parking structure, and a multi-modal transit center to the existing 28-mile light rail system. Slated to open in February 2025, it will link the current terminus at 19th Avenue and Dunlap with the Metrocenter area. The extension will provide greater transit access to Phoenix residents west of the I-17 thanks to a new rail-only bridge that will be built over the freeway and the first elevated station. It is expected to serve 5,700 riders per day.

In 2004, the Phoenix City Council approved the Northwest Extension to expand light rail from 19th Ave./Montebello to 25th Ave. and Mountain View Rd. In 2007, that route was divided into two phases: the 3.2-mile Phase I on 19th Ave. from Montebello to Dunlap Ave., which opened on March 19, 2016, and the 1.6-mile Northwest Phase II, for which construction began in 2020.

“This extension is going to enable more people to enjoy safe, fast, frequent and reliable public transportation, and it’s an environmentally friendly project,” FTA Administrator Nuria Fernandez said. “This connection will tie people to downtown, to Arizona State University and Sky Harbor International Airport—high-activity areas where there is job generation.”

“Our system is relatively young—only 13 years old—but in that time, has changed our communities for the better,” Valley Metro CEO Scott Smith said. “We have seen unprecedented mobility, development and change for the good. Northwest Extension Phase II has a huge impact because of where it is, crossing a boundary between central and west Phoenix, and ending at one of the most exciting and unique redevelopment efforts in the entire country.”