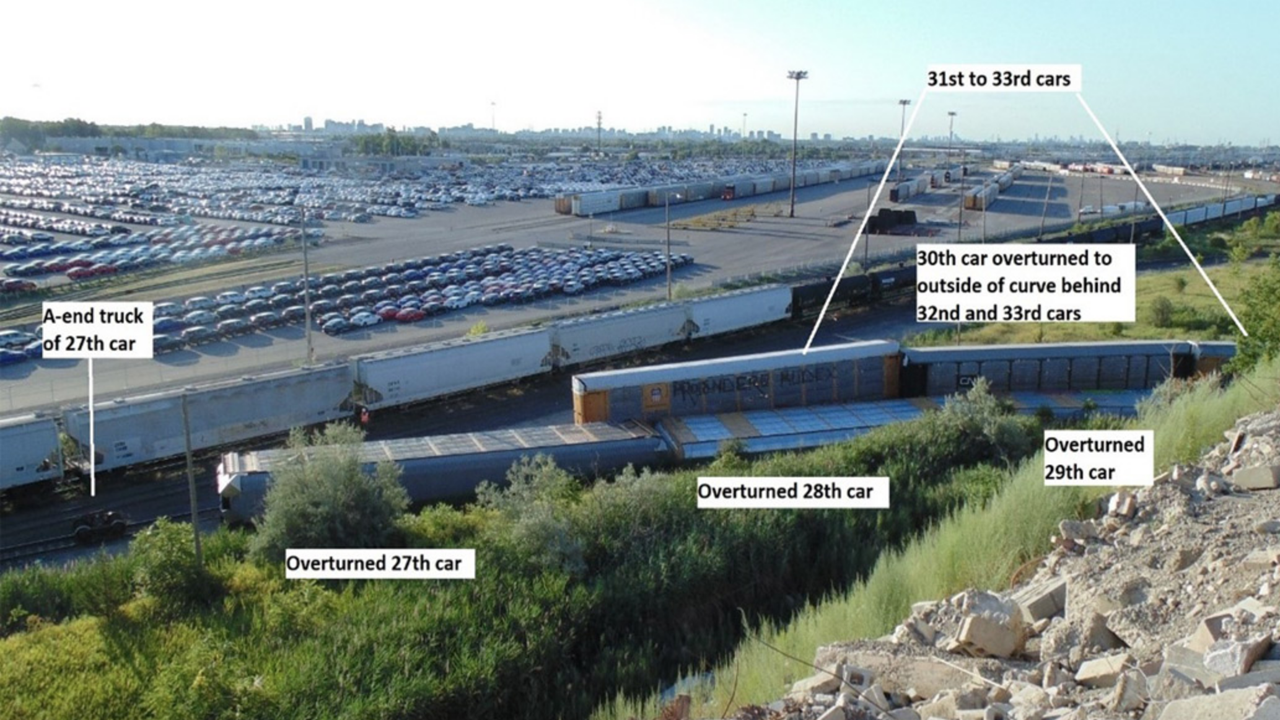 An August 2019 string-line derailment at CN’s MacMillan Yard in Ontario led to the death of a rail yard operating employee, according to the Transportation Safety Board of Canada (TSB), which officially released its investigation report on April 5.

On Aug. 15, 2019, a CN remote control locomotive system (RCLS) yard assignment was pulling 82 cars northward on track W100 of CN’s Vaughan, Ontario yard, the TSB noted in its report (download below). A CN employee was controlling the assignment remotely using a Beltpack; he was located on the left side of the leading end of the 27th car. “As the assignment negotiated a 15-degree left-hand curve, the trailing end of the 26th car behind the locomotives string-lined, causing it to derail along with the next eight cars,” TSB reported. “String-lining is the tendency of a long cut of cars to shortcut a curve when being pulled, a problem that is amplified in a heavier train when handling light cars that are followed by significantly heavier cars. All nine cars that derailed were empty multi-level autorack cars. During the derailment, the 27th to 29th cars overturned on their sides to the inside of the curve and pinned the employee under the 27th car. The employee sustained fatal injuries.”

According to the investigation, “when the trailing end of the 26th car string-lined, the left side wheels of the trailing truck … climbed the rail, derailing the car to the inside of a 15-degree curve. As it derailed, the 26th car pulled laterally on the leading-end coupler of the 27th car, causing the 27th car to roll off its trucks, separate from the head-end cars, and overturn on its side.”

TSB reported that its investigation included a series of train dynamic simulations, which “identified that the RCLS programming caused an aggressive throttle response which in turn led to a rapid acceleration and run-out of train slack on the long tail-end heavy assignment. It was also determined that since a lighter cut of autorack cars equipped with hydraulic end-of-car cushioning devices was placed between two heavy cuts, the devices were compressed during the previous deceleration. Therefore, the aggressive acceleration of the assignment likely resulted in a rapid run-out of train slack, which contributed to the string-line derailment. Additionally, it was found that the air brakes likely remained on the 63rd car, which also contributed to the accident.”

The employee’s actions “while switching before the accident, and during RCLS operation using the Beltpack, were in accordance with company requirements and his training,” according to TSB.

The agency reported that if “railways do not reinforce safe, smooth train handling options for RCLS use during yard operations and provide more specific guidance for identifying conditions that are conducive to string-line events, the risk for a string-line event will remain.”

• Issued Notices No. 1908-15 and 1908-21 “that contained revised instructions for S-Yard industrial released cars, pulling cars on W100 track and train handling while pulling cars from W100 track.”
• Updated training material “to highlight hazard areas for tracks with high curvature and instruct employees to ride either the locomotive or the trailing car on tracks with curves of over 12 degrees.”
• Reconfigured the 15-degree left-hand curve in track W100 “to reduce the track’s curvature from 15 degrees to 12 degrees.”
• Developed a process “to verify that safety-critical information communicated by a notice is also included in the next Summary Bulletin and, if required, the respective yard operating manual.”
• Made changes to “RCLS programming to allow for a more gradual application of the locomotive throttle during RCLS operations,” working in coordination with General Electric and Beltpack manufacturer Cattron Intellectual Property Corporation.

In related developments, TSB at a March 31 news conference released its investigation report of Canadian Pacific’s Feb. 4, 2019 train derailment on the Laggan Subdivision near Field, British Columbia; CP later in the day issued a strong statement, calling out “inaccuracies and misrepresentations” made at the conference and in the report.