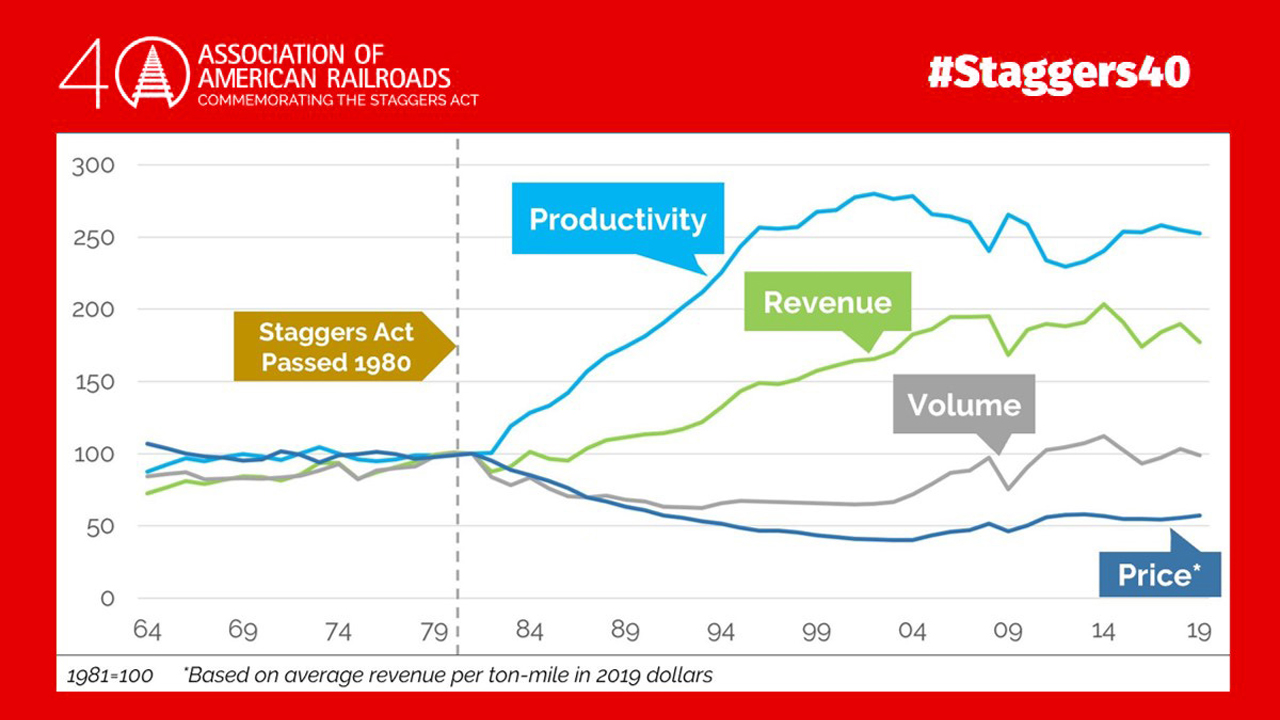 The photo below shows President Carter signing the Staggers Rail Act into law on Oct. 14, 1980. Representative Harley O. Staggers (D-W.Va.), sponsor of the bill, stands to the President’s right. Staggers (1907-1991) was chair of the House Interstate and Foreign Commerce Committee. But directly behind Carter is the person most responsible for crafting the actual legislation, Rep. James J. Florio (D-N.J.) chair of the House Transportation Subcommittee.

“The stakeholders were hard talking, frequently adversarial, larger than life personalities—some of them zealots,” Florio, now 83, told Wilner in describing the tough negotiations he oversaw to craft Staggers. Florio called Staggers a bipartisan “rational solution” to the rail industry’s problems.

“Who would have ‘thunk’ that the force de frappe liberating railroads from decades of financially debilitating regulatory overreach would consist primarily of a Montana dry cleaner, a Pennsylvania insurance salesman, a Georgia peanut farmer, an amateur boxer from Brooklyn, N.Y., and a one-time taxicab entrepreneur? Only in America,” writes Frank N. Wilner in his upcoming book, Railroads and Economic Regulation: An Insider’s Account, to be published by Simmons-Boardman Books in spring 2021.

“The former Montana dry cleaner was Rep. Dick Shoup (R-Mont.), who marshaled bipartisan support for the Regional Rail Reorganization (3-R) Act. The one-time insurance salesman was Rep. Fred Rooney (D-Pa.), catalyst for House passage of the Railroad Revitalization and Regulation Reform (4-R) Act. The peanut farmer was President Jimmy Carter, who pushed for and signed into law the 1980 Staggers Rail Act, partially deregulating railroads. The once amateur boxer was Rep. James J. Florio (D-N.J.), principal author and House floor manager of the Staggers Rail Act. And the former taxicab entrepreneur was Rep. Ed Madigan (R-Ill.), who worked across the congressional aisle with Florio in support of rail deregulation.”

As validation of the “Insider’s Account” portion of the title, Wilner’s book contains insight such as:

“As the Staggers Rail Act was being readied for a final vote by the House and Senate in September 1980, there surfaced a letter written by Union Pacific CEO James H. Evans that nearly scuttled the entire effort. In inviting fellow rail CEOs to a breakfast meeting with Transportation Secretary [Neil] Goldschmidt, Evans included on the invitation list Robert S. Strauss, former chairman of the Democratic National Committee, who then was serving as chairman of President Carter’s 1980 reelection campaign. Evans said Strauss would speak ‘about the [financial] needs of the Democratic National Committee.’

“When Republicans on the House-Senate conference committee learned of the planned meeting and its intent, they sensed a political payoff, and refused to sign the conference report, which could have prevented final voting and effectively killed the Staggers Rail Act. Evans quickly canceled the meeting, with Goldschmidt saying the timing was ‘coincidental.’ Republicans then signed the conference report. The House and Senate approved the compromised measure, and President Carter signed it into law on Oct. 14, 1980.”

Forty years later, the AAR is reminding legislators—most of whom were not around to witness the destructive toll decades of stultifying regulation had taken upon the railroads—that “Staggers has stood the test of time and remains just as relevant and essential in 2020 as it was in 1980,” Jefferies said. “In the face of a dynamic competitive landscape, the smart regulatory framework, which predominately relies on market forces to govern rail rates, still empowers railroads to invest, innovate and deliver for customers and communities every day … as the nation continues to grapple with the COVID-19 pandemic and challenging economic conditions.”

Through an online #Staggers40 campaign, a new digital hub, select event participation and outreach to policymakers, the AAR “is celebrating the milestone while emphasizing to the U.S. Surface Transportation Board and Congress the critical nature of the landmark legislation that helped make the U.S. freight rail network one of the safest, most efficient and cost-effective transportation networks in the world.”

Railroads were joined in this effort by what AAR describes as “a broad, bipartisan coalition of more than 1,000 individuals writing to the STB and Congress, affirming why this groundbreaking regulatory framework has stood the test of time and remains foundational to the industry and the broader economy’s future success. The letter is signed by seven past U.S. Transportation Secretaries, former Members of Congress, prior Administration officials and experts from the nation’s most prominent think tanks, as well as state and local officials representing communities across the nation.”

Ian Jefferies penned an editorial, “When Democrats Were Deregulators,” in the Oct. 14 Wall Street Journal emphasizing that the benefits of targeted regulatory reform are not defined by political affiliation:

“The term ‘deregulation’ has become polarized in Washington,” Jefferies wrote. “But there was a time when both parties could agree on the benefit of targeted regulatory reform” that “recognized that railroads operate in competitive markets and should price their services according to market demand and operate over their most efficient routes … U.S. freight railroads play an integral role in the economy today because Democrats and Republicans collaborated to balance market forces and rate regulation … The Staggers Act is an example of deregulation done right.”

“Partial deregulation was chosen over nationalization, which would have cost taxpayers billions of dollars,” Jefferies noted. “By allowing large railroads to shed inefficient, low-density or unprofitable lines to focus on core businesses, the Staggers Act not only improved service along the main line network; it helped give birth to a short line rail industry that today operates 50,000 miles of the 140,000-mile network that spans across the United States.

“The Staggers Act maintained ample protections for customers that lack effective competition. The market is allowed to work where competition exists, while the government can intervene where it doesn’t … The Staggers Act continues to provide economic dividends … Since 1980, freight railroads have poured more than $710 billion of their own funds back into their operations. Average rail rates are 43% lower today than in 1981 when adjusted for inflation. This translates into at least $10 billion in annual savings for U.S. consumers. Safety and service are at historically high levels.”