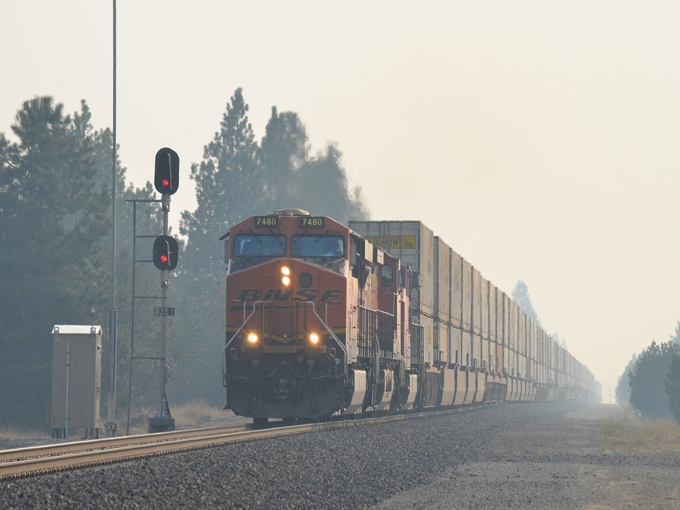 Aside from unconfirmed reports of isolated tie damage to one Idaho short line, and moments of suspended service on both short lines and Class Is, the dozens of wildfires raging throughout the Northwest have, so far, caused no widespread damage to railway property. That’s remarkable considering the fact that one of the fires, the more than 280,000-acre Okanogan Complex in north central Washington, has been deemed that state’s largest wildfire in recorded history and is currently considered the number one fire priority in the nation. More than 1,200 firefighters are tackling that blaze alone, coming from as far away as Arizona, the East Coast, Australia, and New Zealand.

“Knock on wood…no damages at this time,” was the assessment on August 24 from Kelly Driver, manager of the Pend Oreille Valley Railroad (POVA). Headquartered in Usk, Wash., the 85-mile short line has been surrounded by wildfires for more than a week. In keeping with a summer-time tradition found on many Northwest short lines, Driver says, “We have a hyrail unit equipped with a water tank that follows behind our train to watch for issues and to be prepared to put out any fires that may start.”

Steve Gibson at Eastern Washington Gateway (EWG), which runs 107 mile from Cheney to Coulee City, Wash., says “So far, no track issues of date.” However, he notes, “Smoke content in the air has caused us to cancel a couple of moves, as breathing can be, at times, critical.”

Union Pacific spokesman Francisco Castillo says, “We have not experienced any major issues related to recent wildfires. Our focus has been on preventative measures, so that we’re ready to respond in the event wildfires were to reach UP property.” Those measures include having water tenders staged throughout critical mountain pass territory at locations including Oroville and Dunsmuir, Calif., and Pendleton, Ore., as well as having UP personnel who monitor U.S. Forest Service wildfire data 24/7.

In a service advisory posted on August 21, BNSF said, “Wildfires remain a continued concern across the inland Pacific Northwest. There are currently about 100 large fires impacting parts of Idaho, Oregon, Montana, Washington, and California.” BNSF spokesman Gus Melonas says, “The fires in Washington state have not impacted our main lines, yards, or sidings. We are taking extra precautions with welding and grinding procedures, and monitoring weather and fire patterns.”

In Montana, however, BNSF has been making local news headlines with its all-out effort to protect critical company infrastructure near the small community of Essex, along the southern edge of Glacier National Park. On August 20, BNSF temporarily suspended train service through that section of its Northern Corridor (detouring several trains via Montana Rail Link) in order to safely move firefighters and equipment into action. The railroad said, “BNSF has deployed resources from across the company’s rail network to assist in firefighting efforts, including eight professional contract firefighters, water tank cars, air monitoring equipment, and a specialized fire response train from Spokane, Wash.”

Of chief concern for BNSF are the wooden snowsheds and steel bridges with wooden ties or decking located just east of Essex. Work trains and hyrail vehicles have been ferrying fire crews to those remote sites, ahead of the advancing fire. On August 26, BNSF spokeswoman Roxanne Butler said there are two shifts working around the clock to clear a 100- to 200-foot fuel break along the right of way. As much as six acres of dense brush is being cleared each day from the railway perimeter. “It should take four or five days more to finish up,” Butler said.

The work being done alongside BNSF property in Montana is similar to what UP has begun doing on its route over Donner Pass in California. UP says it’s creating a 70-foot-wide firebreak centered on its main track between Rocklin and Soda Springs, Calif. UP estimates it spends $20 million annually on vegetation control in its Western region. Recently, that included investment in a snowblower which UP says does a remarkably good job of blowing pine needles and other flammable debris from between the rails and ties during the summer months.

Preemptive removal of fuels, coupled with staging and rapid deployment of firefighting resources, have thus far helped to keep BNSF, UP, and other railroads up and running during this record-setting wildfire season.