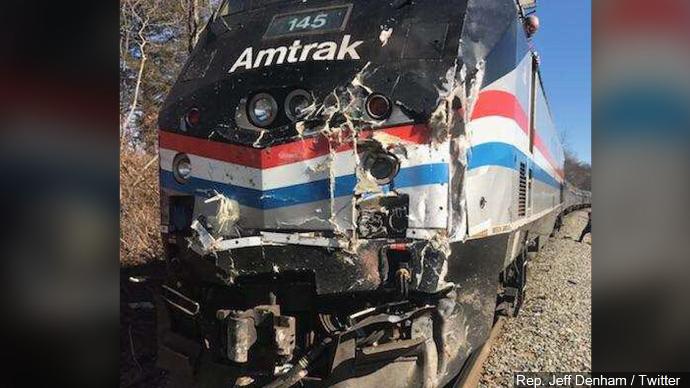 Damage to the Amtrak locomotive involved in a crash at Crozet, Va., on Jan. 31, 2018. Photo: Rep. Jeff Denham via Twitter

National Transportation Safety Board investigators are looking into whether a garbage truck drove around crossing gates before it was struck by an Amtrak charter carrying dozens of Republicans to a retreat Wednesday, killing a passenger in the truck and and injuring others.

About 100 GOP members of Congress, some with their families along, were traveling to a strategy retreat at the Greenbrier resort in White Sulphur Springs, W.Va., when the train collided with the truck about 11:20 a.m. Jan. 31 in Crozet, 125 miles southwest of Washington D.C. A man inside the truck died at the scene despite first aid by lawmaker-doctors traveling aboard the train. The driver was injured and transprted to a local hospital.

The track where the crash occurred is owned by the Buckingham Branch Railroad, a Class III short line operating in central Virginia. The track is rated for 60 mph traffic. Other than Amtrak’s three-times-per-week Cardinal, it does not see regular passenger traffic. 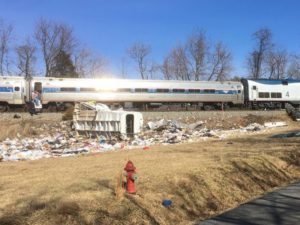 Probers were working to download data from the train’s event recorder.

Photos taken at the scene show damage to the nose of the Amtrak P42DC locomotive, and the crushed truck lying amid scattered trash along the right-of-way.