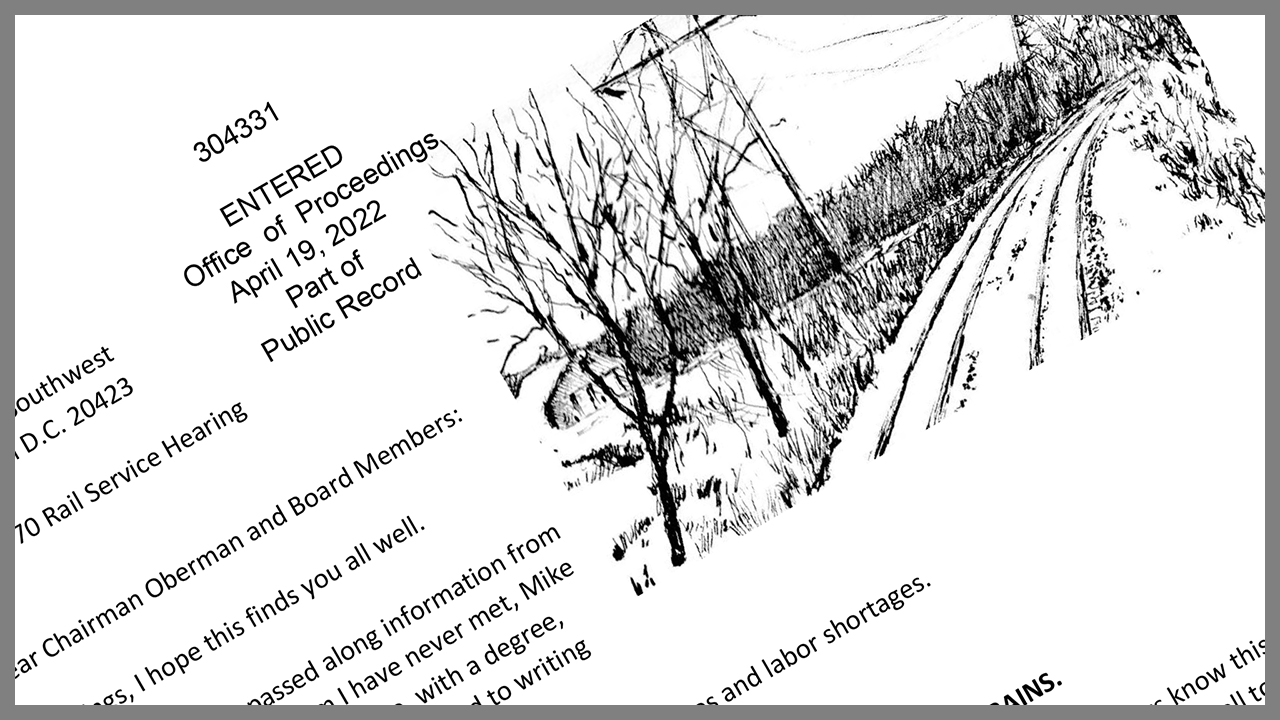 Editor’s Note: The Surface Transportation Board is conducting an in-person hearing April 26-27 (EP 770, Urgent Issues in Freight Rail Service) with the CEOs of the “Big Four” Class I railroads—BNSF, CSX, Norfolk Southern and Union Pacific—on service problems. Class I locomotive engineer Matthew DeLay, without identifying his employer, sent this letter to STB Chairman Marty Oberman on April 19 as commentary for the hearing. It was entered into the Public Record by the STB Office of Proceedings on April 19. It is reproduced here in its entirety, with only minor edits. The opinions expressed here are those of Mr. DeLay, not Railway Age. – William C. Vantuono

Dear Chairman Oberman and Board Members:

Greetings, I hope this finds you all well. A fellow engineer passed along information from another engineer, who I have never met, Mike, 17 years an engineer, like me, with a degree, like me (art, English), which has led to writing this body. The issues before you are customer service shortages and labor shortages. I will address one issue on the topic of service shortages: Precision Scheduled Railroad (PSR) monster trains.

The Surface Transportation Board already knows this; the FRA knows this, the shippers know this; the car owners/lessees know this, the executives know this; and certainly the front line knows all too well: It is impossible to get goods to market in a timely way, when the train has derailed. Monster trains keep derailing to the point where it seems, from almost all the above parties, this has become normalized and acceptable. What other conclusion can one come to: It keeps happening, on a routine basis.

Derailments of monster trains have become so frequent, that in my little section of the U.S. economy (although a major artery) it has become a blur. It is hard to keep them straight. By last summer, 2021, I thought CNN would just keep a helicopter out here, dedicated to the State of Iowa alone for aerials of the most recent spectacle. And just two weeks back, March 2022, one monster train, eastbound, derailed into a westbound train on adjacent track! Fate had it that both crews were ok. Yet: Is counting on miracles a valid operating model?

I can only conjecture what is driving all this, but all parties know, and are being driven by something, something that needs to be reigned in. For myself: I believe it is Wall Street greed and investor demands. 16,450-foot trains weighing more than 42 million pounds are gratifying someone with power. Someone who wants it all and more. I believe it is those few, who live nowhere near here, who own their own private islands and jets. This is far removed from laissez faire economics, or the neo liberal model, coming out of the 1980s.

Now we must ask: Are we yet a country by and for the people, or for the few? You might not realize it, driving by a train on the road, but the infrastructure expresses something of the values and preferences of a society. It is an ever-changing barometer. The needle has now been buried to the side of winner-take-all greed: four plus years.

Here, I might expand on something Mike mentioned: “Railroaders are paid for the inconvenience of their time.” It is an old saw, and it has some truth. I myself have made that Faustian Bargain. I have given up enormous amounts of home and family life for insurance, for a living wage, for a trade that is respectable. I do this for my family, which I simultaneously do not get to see. So I rationalize it.

Yet I do bristle that I am paid mainly for this inconvenience. Here’s why: It takes one’s life blood to learn and apply this trade. To run even a, say, “simple” traditional grain train—6,700 feet, 28 million pounds—through the ice fog of a late February night, applying the physics of the horsepower and weight to a landscape you cannot see, but must know—every inch of, every hill and dip, every crossing, every signal mast is something no office worker can imagine. It is lived truth. Not one mistake can be erased, filed away.

This is what I am paid to do. But Mike is right: Not everyone can do it; it is a learned skill. I ask you to imagine the hardest thing you ever tried to get good at, that took you to the very quick of your being, and imagine, at the same time, that should you make any mistake, it can all be washed away. And these monster trains over the past four years? Because there is an underlying workforce with this hard won knowledge, they succeed far more than they might otherwise. Yet our trade is being degraded, blame is invariably laid at our feet, the default reflex of the industry—and to a large degree, as evidenced by FRA reports governing derailments—you will see the worker here, too, is guilty until proven innocent. It is time for the FRA to examine satellite reports and back-office servers in these investigations. While that may be much harder than drawing a blood sample out of my system, as if I were a veterinary specimen, it needs to be looked into, by the government, along with these extreme PSR practices.

Meanwhile, I assure you, waiting for that call to run a 16,450-foot PSR train is dreadful: We all know what can happen, at any moment. A pallor of dread for 12 to more than 17 hours awaits. These trains are not already big enough for the carrier: We must pick up more cars for the PSR dream, with a conductor 13,800-feet away, reversing into a rail yard for more cars.

No railroader I know, were he or she made CEO, would continue this operational model. He or she would know it was not in their interest. In a generous mood, I believe the CEOs know, too. But they are being driven. They are being driven by a force that the regulatory body alone must step in and control. Gentleman and ladies: It is time to use the authority that is yours. The time for studies (as in the last spending bill) has passed. I ask you to take charge of this situation. If extreme greed is like an addiction, it is time for an intervention. If the SEC should have stopped Madoff; the STB and the FRA should stop Precision Scheduled Railroading, PSR.

“PSR has [made] engineer’s trains almost impossible to control. Shareholders roll the dice with communities, cities and the environment daily. They don’t live here. Trains have more than doubled in length. Imagine a train 16,400 feet in length weighing 17,500 tons: That is three miles, 560 feet and 35 million pounds. One train. And it is hauling hazmat, tanks of say, chlorine gas, or anhydrous ammonia. Just one tank car alone weighs 131 tons, that is 262,000 pounds. To give an example from history, 262,000 pounds of chlorine gas is approximately two-thirds of what the German army used during the trench warfare of all of WWI. One tank car alone.

“And then we pick up more enroute! My conductor is three miles away while I reverse this train into an active rail yard! Crossings don’t matter, and communities? Are you kidding? No sane country would move materials like this. These trains exceed the coupler and drawbar limits of the very cars themselves. The risks the Class I carriers are taking is a race to disaster. It is absolutely dreadful and grotesque.

Another Precision Scheduled Railroading factor in supply chain failure: Even when the majority of these PSR trains make it, without dramatic ends, they rarely get across the road during a crew members hours of service (HOS) time limit, which is 12 hours. Several factors:

“The rail infrastructure, in particular rail yards and sidings, were designed and built during the great Industrial Age. They did a lot of things right: they overbuilt bridges, for one. But it is not a failure of imagination that they could not foresee, from a sane perspective, that someday the bosses would want to normalize 15,000-foot trains.

“Yards and sidings do not accommodate this scale. It is a clash of function and design. So, imagine this: A 15,800-foot train with distributed power locomotives placed in the middle and at the rear of a train, comes to work a station with 4,500-foot tracks and needs to pick up and set out cars in the middle and rear of the train. This will not be lickety-split.

“Yes: Crew after crew expires on HOS. It is incredibly tense work shoving 12,720 feet of train, with a human being holding on all the way back there, well over two miles away, in reverse, into a rail yard, to pick up, say, 23 more cars. To then add those cars and run a battery of required air tests on the train, before departure. The scale of these trains compounds the time required to make these moves many-fold. Sometimes, in the winter, the train’s brake system cannot be adequately recharged to allow the train to depart. And while this is happening, another monster train is waiting outside town (losing on-duty time) to do more of the same! Now, both trains need to be recrewed. This is another reason people are leaving: There is no human being I know who can take being called at 7 PM for a 9 PM job, and go through this to finally arrive at the hotel at 2 PM, without an impact on their wellbeing. It is brutal.”

Should the industry show any of the ample pictures they must have of crews falling asleep or being portrayed as useless lumps, keep this extreme reality in mind: We are human, we are exhausted. It is getting worse. People are leaving.

What about any of you? Are you hiring? 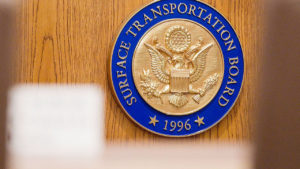