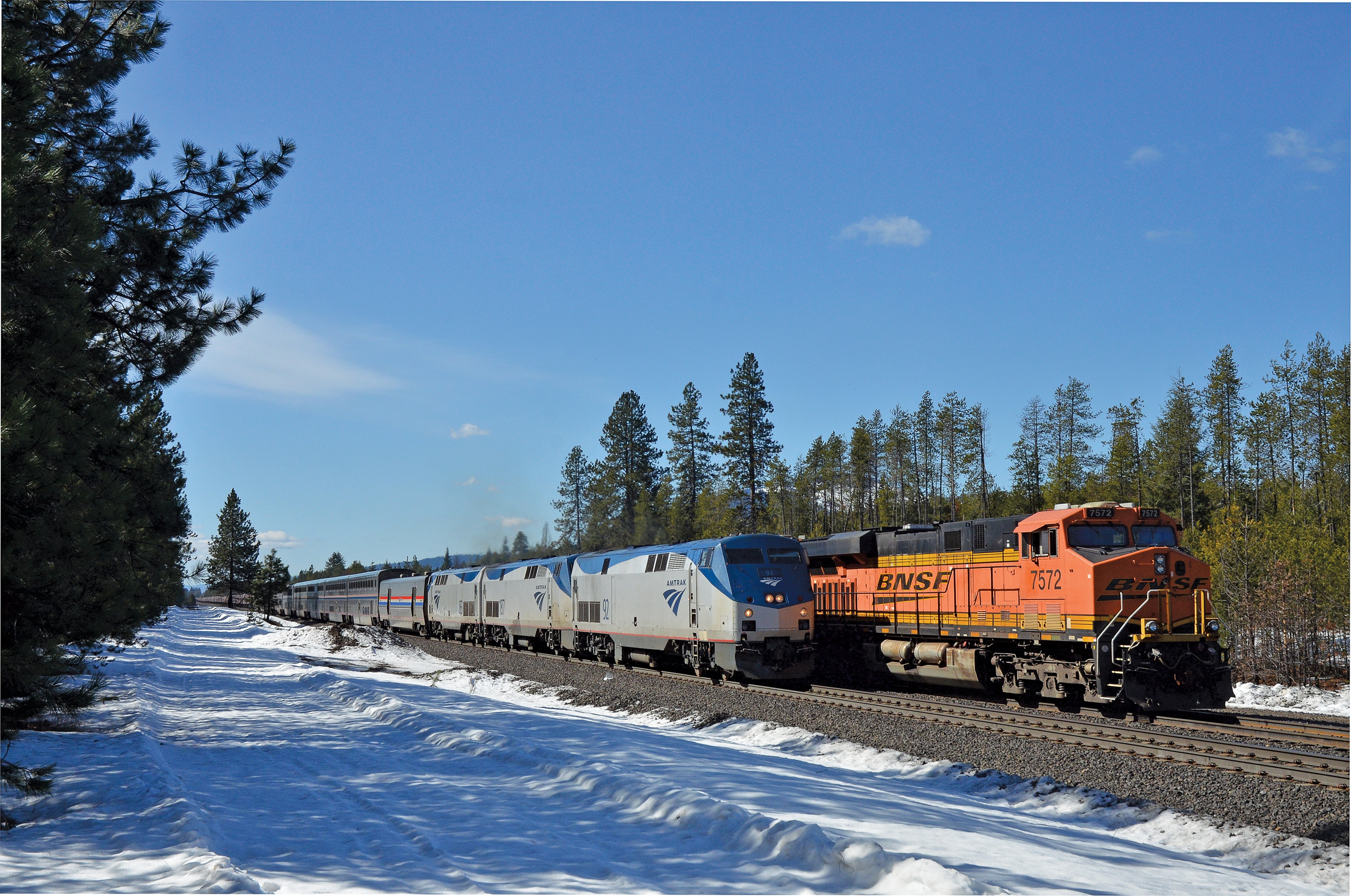 Deep snowpack at higher elevations, an early spring thaw, and heavy rainfall are severely affecting rail lines in the Pacific Northwest, particularly in the panhandle of northern Idaho.

At one point during the past week, the main lines of BNSF, Union Pacific, and Montana Rail Link were all suffering service disruptions simultaneously, shutting off an important freight corridor to and from the Northwest, with Amtrak’s Empire Builder getting caught up in the fray.

On March 15, a section of rain-saturated roadbed on UP’s main line five miles north of Moyie Springs, Idaho, gave way under a passing grain train, sending several loaded hoppers down a steep embankment. No injuries were reported. While crews spent the next several days repairing this vital UP connection to the Canadian border, local service was maintained to customers throughout northern Idaho, including interchange traffic off of short line Pend Oreille Valley Railroad at Sandpoint. Through service on UP’s line to Canada was restored as of March 19.

On March 16, a series of landslides in the Kootenai River Canyon blocked BNSF’s Northern Corridor at Katka, Idaho, just west of the Montana state line. Service was restored through Katka by early the next day. Among the first trains through were Amtrak’s westbound Empire Builder, which had been held overnight in Whitefish, Mont., and the eastbound Empire Builder, which had waited in Spokane, Wash.

Early on March 17, while BNSF was still cleaning up its Katka slide, a washout on MRL at Kootenai, Idaho, just east of MRL’s connection with BNSF at Sandpoint caused the derailment of more than 50 cars and a rear DPU locomotive on an empty coal train. MRL reported no injuries and no hazmat material released in the incident. Traffic was able to begin moving through the siding at Kootenai on March 18 while work to clear and restore the main line there continued.

Following more heavy rain, BNSF reported additional landslides near Katka on the afternoon of March 18. Once again, Amtrak’s Empire Builder service was held westbound at Whitefish and eastbound at Spokane. Amtrak arranged for special equipment moves to allow an extra departure of westbounds Nos. 7 (to Seattle) and 27 (to Portland) out of Spokane the morning of March 19 while the regularly scheduled No. 7 was delayed east of the Katka slide zone. By mid-morning of March 19 Katka was reopened, allowing Amtrak and BNSF trains to begin moving between Spokane and Whitefish.

While there continues to be widespread reports of flooding, washouts, and track slippage in northern Idaho, some trains have been detoured over alternate routes. But, with BNSF, UP, and MRL normally moving a combined flow of more than 70 trains per day through the Sandpoint-Spokane area, intermittent service outages are causing a substantial back-up of traffic into neighboring states and Canada, as well.

Elsewhere in the Northwest, short lines have been suffering their own washouts and flooding, while BNSF has struggled with high water on its main line between Spokane and Pasco, Wash. Early on March 19, Amtrak reported a service disruption due to landslides between Edmonds and Everett, Wash. Amtrak in a statement said that BNSF, which owns the tracks, has suspended all traffic in the area for 48 hours, until March 21.