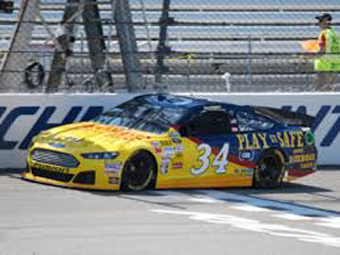 CSX and Sprint Cup Series driver David Ragan will take to the famed Brickyard to remind fans to “Play It Safe” around railroad tracks. CSX is the primary sponsor of Ragan's No. 34 Ford Fusion for the July 28 Samuel Deeds 400 NASCAR Sprint Cup Series race at Indianapolis Motor Speedway, one of the premier events and venues in auto racing.

CSX’s initial one-race primary sponsorship (Richmond in April) expanded to include the All-Star race and the Indianapolis event after Ragan won Front Row Motorsports’ first race in team history at Talladega in May.

“We’re proud to partner with the team that has been most associated with driver safety,” says Terry Ludban, CSX Director of Community Affairs. “David is a great spokesperson, and we hope his passion for this issue will translate into helping us make the roads and our rails safer. If we save just one life, it’s worth it.”

The weekend’s partnership will give fans the opportunity to see their name on Ragan’s racecar. CSX and the No. 34 team will collect signatures of fans who promise to “Play It Safe” around railroad tracks on Saturday at the speedway. Fans have been stopping by the No. 34 hauler in the Sprint Cup garage to sign a special “I Promise To Brake For Trains” decal that will be applied to the hood of the No. 34 for Sunday’s Samuel Deeds 400 at the Brickyard. 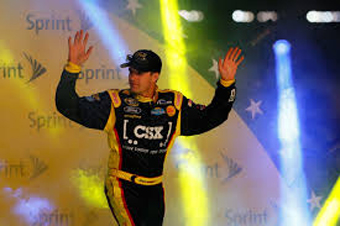 “To have the CSX colors on our car, reminding people to ‘Play It Safe’ around railroad tracks, is pretty special,” says David Ragan. “We’re got to spend time with some CSX employees at their railyard in Indianapolis. It’s been a fun weekend to have these guys and girls around and reminding everyone to play it safe around the railroad tracks.

“I got to spend some time once before on one of the CSX locomotives down in Jacksonville, where CSX’s home office is. They’ve got some pretty neat pieces of equipment and some pretty special employees that know what to do. It’s neat to hang around those guys. I’m sure it’s equally as special for them to come and see us at the racetrack and see the racecar. But for us to go see what they do and how they move millions of tons of freight and cargo throughout the U.S. is cool. And they do it pretty efficiently. It’s amazing to get a firsthand look at what CSX does. 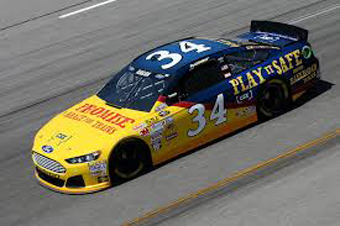 “The Indianapolis Motor Speedway is a great place to go to, and it’s great to have a NASCAR presence there. You always have our premier events like Daytona, Darlington, and Charlotte, but the Indy weekend is certainly a big weekend for us, too. Hard to believe it’s the 20th anniversary of NASCAR going to the Brickyard. It doesn’t seem like it’s been that long.

“Every corner is unique. It may look all symmetrical, but every corner has different characteristics on how you can enter, how hard you can go, where you can race side by side. It’s a great feeling to get a perfect lap like when we sat on the pole a couple years ago. You’ve got to hit your marks and it just felt really, really good. And that’s the feel we’ll look to have again with our CSX Ford. The Fords always run well up there.”

Tune in to ESPN beginning at 1:00 p.m. for full race coverage.