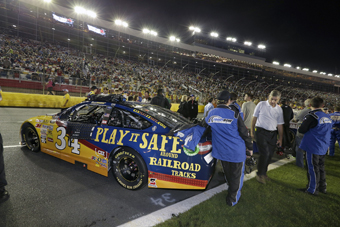 Handling problems with the Front Row Motorsports no. 34 Ford Fusion may have kept driver David Ragan from running near the front of the 22-car field during the May 18 NASCAR Sprint Cup All Star Race, but they certainly didn’t keep CSX’s “Play It Safe Around Railroad Tracks” public safety message out of the national spotlight.

For the first time, Front Row Motorsports put a driver into the All-Star Race based on a team win, with Ragan earning a starting spot after winning a thrilling two-lap green-white-checkers finish at Talladega on May 5. Ragan qualified 14th for the Saturday night exhibition event, which featured four 20-lap segments and a final 10-lap dash.

Ragan and his sleek blue and gold CSX ride were introduced with much fanfare just prior to the All Star Race, putting the railroad’s safety message in front of millions of television viewers and the thousands of fans that packed Charlotte Motor Speedway for—next to the Daytona 500—NASCAR’s most prestigious event. 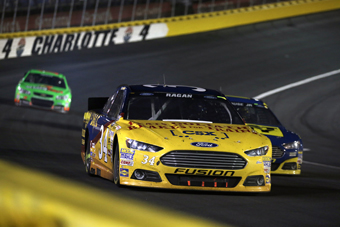 From the get-go, Ragan said his CSX Ford felt tight (understeering) through the turns and did not grip the track as well as he’d have liked. Concerns about the car were put on hold after eight laps, though, when a rain shower moved in and forced a 41-minute red-flag period.

When the field returned to green-flag racing, Ragan was 19th. Throughout the first four segments, crew chief Jay Guy and the Front Row Motorsports team made numerous adjustments to help the car turn better in the center and get more overall grip. The efforts helped, but not enough for Ragan to make a significant charge through the 22-car field. 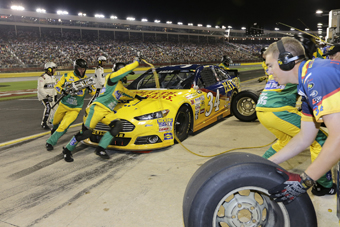 When the green flag waved on the 10-lap final segment, Ragan was in 20th. He was able to climb one additional spot to finish the race in 19th.

“It was a good effort by our CSX team,” Ragan said following the race. “We never really had the grip we needed all night, though. But I’m proud of this team for making the All Star Race based on 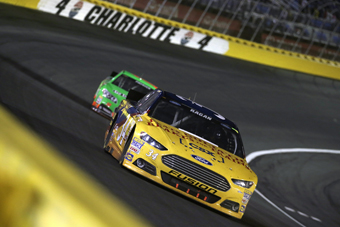 our Talladega win. The guys did a good job on pit road and we learned some things that will definitely help us out next week. And thanks to CSX! It was great having them aboard for such a big event.”