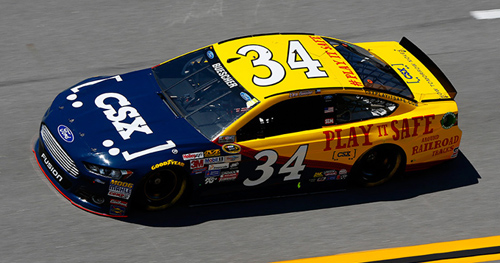 For a fourth consecutive season, CSX and Front Row Motorsports will join forces to promote public safety around railroad tracks with the No. 34 “Play It Safe” Ford Fusion in NASCAR’s 2016 Sprint Cup Series. This season, 2015 Xfinity Series Champion and 2016 Sprint Cup Series Rookie of the Year candidate Chris Buescher will drive the 34, which will be powered by Ford engines sourced from Roush-Yates Engines.

CSX will be the 34’s prime sponsor for eight races, including events at Atlanta Motor Speedway (Feb. 28), Martinsville (April 3), Talladega (April 30), Charlotte (May 29), Michigan (June 12), New Hampshire (July 17), Watkins Glen International (Aug. 7), Richmond International Raceway (Sept. 10) and Dover (Del., Oct. 2). The 23-year-old Buescher “will serve as an ambassador to 18- to 34-year-old males among NASCAR’s fan base, the demographic mostly likely to be involved in a train collision and the targeted audience of CSX’s safety campaign,” CSX said.

Buescher worked with CSX in 2015 when he drove the No. 34 in several races in the latter part of the season, and says he “really respects what they’re doing with their NASCAR program. It’s all about safety and spreading the message to race fans. If we can reach people and prevent even one collision, it’ll be a successful campaign.”

CSX has partnered with Front Row Motorsports for the past three Sprint Cup Series seasons to spread the message to “Play It Safe” around railroad tracks and to “Brake for Trains.” The No. 34’s graphics feature CSX’s blue and gold locomotive livery, with the CSX logo emblazoned on the hood of the 850-hp racecar.

“We are thrilled to have a champion driver like Chris Buescher in the CSX ‘Play It Safe’ car in our fourth season with Front Row Motorsports,” said John Claybrooks, CSX Director, Brand and Marketing Communications. “They both understand our cause and safety message as we strive to keep people safe around railroad tracks.”

“At CSX, safety is a way of life, and our NASCAR sponsorship continues to help CSX promote railroad safety education across our network,” said CSX Vice President of Safety Jim Marks. “We can reach a large, key demographic to remind race fans to not stop, walk or play on the tracks or near crossings and encourage them to use safe driving practices at railroad crossings.”

With engines supplied by Roush-Yates, Front Row Motorsports, which will field two Sprint Cup Ford Fusions this season—the 34, and the 38, driven by 26-year-old Landon Cassill—is looking forward to solid performances and strong finishes.

Buescher and the Sprint Cup Series field will first hit the track for the Can-Am Duels, the qualifying races for the Daytona 500, on Thursday, Feb. 18, at Daytona International Speedway. The “Great American Race” is scheduled for Sunday, Feb. 21, at 1 p.m. ET and will air on FOX.