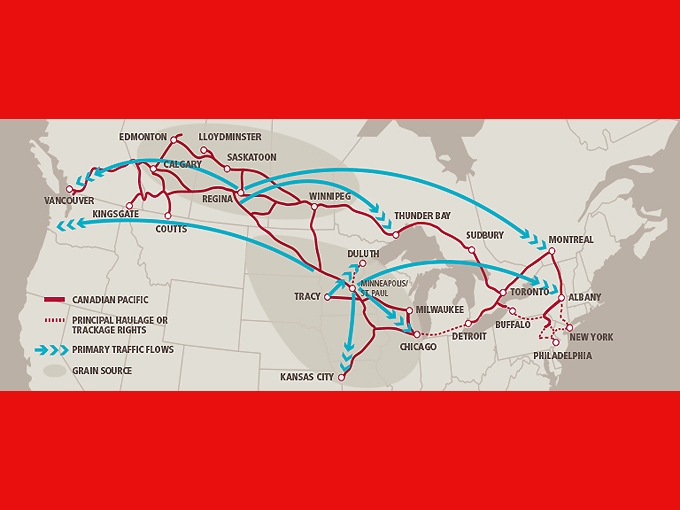 Canadian Pacific says it “is well positioned to provide best-in-class service to western Canadian grain shippers during the 2015-2016 crop-year.”

CP’s Dedicated Train Program (DTP), introduced in the 2014-2015 crop year, helped the railroad move a record 276,154 carloads (27,849,434 tons) of Canadian grain and grain products from western Canadian origins, up from the previous record crop year of 2013-2014. DTP, CP says, “provides customers with greater clarity and control of car supply to manage their supply chains. CP anticipates adding more trains to the program this crop year as it responds to greater demand to move grain and grain products from western Canada. Our service offering to grain customers is driven by efficiency and creating velocity in the rail portion of the complex grain supply chain.”

DTP, designed for unit grain trains, serves approximately 70% of CP’s grain operation, according to Vice President Sales and Marketing, Bulk John Brooks. “Customer feedback has been overwhelmingly positive,” he said. “DTP is based on the fact that unit train shippers know their business the best, allowing them to determine origin and destination and to manage their supply chain velocity.”

For non-unit train shippers, CP’s Open Distribution service “is segmented to better fulfill the shipping needs to these end-markets,” said Brooks. “Customers who do not qualify for DTP, or choose not to sign up for the program, can order cars in the Open Distribution program. Open Distribution allows shippers to input orders for four weeks, and as orders are filled, new orders can be placed. We continue to offer valuable and efficient service to our less than unit train customers via Open Distribution. This service is informed by ongoing and collaborative discussions with shippers and coordination through the Canadian Grain Commission for producer car loaders. We are constantly working to recognize and meet the differing needs of all the customers we serve.”

DTP and Open Distribution, Brooks said, “are collaborative programs that give flexible options to our customers both large and small. CP has stressed and will continue to stress that the complex Canadian grain supply chain must operate on a 24/7 basis to support balanced pipelines, reduce congestion and drive velocity.”

“CP’s Dedicated Train Program has created efficiencies for Viterra while allowing greater flexibility of train placement to ensure the right grain is moving to export position,” said Kyle Jeworski, CEO of Viterra, one of Canada’s largest grain producers. “The program is a positive step forward in the movement of Canadian grains, and we look forward to continuing to work with CP to support our overall focus on driving supply chain excellence for our farmers and destination customers.”

CP said that in 2015, it will invest 21% of its revenue on capital expenditures, a percentage “higher than any other Class I railroad. Canadian rail rates remain among the lowest in the world, having risen just 6% since 2000 even as commodity prices have soared by 166%.”

Viterra Inc. was a Canadian grain handling business, the nation’s largest grain handler, with its formative roots in prairie grain-handling co-ops, among them the Saskatchewan Wheat Pool.Viterra Inc. grew into a global agri-business with operations in Canada, the U.S., Australia, New Zealand and China. The company operated three inter-related businesses: Grain Handling & Marketing, Agri-Products and Processing. Following its $6.1 billion acquisition by Glencore International in 2013, Viterra Inc. was merged with Glencore purchaser, 8115222 Canada Inc