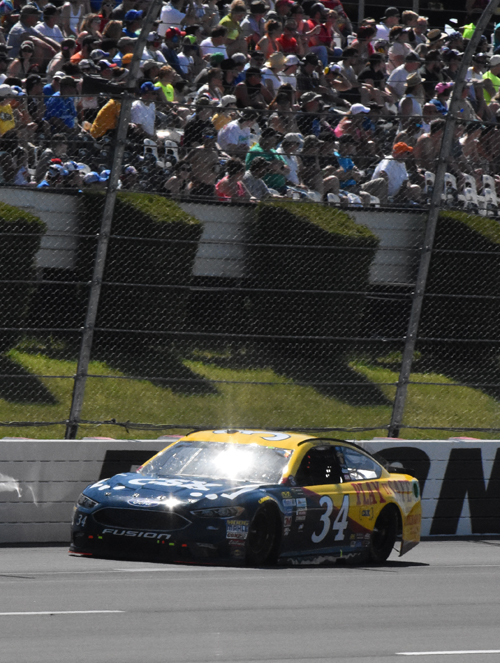 What began in 2012 as a small bumper sticker on the no. 78 Furniture Row car driven by Reagan Smith in 2013 grew into a prime sponsorship at a half-dozen races throughout the long NASCAR season with Front Row Motorsports (FRM) of Statesville, N.C., and the no. 34 Ford Fusion. The 850-hp racecar is painted and lettered in CSX’s distinctive blue and gold locomotive livery and adorned with bright red safety messages urging people to play it safe around railroad tracks, especially at highway-rail grade crossings. “At CSX, safety is a way of life, and our NASCAR sponsorship continues to help CSX promote railroad safety education across our network,” the railroad says in promoting the program, which is part of its “Beyond Our Rails” initiative. “We can reach a large, key demographic to remind race fans to not stop, walk or play on the tracks or near crossings and encourage them to use safe driving practices at railroad crossings.”

The 34 has been driven by a combination of NASCAR up-and-coming stars and veterans: David Ragan, Joe Nemecheck, Brett Moffitt, Reed Sorenson and Chris Buescher. This season, 27-year-old Landon Cassill is at the wheel. FRM sources Ford engines from Rousch-Yates.

The brainchild of now-retired CSX Vice President Corporate Communications (and avid motorsports enthusiast) Gary Sease, the public-safety-themed NASCAR program is managed by Exit10, a full-service advertising agency based in the Camden Yards Warehouse in Baltimore, Md.

“In approaching how to race Pocono Raceway, you have to be good off Turn 3,” Cassill said. “I don’t know how you tune the car for Turn 3 without hurting [how it performs in] the other two corners the most. But in my experience at Pocono, the best cars are usually equal in 1 and 2 and they kill you off Turn 3. So, if you can be good off Turn 3, you know you’re going to be good on the rest of the track. That’s what our CSX team will be focusing on during practice. Stage racing at Pocono is going to show some different strategies than we’ve seen all year. I think you’re going to see people make some really odd-looking green-flag pit stops to try to flip the grid after the end of the stage. It should be entertaining.”

Cassill started in 34th position, and after a race that saw several serious wrecks and was even red-flagged at one point for debris clean-up, finished 27th. “Our CSX Ford got better later in the race, but we just didn’t have a very good first half of the race,” Cassill said. “Early on, we had to pit early because it felt like I might have a tire going down, so that kind of messed up our strategy a little bit. And we never had a chance to fight back because we didn’t get the cautions we needed in the second half. But there were some scary incidents involving some other cars, some pretty bad wrecks, so we’re glad we were able to bring our CSX Ford through it relatively unscathed.” 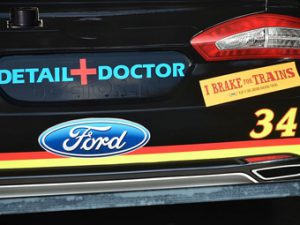