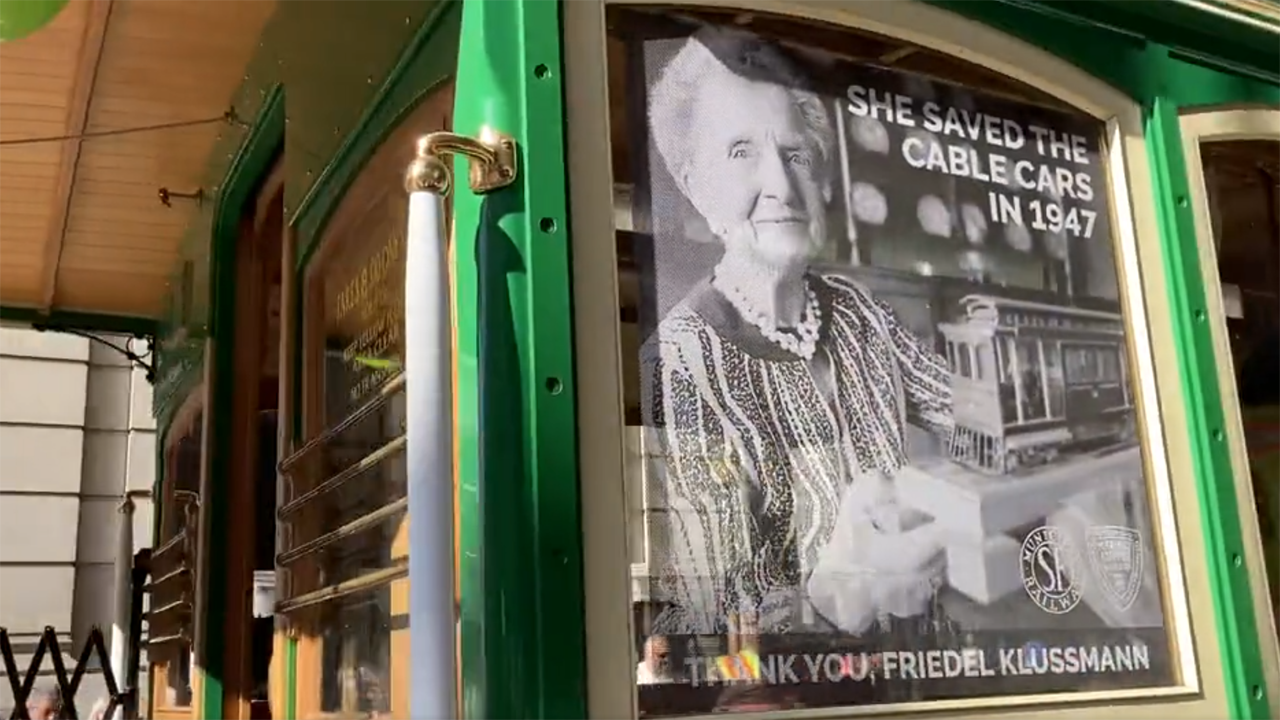 Seventy-five years ago, San Francisco’s cable cars were viewed as more of a costly nuisance. A few city leaders wanted to tear out the 1870s-era transit system of wooden vehicles towed by an underground cable system. Pioneer of civic activism, Friedel Klussmann led the charge to preserve this moving landmark that draw visitors from around the world looking to fulfill their dream of riding the cable car over our hills.

Friedel Klussmann founded the Citizens’ Committee to Save the Cable Cars. The committee began a public campaign demonstrating that the cable cars’ value to San Francisco was far greater than their operational cost. As a result, the lines were saved and the cable cars became enshrined as a cultural icon of San Francisco.

We celebrated this anniversary with Market Street Railway and Mayor London Breed on Oct. 26 at Market and Powell streets (view videos below).

Following is a brief look at the events of 75 years ago and what Klussmann and her allies did to save the system.

In the mid 1940s, San Francisco’s transit system was undergoing major changes. The entire system was in poor condition following World War II. City officials and then Mayor Roger Lapham looked to reduce costs by replacing old worn rail lines with new buses. Included in this plan was the Powell Street cable car lines, which were scheduled to be replaced with buses in 1947.

Arguing against the cable cars, Mayor Lapham and transit officials said that they were too costly to repair and operate and could not provide adequate service. The officials were backed by business leaders in Union Square and downtown, who had major influence on city policy. While there were real financial considerations at play to repair the system, the cars were also seen only as ramshackle old junk heaps bleeding money.

In an era when Americans across the country abandoned transit for shiny new cars and freeways, it’s somewhat surprising that people in San Francisco wanted to keep the cable cars alive. To these people, the Victorian Era style and unique technology gave them value. San Francisco was the birthplace of the cable car and they were a living piece of the city’s history worthy of saving.

Spearheading the fight to save the cable cars was Friedel Klussmann and the Citizens’ Committee to Save the Cable Cars. Going head to head against the most powerful men in the city, Klussmann and her women-led group rallied to keep the cars on the road.

The group investigated the situation to get the facts and led campaign after campaign to spread the word and build support for the cars. Their work brought the issue before the voters in 1947 and the city was forced to retain the Powell lines. Two years later, another vote decided that the city would acquire the California Street Cable Railroad company, which ran lines on California, Jones, Hyde and O’Farrell streets. By 1956, Klussmann and other activists had saved the cable cars but not without heavy losses. The system of five lines that existed at the beginning of the fight was cut and reconfigured into the three we see today.

Fabric of the City

Today, cable cars are as synonymous with San Francisco as summer fog and the Golden Gate Bridge. They not only provide transit service along busy corridors for locals, but also are one of the biggest visitor attractions. Each year, thousands of people from across the globe come to see and ride the cars. In 1966, the system was added to the National Register of Historic Places, enshrining them in American history.

After the system was rescued by activists and bolstered by rehabs, the cable cars became a major attraction and led to increased development of Fishermen’s Wharf as a tourism hub.

This article first appeared on the News and Blog website of the San Francisco Municipal Transportation Agency.