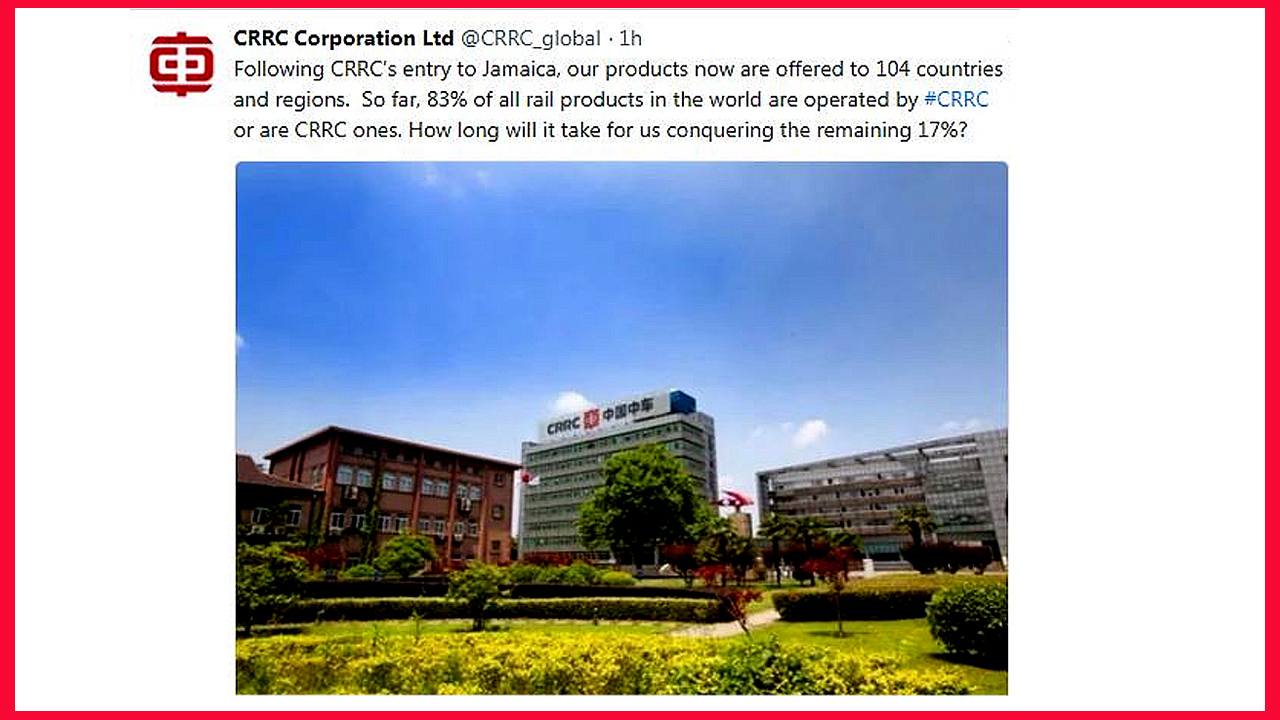 The response from my previous article, “North America Rail Supply and China: Why We Should be Concerned,” has been overwhelming and supportive. Apparently, I ripped a Band-Aid off a topic that’s been unfolding and finally being realized by many over the past decade.

As noted in that article, CRRC (China Rail Rolling Stock Corp.) has been engaged in a long-game strategy to penetrate and dominate the North American rail supply industry, both in passenger/transit rail as well as in the freight rail rolling stock industry. Equally concerning is CRRC’s adoption of a military-civil fusion strategy, linking CRRC’s global ambitions to China’s military complex.

In both of these bills, there is a multitude of new spending, additional programs and, in the case of the House bill, many interesting changes for Amtrak, along with rules for rail operators, including mandatory two-person crews, and prohibiting Mexican crews to cross the border. But, rather than focus on some of the partisan and controversial aspects of both bills, I wish to highlight one of the few features that has been completely bipartisan: requirements on procuring equipment from North American suppliers.

Included in both pieces of legislation is the Stopping America’s Foreign Enemies Through Rail and Infrastructure National Security (SAFE TRAINS) Act that prohibits procurement of freight rail rolling stock for the United States interchange rail system from State Owned Enterprises (SOEs). SAFE TRAINS is the latest in a series of bipartisan federal legislative efforts that focuses on the procurement of freight rail rolling stock.

Following the rapid success of CRRC’s bidding for major transit railcars commencing in 2014 (re Boston, Chicago, Los Angeles, Philadelphia), a coalition was formed to create awareness for our federal and state legislators and municipalities of the potential long-term negative impact should CRRC continue to aggressively penetrate the North American market.

As awareness grew of CRRC’s predatory business practices and ambitions, specific legislation started to take hold with bipartisan support. Initially, there was FIRRMA (Foreign Investment Risk Review Modernization Act), and then along came TIVSA (Transit Infrastructure Vehicle Security Act). Although this legislation hasn’t completely stopped CRRC from further market domination, it has educated many of its plans and ultimate ambitions. Armed with better information, states and municipalities, particularly in New York and Washington D.C., sought to better understand the ramifications of widespread deployment of CRRC rolling stock, ultimately deciding on Kawasaki and Hitachi Rail as their preferred transit railcar suppliers, respectively.

In addition to concerns that CRRC is out to monopolize our rail rolling stock market, as CRRC is doing globally, there were national security and economic security concerns. The SAFE TRAINS Act would also prohibit application of sensitive technology to a freight car made by an SOE, a country of concern or an entity within a country of concern that violated U.S. intellectual property rights. As transit and freight railcars become “smarter” with on-board telematics, there is growing concern over potential safety and security threats. An increasing number of freight railcars are equipped with sensitive technology (particularly railcars in hazardous material service), so the potential safety and security threats are real. Another recent example can be found in news stories of Chinese-designed surveillance technology being pulled off New York MTA systems to understand the threat is real.

With the House INVEST Act, and the Senate Surface Transportation Investment Act (S. 2016), there is considerable language focusing on the prohibition of procuring equipment from SOEs, of which CRRC is one of China’s major. SAFE TRAINS also limits freight car component content originating from SOEs or a country of concern.

It is gratifying to see legislators from both sides of the aisle recognize that CRRC is indeed a potential threat to the long-term well-being of the North American railcar and railcar component manufacturing industry and the many thousands of citizens who rely on it for their livelihoods.

The North American rail industry has benefitted enormously from its North American supply chain, with the ability to rapidly develop innovative, safe and reliable railcars and better solutions in response to ever-changing market conditions. This same supply industry is well-suited, for better or worse, to adapt rapidly to the wild demand swings this industry often sees, while remaining financially viable—not easy to do. Losing, or diminishing, this strength could harm the standing of the North American railway industry.

Get on board and support SAFE TRAINS.