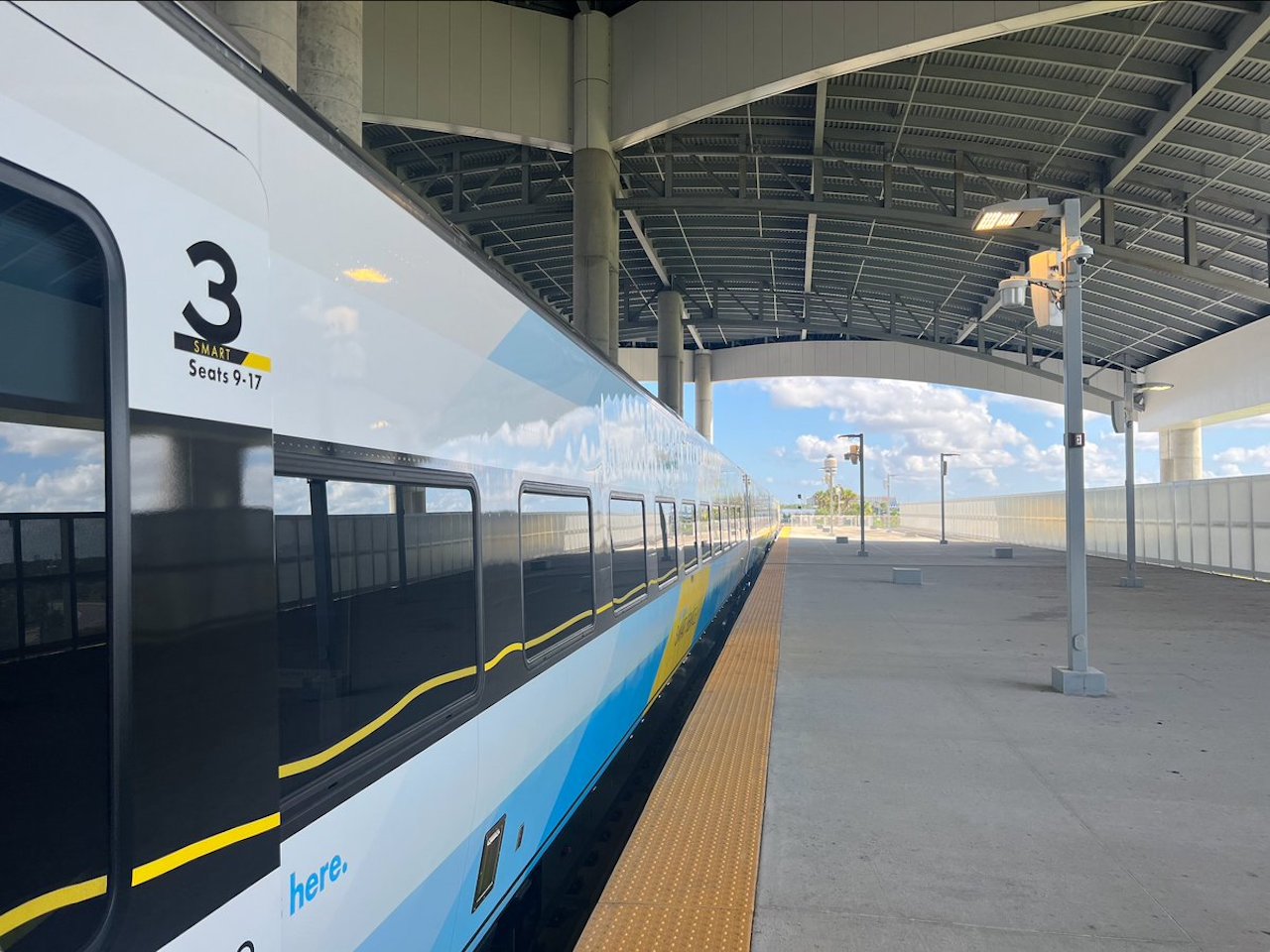 Brightline's newest trainsets will carry passengers between Orlando and South Florida. (Courtesy of Brightline via Twitter)

The two six-car trainsets, which will carry passengers between Orlando and South Florida, consist of two locomotives and four passenger coaches each. The trainsets are among five new ones to arrive in Florida in preparation for the opening of the new Orlando station.

As part of the CTA’s celebration of 75 years in service, the agency has partnered with Chicagoland-based Butcher Boy Cooking Oils to release the latest vintage-wrapped railcars on the Blue Line.

Butcher Boy Cooking Oils is sponsoring the retro-themed railcars featuring the classic mint green and alpine white look, popular on much of CTA’s ”L” fleet from the mid-1960s through the 1980s. According to CTA, this railcar design was seen around the world on many TV shows and movies filmed in Chicago during this period, including the Bob Newhart Show (1972, below), The Blues Brothers, Cooley High, Code of Silence and Adventures in Babysitting.

As part of this sponsorship, starting the week of July 25, customers can participate in a sweepstakes competition by sharing their best photo(s) of the vintage wrapped cars as they travel the Blue Line. Photos must be posted to Instagram using the hashtag #CTA75BB. Prizes include one year of free rides on CTA, paid for by Butcher Boy Cooking Oils, plus other CTA branded gifts, including t-shirts and mugs.

Last month, Red Line riders had the opportunity to ride the “classic” Chicago L train design wrapped railcars that featured the green, cream and orange-colored paint scheme from the 1950s. That installation was sponsored by The Museum of Science and Industry (MSI).

“For three-quarters of a century, the CTA has connected customers and communities to activities and opportunities, and we continue to celebrate the integral role the CTA has played in the city’s growth and progress,” the agency said. “The celebratory activities are for transit fans of all ages and backgrounds and we welcome Chicagoans to share their CTA memories with us.”

Separately, CTA has partnered with Ascend HUB Interactive (HI) to announce the official launch date of the CTA Building Small Businesses (BSB) Program, an innovative resource model and initiative “designed to increase local small business participation in large-scale, government capital improvement projects.” The BSB Program, CTA says, is the latest in a series of initiatives launched by the agency to bring equity and inclusion to all aspects of its operations.

“More than just buses and trains moving about the city, public transit is the equity equalizer for everyone, providing affordable access to jobs, schools and vital resources–regardless of one’s background or circumstances,” said CTA President Dorval R. Carter, Jr. “The BSB Program allows us to further extend the benefits of public transit to the communities we serve by providing the tools and resources small, minority-owned businesses need to properly and successfully compete for CTA and other large-scale contracting opportunities that are traditionally out of their reach.”

The BSB Program, which was officially launched on July 21 at networking and informational event, was developed to “provide financial guidance to small businesses and other Disadvantaged Business Enterprises (DBEs) by offering direct loan placement and other supports so they can demonstrate the up-front capital needed to compete on large-scale transportation construction and capital programs,” CTA said.

More than 60 local firms attended the July 21 event to learn about the BSB Program and hear from invited guest speakers, Federal Transit Administration (FTA) Administrator Nuria Fernandez and Shelby Scales, Director of the Office of Small and Disadvantaged Business Utilization at the U.S. Department of Transportation (USDOT).

For some small businesses, CTA says, working on a large construction project requires resources that many firms don’t have, including cash flow that can allow them to purchase materials ahead of being reimbursed, access to loans and other forms of credit, insurance for larger jobs, and access to IT and administrative supports. Without these tools, it can be impossible for many Chicago area small businesses to participate in construction projects.

Piloted in 2019 under the Red and Purple Modernization program Phase One, the BSB Program proved to be quite successful, according to CTA, with more than 100 Chicago area small businesses having participated in the program, of which 20 received $5.6 million in financing. This is vital for building the capacity to be ready to bid for sub-contract work on CTA projects, including becoming loan-ready to build their business, the agency added.

The program consists of free capacity-building workshops for small businesses that are certified as Disadvantaged Business Enterprises (DBE) or that are interested in becoming DBE-certified.

The BSB program provides one-on-one financial guidance and helps with prequalifying for loan packages. Firms that do not immediately prequalify for financing will be given access to direct loan placement for financial needs like mobilization, working capital for payroll, equipment and other cash flow needs. The program includes education on insurance and bonding. Qualifying firms can also receive back-office support, technical assistance and other business training.

Beyond helping DBEs compete, CTA says, the program also aims to grow the number of DBEs in the state, which is currently around 2,800, and encourages more of them to do business with the agency.

SMART, which operates 45 miles of passenger rail service from Larkspur to Santa Rosa in California’s Bay Area, saw a “significant boost” in ridership since the start of the year, with an 83% increase in total monthly riders since January, according to data released by the agency and reported by Marin Independent Journal on July 25.

The data revealed that SMART had about 41,500 riders in June compared to nearly 22,700 in January, marking June as the highest monthly total since the start of the COVID-19 pandemic, and more than doubling the almost 20,500 riders SMART carried in June 2021.

According to the data, however, ridership is still below the 55,700 passengers in June 2019 prior to the pandemic.

Like many transit agencies nationwide, SMART’s ridership took a hit in March 2020 at the onset of the pandemic and when stay-at-home orders went into effect.