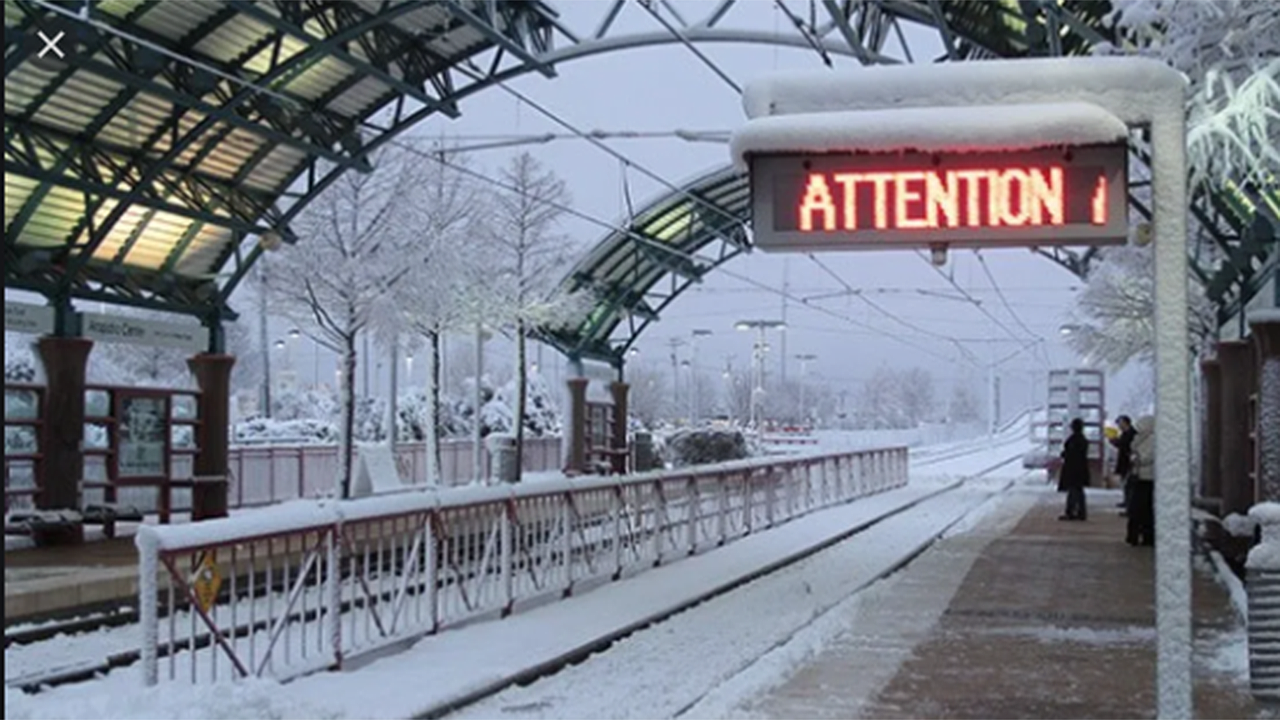 Most of the rail transit in Texas fell under Old Man Winter’s one-two punch of snow and bitter cold over most of the state, as it was gripped by historically low temperatures. As temperatures warmed up (into the 60s during the week of Feb. 21) and the snow melted, rail transit has returned to full service in Texas and as far north as St. Louis.

Trinity Railway Express (TRE), which runs trains between Dallas and Fort Worth, was the first provider in the area to come back, running a Saturday schedule on Feb. 18 and Feb. 19. (The line does not normally run on Sundays.) Trains are now running on weekday schedules. Dallas Area Rapid Transit (DART) ran a Saturday schedule on Feb. 19 and continued to run through the weekend, and is now running full weekday service, too. The Denton County A-Train, which connects with DART, has returned. TEXRail in Fort Worth, run by Trinity Metro, also started running full (half-hourly) service Feb. 22, after modified (hourly) service for four days.

Jon-Erik (AJ) Arjanen, Trinity Metro’s Vice President and COO for Rail, said: “During the past week, we modified the TEXRail service for the safety of our customers and our people. The weather conditions were unprecedented for North Texas; however, we are extremely impressed with our team and the way they handled this historic event.” In all likelihood, transit managers in the state felt the same way.

Elsewhere, Capitol Metro’s Red Line in Austin returned to service Feb. 22, as did the Purple and Green Lines of Houston’s Metro system. Metro’s Red Line, the longest line in the system came back on Feb. 19. Further north, Oklahoma City’s streetcars came back Feb. 22, too. Still further north, the Metro Blue Line in St. Louis returned to full service on Feb. 20, although the reductions there were not as severe as the outages in Texas.

While the transit woes in Texas are over, they were a small part of the difficulties that plagued the entire Lone Star State last week. The extreme cold and snow caused the electrical grid, which is isolated from the nation-wide grid system, to fail in many places. Spot prices for power spiked, which will leave some Texans who managed to keep their power with extremely high electric bills. Water infrastructure also failed in many places, compounded by the extreme cold that caused pipes to freeze and burst. National Public Radio (NPR) reported problems with water infrastructure as far away as Memphis; Tennessee; and Jackson, Miss.

So rail transit has returned to Texas, but the giant cleanup is just beginning. Last week was one that few Texans, including their elected officials, will forget anytime soon. Addressing the week generally, Trinity Metro spokesperson Laura Hanna told Railway Age: “We are are delighted to see the sun come out and the power come back on.” It seems to be a safe bet that many Texans feel that way. It probably goes without saying that, if they live in the cities, they are glad to have their transit back, too.

Thermometers in the Lone Star State have registered some of the lowest readings in decades, flirting with the zero-Fahrenheit mark as far south as Dallas. In many places, including cities with rail transit, temperatures have remained below freezing since Feb. 14, and were not expected to pop above it for at least a week. Under the weight of the weather, most of the rail transit in the state shut down. Major problems with the state’s electrical grid in light of record demand for power exacerbated the situation.

The most comprehensive rail network in Texas is in the Dallas-Fort Worth Metroplex, extending north to Denton. Dallas Area Rapid Transit (DART) suspended all rail operations on Feb. 14 at 9:00 pm, along with the McKinney (M-Line) and Oak Cliffs streetcars; only light rail service is now up and running (on a Saturday schedule). Further north, the A Train to Denton was suspended through Feb. 20. Trinity Railway Express (TRE) trains between Dallas and Fort Worth were suspended, but are back and operating on a Saturday schedule. Fort Worth’s TEXRail was suspended on Feb. 15, but it is now operating on a modified schedule, Feb. 19-21.

Houston Metro’s light rail also stopped running, but a combination of rail and bus shuttle service is now operating on the Red, Purple and Green lines. Austin’s Capital Metro Red Line was suspended as well, but is scheduled to resume Feb. 22. Sun Rail’s El Paso streetcar has not run since last March, due to the COVID-19 virus.

The situation is better elsewhere in the region, where service is still running. The Oklahoma City Streetcar has also been suspended, replaced with limited bus service. The Kansas City Streetcar is running.

Bi-State Transit in St. Louis reports that its MetroLink light rail services are doing relatively well, too. The Red Line is running all the way, and the Blue Line is operating from Forest Park (where it connects with the Red Line) to Shrewsbury (the western part of the line). That means all stops have service, but it is reduced in downtown St. Louis and East St. Louis, compared with regular schedules. The Metro Streetcar in Little Rock, Ark., has been suspended since last spring, due to the COVID-19 virus.

There is also good news from New Orleans. The streetcars never suspended service, running on normal schedules. It was also cold in the Crescent City, with temperatures falling below freezing for the first time in several years. Mardi Gras was a “virtual” event this year, and much of the city was shut down to discourage visitors from coming and creating a coronavirus “super spreader.” Local advocate Alan S. Drake said it was good that the cold helped keep them away.