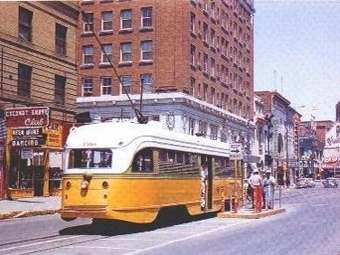 El Paso, Tex., may become the next U.S. city to turn to restored President's Conference Committee (PCC) cars in an effort to restore streetcar service.

El Paso has issued a request for proposals (RFP) to rehabilitate seven PCC cars it has on hand, currently stored on an airport runway. An option to rebuild two additional PCC cars is also being offered.

Plans in the RFP, reported to be more than 400 pages, call for modifications to meet Americans with Disabilities Act (ADA) requirements, such as wheelchair lifts or ramps, most likely at the center doors.

El Paso would thus join San Francisco, boasting a substantial number of PCC cars, and San Diego, with one in operation and another on the way, in operating restored PCC cars in revenue service within the U.S.