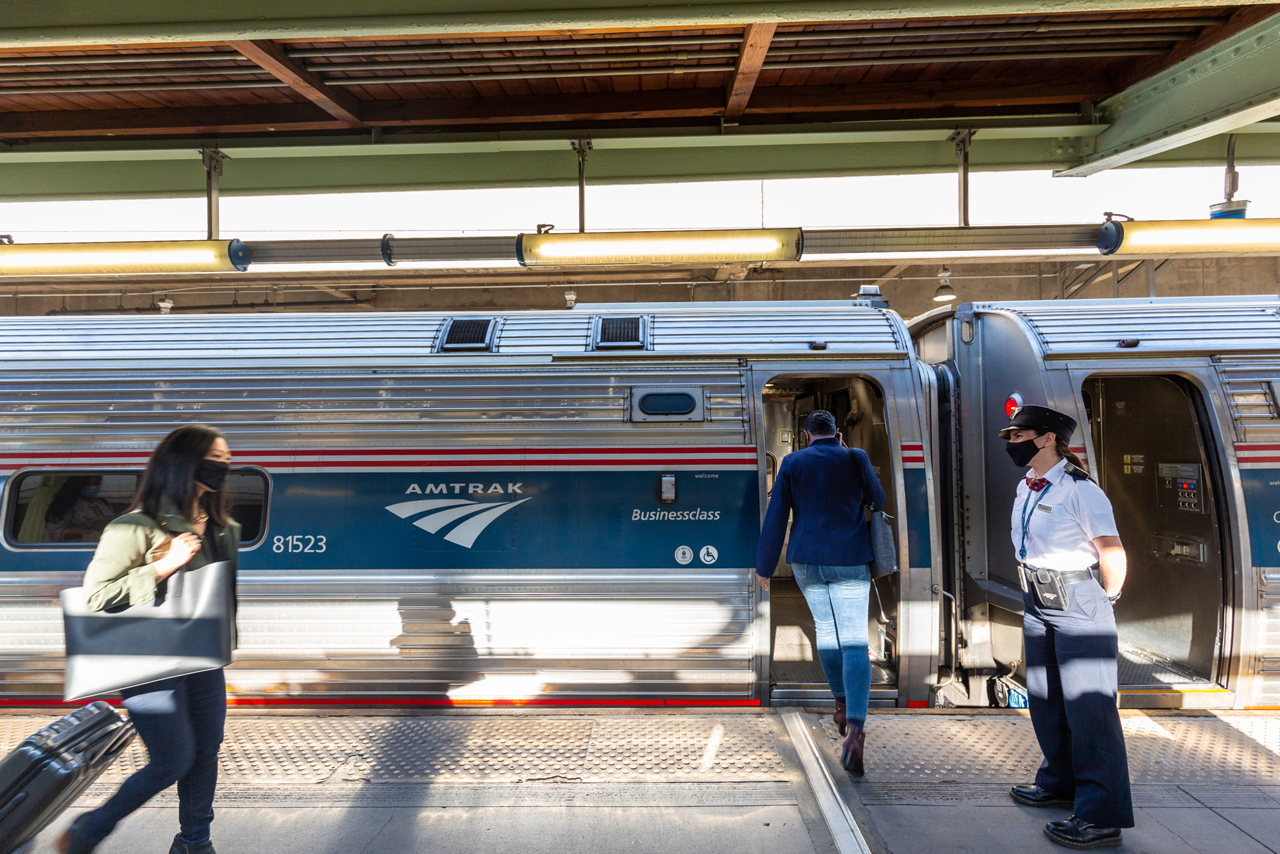 Service remains a mixed bag on Amtrak’s state-supported trains and corridors, and the Northeast Corridor (NEC) and its branches.

Since COVID-19 disrupted much of the world in March, Railway Age has followed developments, documenting transit’s decline in the spring and its slow recovery in October. Recent reports from Boston, New York, Philadelphia and Washington, D.C., indicate that the slow recovery may soon wither and become a transit holocaust. What about intercity rail service?

Amtrak’s long-distance network is now operating only three times per week. Service on Amtrak’s two other business lines—the state-supported trains and corridors, and the Northeast Corridor (NEC) and its branches—is a mixed bag as winter comes and the coronavirus continues. (Railway Age reported on Amtrak’s release of FY 2020 data, including ridership, late last month. )

Last spring, Railway Age reported that while Amtrak was still running most of its long-distance trains every day, there were severe service cuts on shorter routes. The extra-fare Acela trains on the NEC were eliminated during the spring, and returned on a limited basis during the summer. Other routes on the NEC and its branches lost some service. Empire Service in New York state was cut to two daily trips between New York and Niagara Falls, along with the Lake Shore Limited. Midwest Corridor trains based in Chicago were reduced to service levels that existed before 2006. There were other cuts in California and on the Cascades Corridor in Washington state, among other places.

Getting a baseline for comparing today’s schedules to past schedules is not straightforward. Amtrak does not publish schedules on its website now, except for the triweekly long-distance trains. For other lines, there is only a generic notice dated Dec. 3. No schedules are available on the website for any state-supported trains or corridors, or the NEC or its branches. Instead, it is necessary to use the “trip-planning” function. To get the number of corridor trains, it is also necessary to eliminate any long-distance trains that happen to allow passengers to ride within a corridor.

So it was necessary to consult Amtrak’s last-printed system timetable, effective Jan. 11, 2016. Now a collector’s item, it provides a historic baseline schedule. Five years ago, schedules were stable, so they provide a good baseline for comparison with today’s COVID-influenced schedules—now with fewer trains than before.

What Does the Research Show?

As of early December, the NEC and its branches are recovering, and some other corridors—notably the Downeaster between Boston, Mass., and Brunswick, Maine—are doing well, at least schedule-wise. California’s corridors are coming back, but other corridors are still running on severely reduced schedules. Some other state-supported trains are operating, but others remain suspended, and there are no trains to Canada. As for single-train routes, only some are running. Here is a breakdown.

Looking at the NEC, and not counting long-distance trains, there were 17 weekday trains in each direction between Washington, D.C., and Boston, which were divided about equally between Acela and conventional regional trains. There were a few more that only ran south of New York, especially at the beginning and end of the service day, and there were a few less Acela trains on weekends. It was a relatively robust schedule that was augmented by a few long-distance trains running south past the nation’s capital and other trains on the Keystone Corridor between New York and Philadelphia.

Today, there are ten weekday trains on the main spine: seven conventional and three Acela. There are six additional trains, including one Acela train south of New York (not counting long-distance trains that allow passengers to ride locally on the NEC portion of the route). On weekends, there are six conventional and four Acela trains from Boston south; and ten conventional and four Acela trains south of New York on Saturdays, and eleven conventional and five Acela trains on that part of the line on Sundays. The NEC is approaching its old level of service, although the trains are not as full as they were before the virus hit. One train that has returned to service and which fills out the service day is the Night Owl (still the unofficial name), which runs through the night and has a layover in New York around 2 a.m. or 3 a.m., depending on the direction.

Service is weak south to Virginia, but it was in the past, too. There are five trains to Richmond, plus a train to Florida that runs on different schedules depending on the day.  Two of those trains continue to Newport News and one continues to Norfolk, as on the prior schedule. The train to Roanoke runs via Charlottesville and Lynchburg, not via Richmond.

On Amtrak’s Hartford Line between New Haven, Conn., and Springfield, Mass., there used to be five trains on weekdays and seven on weekends. Today, there are five on Monday through Saturday and four on Sundays. One is a through-train from New York, and another is a Valley Flyer that goes further north to Greenfield, Mass. Service has improved over the years, though, because the Hartford Line trains are operated by the Connecticut Department of Transportation (ConnDOT). While running time or connections at New Haven may vary, service on that part of the system has effectively recovered.

Further north, the situation, for the most part, is not good. Because of government restrictions, there are still no trains between this country and Canada. The Cascades Corridor trains that previously went from Seattle, Wash., to Vancouver are not running; communities north of Seattle have no trains, although most have some local bus service that ultimately has connections to Seattle. The Adirondack, which went from New York to Montreal, no longer runs, and communities in the Adirondack region no longer have their former train. The same holds for Vermont, where the Vermonter and the Ethan Allen Express were discontinued by order of Vermont authorities. The earliest they can return to the rails is next spring.  The New York state portion of the former Maple Leaf, named because it went to Toronto, came back for awhile, but it did not go into Canada.  (While this writer rode that train on Oct. 29 and it was well patronized, it no longer appears as an option on Amtrak’s reservation system.)

The one exception to the grim picture is the Downeaster corridor between Boston and Maine. The previous schedule called for five daily trains, running on different schedules on weekdays and weekends. Service was shut down at one time, came back as a single train, and now boasts four daily trains in each direction.

Service in Pennsylvania has recovered, too. The Pennsylvanian between New York and Pittsburgh, Pa., has returned. On the Keystone Corridor between Philadelphia and Harrisburg, Pa., with some trains going to or from New York, there are 13 other trains in each direction on weekdays and seven on weekends.

The Carolinian between New York and Charlotte, N.C., via Richmond, Va., and Raleigh, N.C., is running. Because it is considered a state-supported train and not a long-distance train, it still runs every day. Until the virus hit, there were three Piedmont frequencies between Charlotte and Raleigh. Only one has returned.

Some corridors in the Midwest have service at historically low levels. The single daily trains between Chicago and Grand Rapids and Port Huron, Mich., are running, but there is only one daily round trip between the Windy City and Detroit, Mich. There have never been so few trains along that line. Service in Illinois has also been slashed. There is only one daily train between Chicago and Quincy as well as between Chicago and Carbondale, and two between Chicago and St. Louis, Mo. The City of New Orleans provides extra service to Carbondale three times per week, while the Texas Eagle provides an additional St. Louis train three times per week. Otherwise, there are only two round trips between that city and Chicago. In 2006, Illinois added a round trip to the Quincy and Carbondale routes, and two to the St. Louis route. That additional service is gone.

Historically, there were two round trips between St. Louis and Kansas City, Mo., but there is now only one. There used to be seven round trips between Chicago and Milwaukee, Wis., with six on Sundays. Today, there are four on weekdays and three on weekends.

Oklahoma’s Heartland Flyer between Oklahoma City and Fort Worth, Texas, still runs every day, but a connection at Fort Worth to the Texas Eagle is only available three times per week. It is still possible to get to Dallas on Trinity Railway Express (TRE) (except Sundays), and on local transit with a change at the airport and a long ride on Sundays.

There are no state-supported trains between Texas and the West Coast, which also means no daily trains through much of the West. In the Northwest, the Cascades Corridor has lost much of its former service. There are no trains north of Seattle, as noted. There were four daily round trips between Portland, Ore., and Seattle before the virus hit, but there is only one today. The same holds between Portland and Eugene, Ore., where there were three round trips previously. The Coast Starlight provides an extra frequency three days per week, and there are some buses between Portland and Eugene.

California’s corridors have been among the strongest in the country throughout much of Amtrak’s history. How are they doing? In 2016, the Capital Corridor between Sacramento and the Bay Area was served by 15 weekday trains and 12 trains in each direction that ran to Emeryville in the East Bay, with a bus connection to San Francisco. Seven of those trains continued daily to San José. Today, there are only eight on weekdays, five on Saturdays and six on Sundays, with the last departure from Sacramento shortly before 6 p.m. On weekdays, five of those eight trains continue to San José, and all of them continue there on weekends. In short, service is recovering slowly.

Before the virus hit, there were seven daily trains on the San Joaquin line between Stockton and Bakersfield, with connecting buses to Los Angeles. North of Stockton, five trains went to Emeryville, while the other two went to Sacramento. There are still four trains between Emeryville and Bakersfield; a level of service that has been provided for many years. The Sacramento trains, one of which connected with the Coast Starlight in each direction, are gone; one was replaced by a connecting bus, and the other by a long trip through Martinez and a bus connection there.

The Pacific Surf Line—which combined the historic Santa Fe line south of Los Angeles to San Diego and the historic Southern Pacific line north to Santa Barbara and San Luis Obispo—had developed a strong following and added frequencies over the years. Five years ago, there were 11 daily trains on the San Diego side (with some local Metrolink and Coaster commuter rail trains), and five going north to Santa Barbara—not including the Coast Starlight. Two of those trains continued to San Luis Obispo. Today, there are only six trains south to San Diego, while four weekday trains and three weekend trains go to Santa Barbara. One train per day continues to San Luis Obispo. There is also a bus on an overnight schedule; it ran pre-COVID, too. 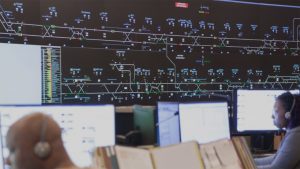 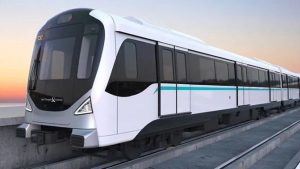 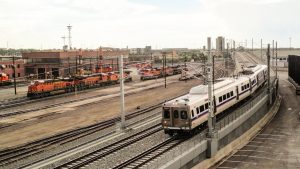