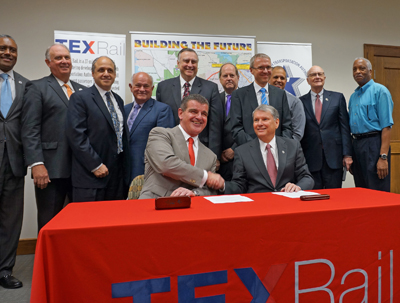 The Fort Worth Transportation Authority (The T) on June 9, 2015 signed a $106.7 million contract with Stadler Bussnang AG (Stadler) for eight four-car articulated GTW DMUs for the TEX Rail commuter line in a ceremony at The T’s Intermodal Transportation Center.

The contract includes component supply for 10 years plus an option for up to 24 additional DMUs. Final assembly will take place in Texas with a site at nearby Lewisville under consideration. The 27-mile, 10-station line from Fort Worth’s city center to Grapevine and Dallas Fort Worth International Airport Terminal B is due to open in late-2018 and is initially forecast to carry around 10,000 passengers per day, increasing to 14,500 by 2035. On June 2 the Federal Transit Administration gave Fort Worth Transportation Authority the go-ahead to take the $1 billion project to the engineering phase, which included authorization to order rolling stock. Spokeswoman Joan Hunter said The T began the procurement process for DMU vehicles in 2014 due to the three-year lead time for developing specifications, production, delivery and operations training for staff.

Fort Worth Transportation Authority Chairman Scott Mahaffey and CEO Paul Ballard, and Stadler President, Chairman and Group CEO Peter Spuhler participated in the signing ceremony. “It is fitting that this milestone contract signing for TEX Rail vehicles is taking place at the heart of our transportation system in downtown Fort Worth and will be one of the ten stations where these DMU vehicles will operate when TEX Rail service begins in 2018,” Ballard said. “In addition to serving as the central transfer center for The T’s bus service, the ITC is also base to the Trinity Railway Express commuter rail and Greyhound. The ITC is also our region’s center for Amtrak service with four trains a day. We are pleased that Stadler is working toward adding a railcar manufacturing facility in our region, where the TEX Rail vehicles will be among the first to be built as Stadler’s commitment to meet Buy America manufacturing requirements.”