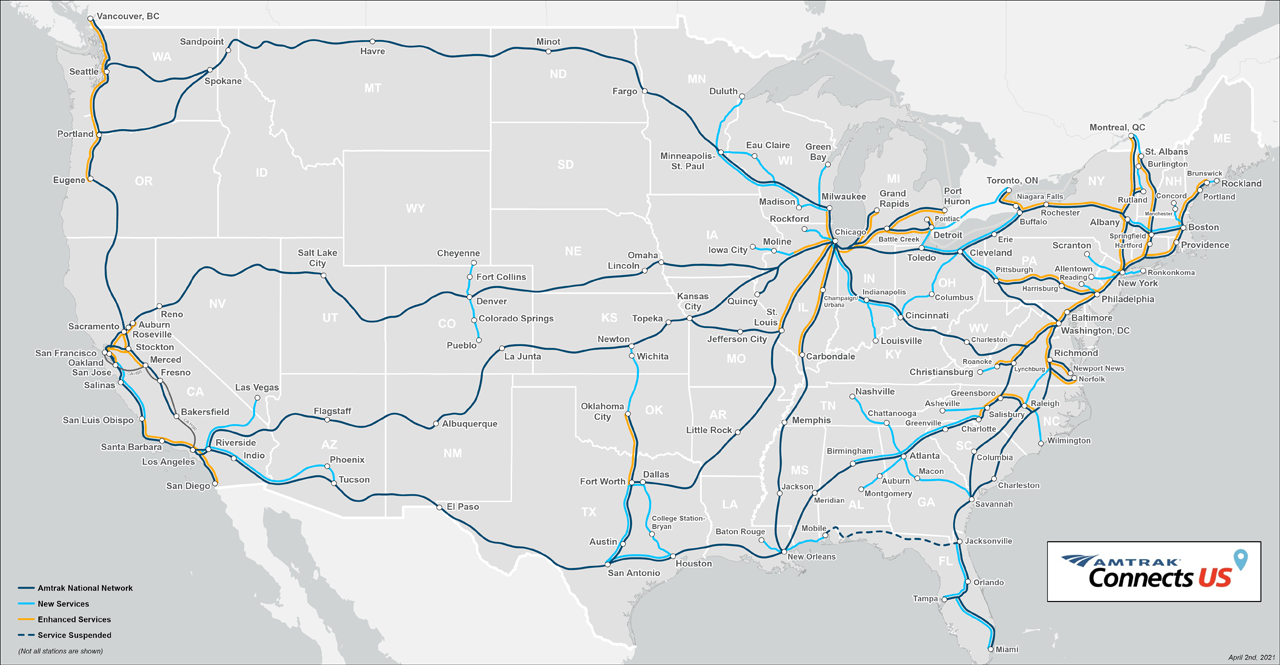 Amtrak 15-year vision calls for “improved service in major cities currently underserved by rail like Houston, Atlanta and Cincinnati, and new intercity passenger rail service to cities such as Las Vegas, Nashville, Columbus, Phoenix, and Wichita, with increased access for many towns and cities in between.”

Amtrak has released a report detailing its 15-year vision to improve 25 existing routes, add 39 new routes, and bring service to more than 160 new communities, which CEO William J. Flynn submitted to Congress, along with a letter calling on legislators to consider the railroad’s top priorities to support that vision.

Flynn provided Congress a preview of those priorities earlier this year.

It calls for “improved service in major cities currently underserved by rail like Houston, Atlanta and Cincinnati and new intercity passenger rail service to cities such as Las Vegas, Nashville, Columbus, Phoenix, and Wichita, with increased access for many towns and cities in between.” The plan also creates the potential to expand or improve rail service for 20 million additional riders annually, Amtrak says.

Amtrak provided a map of its corridor vision, which the report says “reflects coordination with state rail plans,” but it is not a “final proposal, and it does not lay out a specific order or prioritization for development, since many factors including available funding levels, post-pandemic travel demand, state interest, host railroad conditions, and equipment availability must be further and continually assessed in order to determine final implementation plans for this vision. In other words, if a corridor is not mentioned in this vision, that does not indicate that Amtrak opposes it; conversely, if a corridor is included, that does not indicate it is certain to be implemented. The corridors proposed here are intended to be additive to Amtrak’s pre-COVID-19 route network.” (For more, see Railway Age Contributing Editor David Peter Alan’s April opinion piece, “Amtrak 2035 Map: Hopes and Challenges.”)

“Under Amtrak’s vision, the complete set of corridors would be implemented over 15 years,” according to the report. “While high speed rail service may be right for certain corridors, current state-supported Amtrak services such as the Pacific Surfliner and the Hiawatha show that intercity passenger rail can be successful with conventional operating speeds. As corridors which begin at conventional speeds build ridership and demand, they can be considered for future conversion to high speed service.”

From Vision to Implementation

As Congress develops surface transportation reauthorization legislation, ‘[w]e need policy changes and investments so Amtrak can better support mobility, access, and opportunity for more people, in more places across the country,” according to Amtrak’s Vision for Improving Transportation Across America report.

In that report, Amtrak proposes a federal investment of $75 billion over 15 years “to develop and expand intercity passenger rail corridors around the nation in collaboration with our existing and new state partners.” That would cover the estimated cost for stations, railcars, locomotives, and infrastructure.

“Amtrak proposes a combination of funding mechanisms, including direct federal funding to Amtrak for corridor development and operation, and discretionary grants available to states, Amtrak and others for corridor development,” the report explains. “This vision does not propose to replace existing grant programs. Rather, it would augment them with dedicated and reliable funding from an intercity passenger rail trust fund … or other source needed to execute on a long-term vision.”

In a May 26 letter to Congress (download below), Flynn highlights what it will take to achieve Amtrak’s vision, including funding:

1. Create a corridor development program. “Authorize a new program aimed at developing new passenger rail corridors and improving existing corridor routes through Amtrak’s National Network grant. Amtrak would use the federal funds to cover the initial costs of getting these corridor routes up and running before asking states to support them consistent with federal law.”

2. Provide dedicated, predictable funding. “Intercity passenger rail has been underfunded for decades as federal funding has prioritized highways and aviation despite the clear strengths offered by rail service in certain markets. Amtrak and our state, local, and host railroad partners needs increased funding levels and new, more predictable mechanisms, such as an Intercity Passenger Rail Trust Fund, like what virtually every other mode of transportation already enjoys, to fund annual grants and the Federal Railroad Administration’s discretionary grant programs. Support the Intercity Passenger Rail Trust Fund Act: S.899 and H.R.2769.”

3. Ensure preference enforcement. “Since 1973, freight railroads have been required by law to provide Amtrak with preference over freight. However, many freight railroads ignore the law because Amtrak is unable to enforce it, and as a result, people suffer. Amtrak must be able to enforce its existing right to preference so that passengers can arrive on time. Support the Rail Passenger Fairness Act: S.1500 and H.R.2937.”

4. Ensure host railroad access. “An essential condition of the deal that created Amtrak and relieved freight railroads of the obligation to provide passenger service was fair access to all rail lines for existing and additional Amtrak trains. Unfortunately, too often host railroads resist and stall any efforts to expand service. The law must be clarified to stop private interests from preventing the passenger rail growth that people and communities need.”

According to Amtrak, the economic benefit of its corridor vision is expected to reach $8 billion annually by 2035, with an additional $195 billion in economic activity generated by additional capital investment from 2021-35. More than 26,000 ongoing permanent jobs, plus 616,000 person-years of employment supported by capital investments during 2021-35 will be created or supported, the railroad says.

“Now is the time to invest in our country’s infrastructure and future,” Amtrak’s Flynn said in a statement. “New and improved rail service has the ability to change how our country moves and provides cleaner air, less traffic and a more connected country.