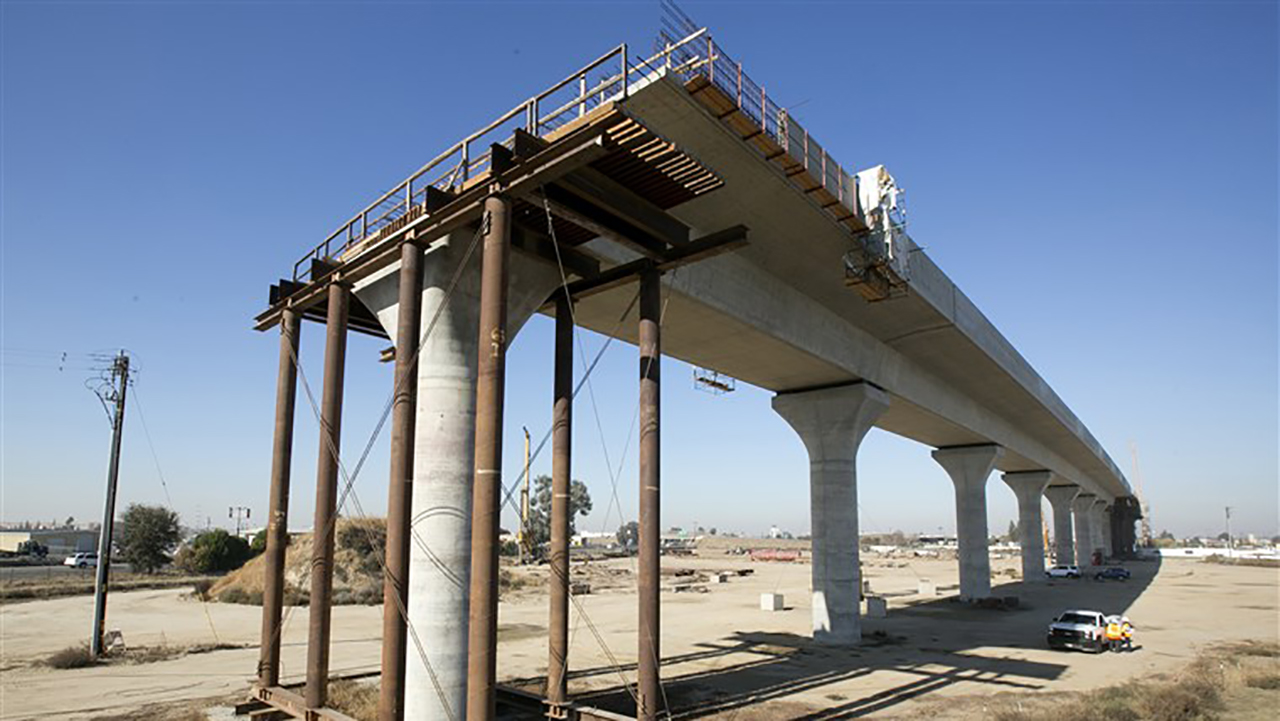 California Gov. Gavin Newsom, citing budget pressures, says the state will not move forward with plans to connect Los Angeles and San Francisco by high-speed rail. Rather, Newsom said the state will build only the 119-mile Central Valley segment of the line, linking Merced and Bakersfield. Newsom’s remarks, made during his first State of the State address Feb. 12, were not widely expected.

“I know that some critics are going to say, ‘Well, that’s a train to nowhere.’ But I think that’s wrong and I think that’s offensive,” Newsom told legislators, according to local media sources. “It’s about economic transformation. It’s about unlocking the enormous potential of the Valley.”

“Let’s level about the high-speed rail,” Newsom, a Democrat, said. “Let’s be real. The current project as planned would cost too much and, respectfully, take too long. Right now, there simply isn’t a path to get from Sacramento to San Diego, let alone from San Francisco to L.A. I wish there were.”

However, “Abandoning high-speed rail entirely means we will have wasted billions and billions of dollars with nothing but broken promises, partially filled commitments and lawsuits to show for it,” Newsom added. “And by the way, I am not interested in sending $3.5 billion in federal funding that was allocated to this project back to Donald Trump.”

Newsom’s decision comes less than three months after the state’s auditor issued a scathing report on costs associated with the project.

Brian Kelly, California High-Speed Rail Authority CEO, put a positive spin on the news. The governor “called for setting a priority on getting high-speed rail operating in the only region in which we have commenced construction—the Central Valley. We are eager to meet this challenge,” he said in a statement. “Importantly, he also reaffirmed our commitment to complete the environmental work statewide, to meet our ‘bookend’ investments in the Bay Area and Los Angeles, and to pursue additional federal and private funding for future project expansion. We welcome this direction and look forward to continuing the important work on this transformative project.”

Nonetheless, the news will come as a disappointment to the rail construction industry. Hundreds of millions of dollars worth of rail, crossties, signals, etc. were needed under the original plan.

In March of last year, the CHSRA announced that the L.A.-San Francisco line would cost $13 billion more and take four years longer to build than original estimates.

Caltrain Executive Director Jim Hartnett, whose agency is directly tied to the CHSRA project through a major effort of its own, also issued a response to Gov. Newsome: “Gov. Newsom pledged to refocus the State’s high-speed rail project on the Central Valley, and also reiterated the State’s obligation to maintain its commitment to help fund completion of the Caltrain Electrification Project. The State’s high-speed rail project is required to provide $713 million toward Caltrain’s $2 billion project to electrify the rail corridor and replace most of the commuter rail system’s aging diesel trains with a new electric fleet that will reduce travel times, improve train frequency, and increase system-wide capacity for a rail service that more than 65,000 daily riders depend on. The Caltrain Electrification Project is currently under construction and is scheduled to be complete in 2022. Last year, the State increased its commitment to the electrification of Caltrain service when it awarded an additional $165 million to support the purchase of additional electric trains. Caltrain is currently working to complete the Caltrain Business Plan, which is a long-term evaluation of how rail service should grow on the Caltrain corridor to accommodate ridership demand and address regional traffic congestion through 2040. The Business Plan will recommend a preferred service vision for the corridor and will identify the infrastructure investments needed to support increased service. It will also include strategies for funding these investments and the system’s ongoing operation and maintenance needs. The State is actively engaged in the efforts to complete the Business Plan.”

Texas Central, which describes itself as “an investor-led project developing the high-speed train between Houston and North Texas,” issued this statement from CEO and President Carlos Aguilar:

“We fully understand the complexities of the California high-speed rail project and the drivers that have led to the decision issued yesterday. It is important to contrast both the physical facts that make our project different, as well as the government vs. private approach to building such large-scale infrastructure.”

“RailPAC supports Governor Newsom’s action … After a decade it is clearly time for a change. Reprioritizing the high-speed rail project toward the completion of an operable segment (Merced to Bakersfield) with direct connections to Northern California’s other rail services, is a positive development bringing clear achievable goals to the project. This focus should advance the timeline for public operations and in doing so will bring improved rail service and transportation capacity to California travelers, especially those residing in the San Joaquin Valley.

“However, we are concerned that his comments seem to indicate that he would be satisfied with a segment within the San Joaquin Valley that would not connect to any of the four largest cities in the State. Such a route would have little prospect of covering its operating costs. We believe that the minimum system that would deliver significant transportation benefits would be San Francisco to Bakersfield.

“RailPAC also strongly supports, as part of the refocus, a process to initiate the connection between the San Joaquin Valley and Silicon Valley. The San Joaquin Valley needs the link to jobs and major international airports, and the Peninsula needs access to the workforce and the housing in the San Joaquin Valley. The Governor should put pressure on Silicon Valley business[es] to help finance the link, as well as the federal government. While we agree with the Governor that it will take time, that is all the more reason to start as soon as possible. This is especially true given California’s growing economy and projected 25% population increase in the next 30 years.

“RailPAC has always championed the careful stewardship of public transportation funds. As such, RailPAC applauds the Governor’s initiatives to dramatically improve the project’s oversight, transparency and governance. One issue that needs to be addressed, and one that affects housing projects as well, is the barrage of lawsuits that delay and drive costs for vital infrastructure initiatives.

“Meanwhile in the south, work should continue modernizing Los Angeles Union Station for both regional and intercity rail, and the elimination of bottlenecks on the main regional routes. RailPAC believes in the creation of robust regional passenger rail networks in both Northern and Southern California, linked by a new, efficient, high-speed route in incremental stages.”