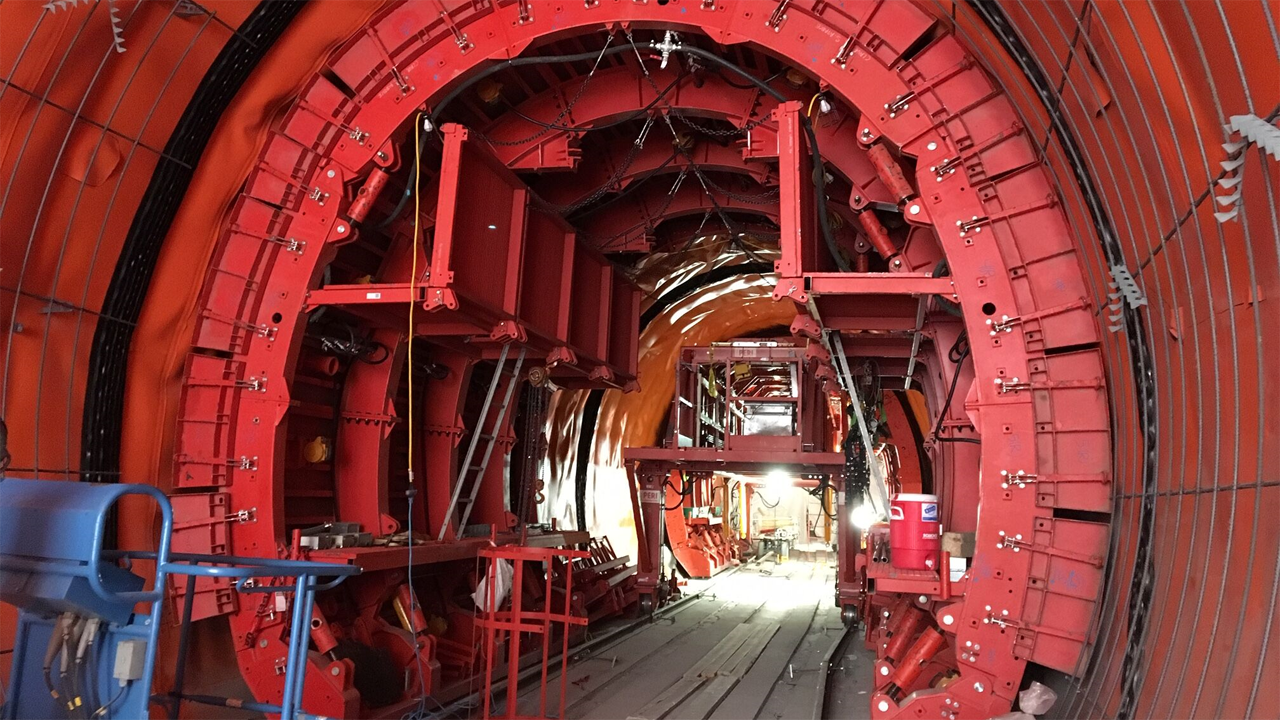 Construction on Edmonton, Alberta’s eight-mile Valley Line LRT line is moving along and is near the halfway point. Upon completion, it will give the Alberta capital 23 miles of LRT. The new line features 11 stations.

The project represents three “firsts” in Edmonton Transit Service’s LRT policy: the first low-floor route; street-level operation downtown; and utilization of the P3 public-private process. TransEd Partners, comprised of Bechtel, EllisDon, Bombardier and Fengate Capital Management, has responsibility not only for designing and building the line, but also operating and maintaining it for 30 years.

One of the benefits to Edmonton of the P3 methos is the ability to avoid a significant increase to its employee roster, with all of the related costs.

In construction terms, the new route will be the first to have concrete elevated sections, chiefly to cross busy roads, as well as an aerial station. Previous lines utilize grade crossings or underpasses. 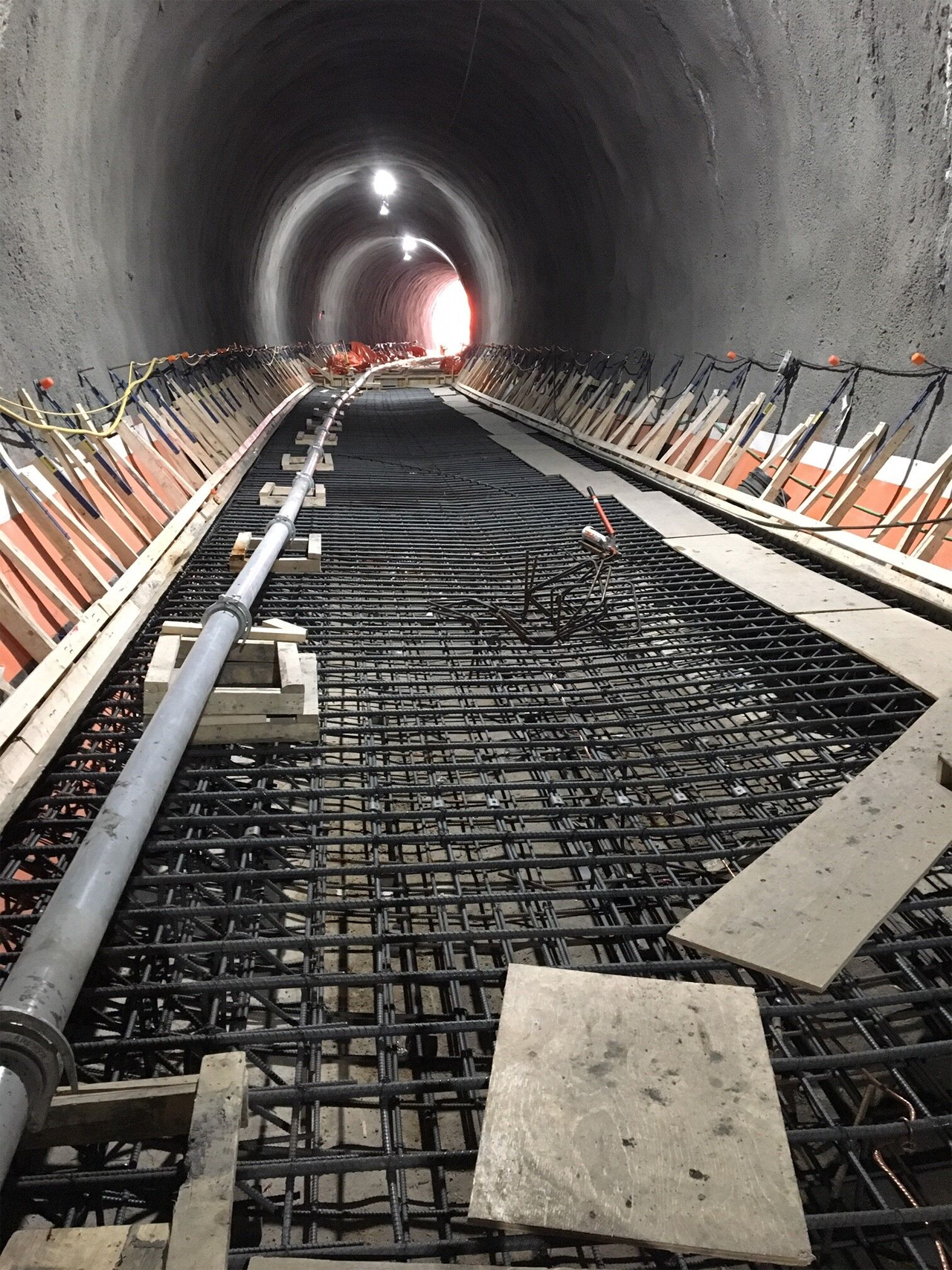 A view of one of the twin tunnels, lined with concrete, ready for the trackbed pouring.

One of the major challenges has been crossing of the North Saskatchewan River, across a deep valley. A new LRT bridge had to be built, due to the lack of a suitable road bridge. The structure features two towers on each bank, from which a balanced cantilevered deck is extended.

An Operations and Maintenance Facility has been constructed, and is ready to receive LRVs. Concrete ties are used in the yard, with wooden ones at several turnout locations.

Track is embedded in poured concrete at ground level locations; direct fixation is used for the tunnel, elevated and bridge sections. The route is a mixture of street running, side-of-the-road operation, and elevated trackage, with a short underground section downtown.

Track installation has begun, and a significant amount is scheduled for completion by the end of 2019. One thoroughfare, 95 Street, is being closed for eight months to speed up trackwork. 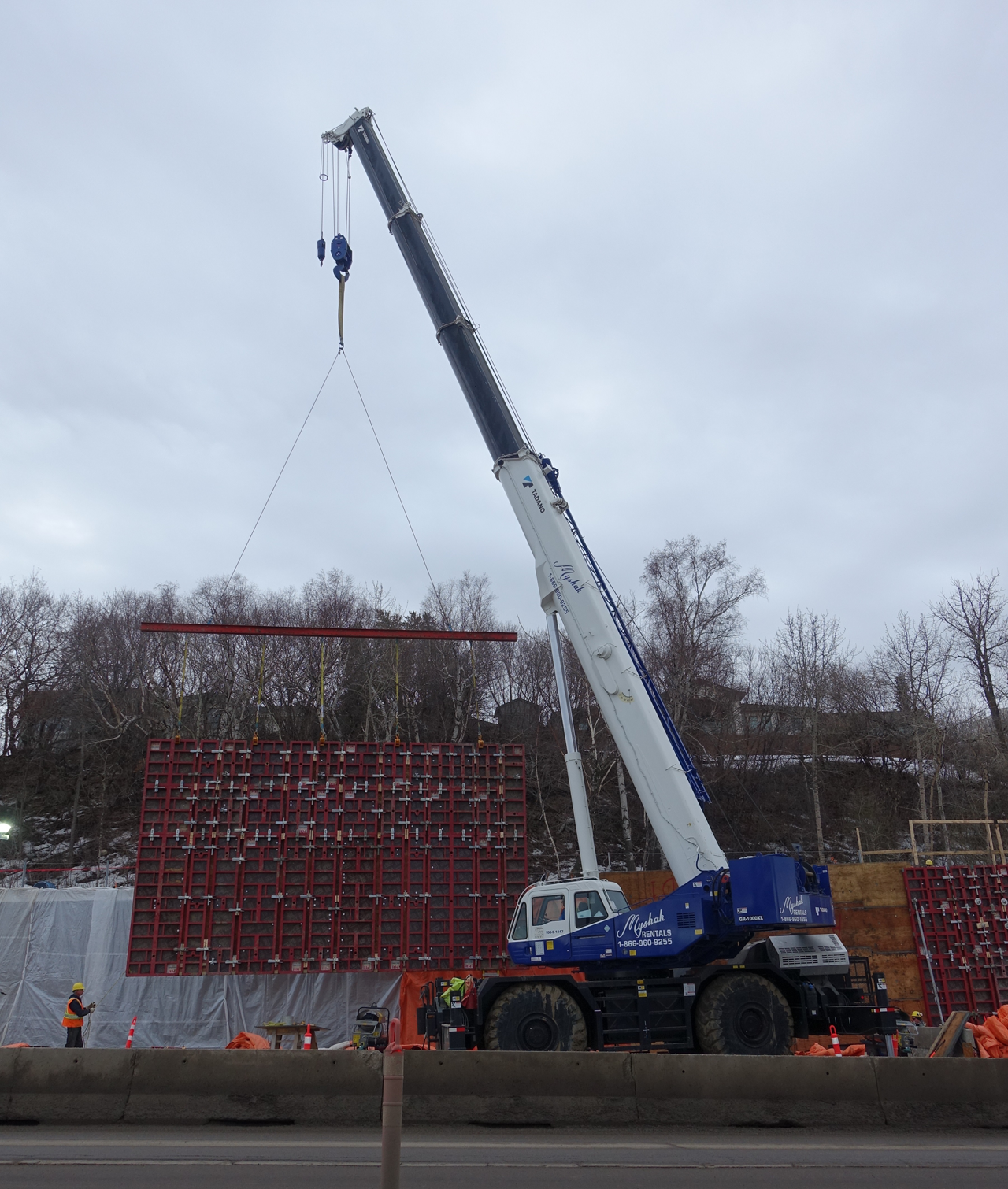 A reinforcing panel is lowered in place to protect the side-of-the-road alignment on Connors Hill.

TransEd has ordered 26 Bombardier Flexity seven-section cars, of which one arrived last year. They are being built at the Millhaven, Ontario plant, about 200 miles east of Toronto. Nine LRVs are expected in 2019, with the remaining 16 in 2020.

In common with similar construction projects, there have been unforeseen delays. One of these occurred during preliminary work involving the new bridge across the North Saskatchewan River. A huge, automobile-sized chunk of concrete was discovered on the river bed, at the site of one of the supporting piers. The offending concrete had to be broken up, a difficult and time-consuming process, to permit construction to proceed.

Another delay occurred when one of the spans of the LRT bridge across Whitemud Drive had to be replaced. It was discovered that the composition of the concrete was below standard, due to inadequate curing. As well, a sinkhole opened up on 95 Street, requiring correction.

TransEd has not confirmed if these delays will impact the scheduled December 2020 opening date. This will depend on whether the lost time can be made up. 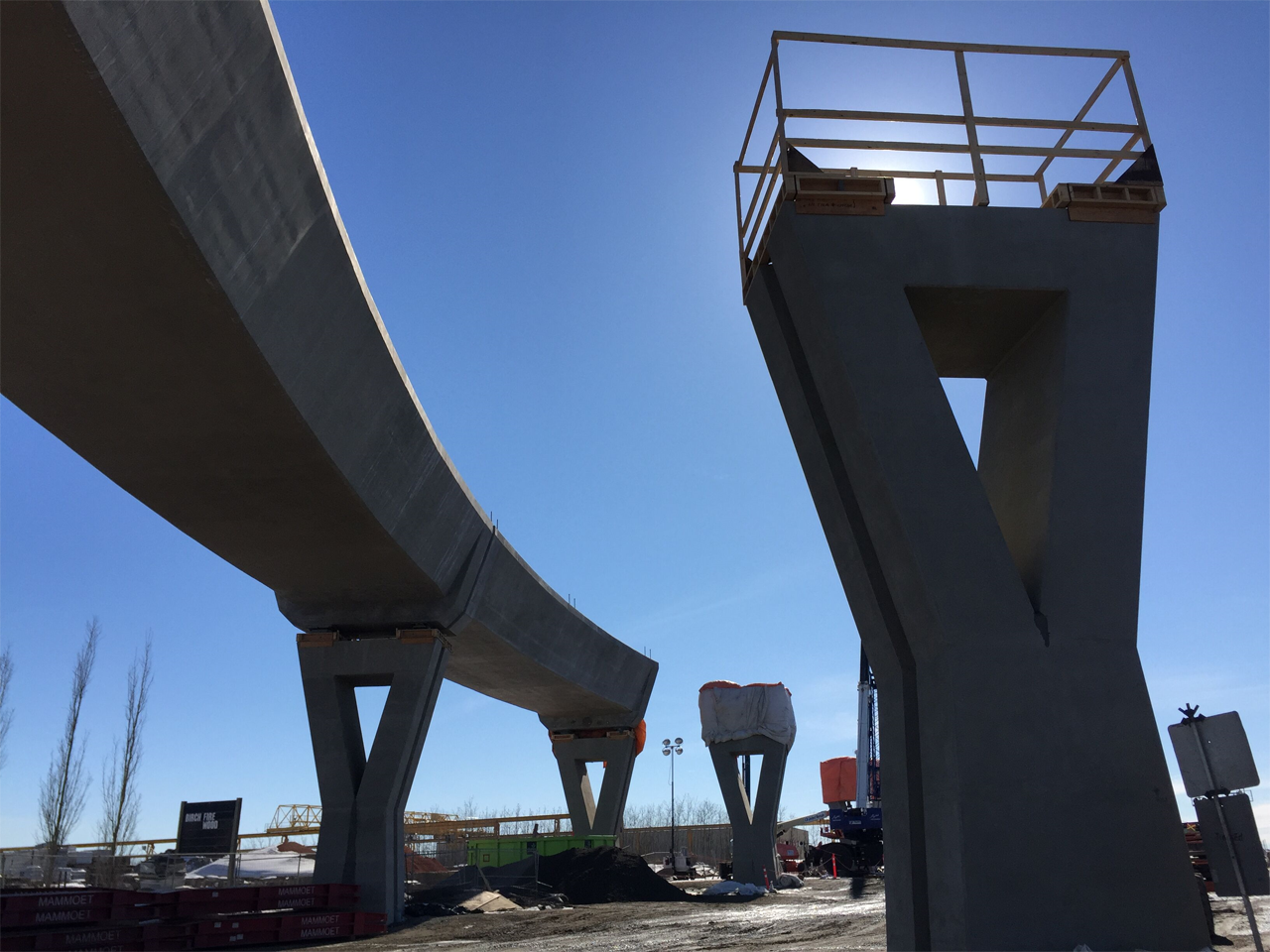 A section of the dual elevated guideway takes shape.

Nevertheless, the Valley Line, once the first revenue trains roll, will bring rail transit to a section of Edmonton previously unserved. The city’s LRT system holds the honor as the northernmost such operation in North America; the first section was opened in 1978, three years before San Diego’s.