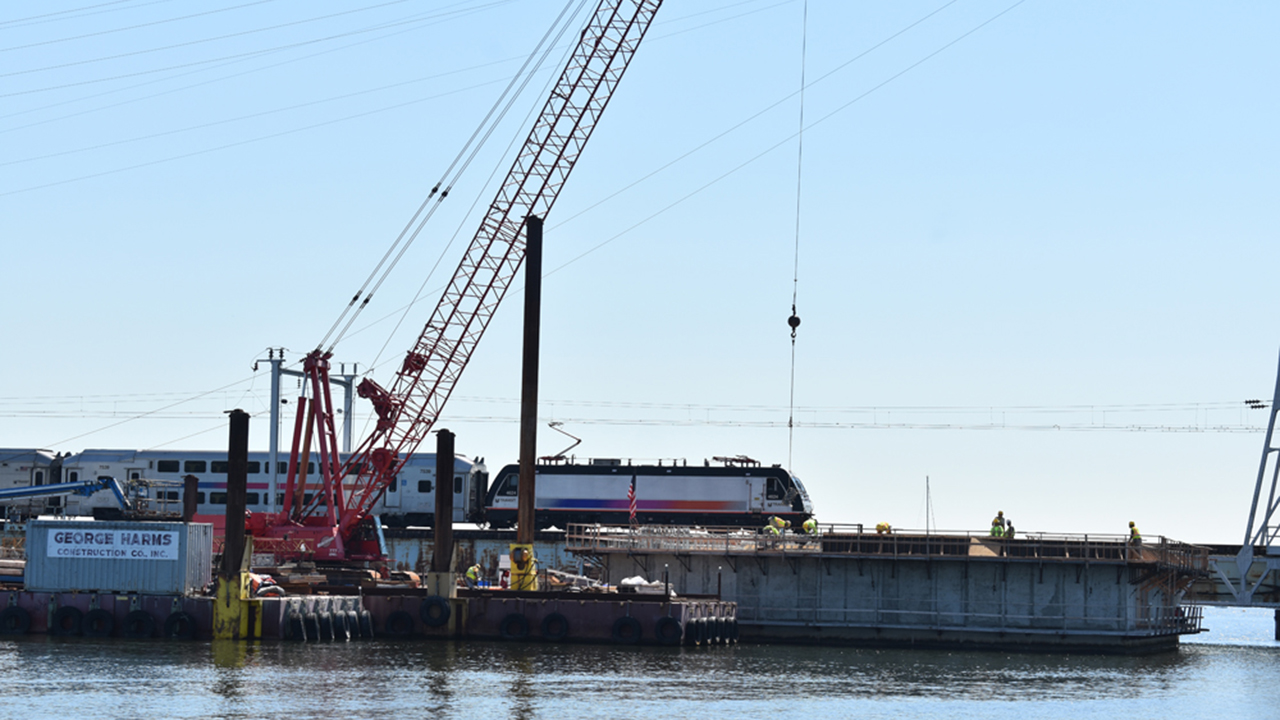 Portal North, the new Gateway Program fixed-span bridge on the Northeast Corridor (NEC) situated between New Jersey and New York that will replace 112-year-old moveable-span Portal Bridge, has been getting the bulk of public and political attention in recent years. But some 35 miles southwest, on the electrified portion of NJ Transit’s North Jersey Coast Line (NJCL), there’s another bridge replacement project of perhaps equal importance. This one is located on the Raritan River, between Perth Amboy and South Amboy, N.J.

Quietly proceeding, on schedule, is NJT’s Raritan River Bridge Replacement Project. The existing bridge, a 114-year-old, 2,931-foot-long (abutment to abutment) double-track structure with a swing span, was built in 1908. Known as River Draw, it suffered severe damage during Hurricane Sandy in 2012 when it was struck by a runaway tugboat, shifting it 18 inches on its pilings and requiring more than $3 million worth of emergency repairs before being placed back in service, albeit with speed restrictions.

The new bridge, estimated to enter service sometime in 2026, will be the third railroad bridge at this location. River Draw, which in 1908 cost $1 million, replaced a swing span built in 1875 for the New York & Long Branch Railroad, which was jointly operated by the Central Railroad of New Jersey and Pennsylvania Railroad. In 1936, the NY&LB became part of the PRR’s electrified territory in the Northeast when the PRR extended the catenary on its New York-Washington D.C. main line (today’s NEC) from Philadelphia to Washington. The wire terminated at South Amboy, prompting motive power changes there from electric locomotives to steam (through 1957) and then diesel, for service to Bay Head. (NJT extended NJCL electrification to Aberdeen-Matawan in 1982 and Long Branch in 1988.)

The 1875 bridge, an engineering marvel for its day, needed replacement after less than 50 years of service because train weights and speeds had increased significantly during that time period. The current 1908 structure has had no fewer than four owners: NY&LB (PRR and CNJ operations), Penn Central, the New Jersey DOT (PC and then Conrail operations), and, since 1983, NJT. This third iteration, which when completed is projected to cost well over $800 million, is designed to last at least as long as what it’s replacing, if not longer.

NJT developed four goals for this project, each with a set of objectives:

NJT considered five bridge replacement options, ultimately selecting a double-track, moveable-span vertical-lift design located to the west of the existing bridge. The alignment is about 10 degrees off-axis from the current bridge, with the center span perpendicular to the river’s navigation channel, providing improved vertical, horizontal and navigation channel geometry. Compared to the existing bridge, it is 10 feet higher, above a 100-year flood elevation, with 300 feet of clear navigation width to lessen the risk of vessel collision. Its mechanical and electrical systems are far less complex and thus more reliable and less maintenance-intensive than that of a swing span.

Raritan River Bridge Replacement is a three-phase project. NJT in May 2020 awarded a $248 million contract to George Harms Construction Co. of Farmingdale, N.J. for Phase 1, “GC.01.” Work, expected to be completed in October 2024, includes landside and bridge approaches and substructure. Phase 2, GC.02 (currently in procurement), will include construction of the vertical lift bridge (lift/flanking span superstructure), and communications, signal and overhead catenary work. Phase 3, GC.03, includes demolition of the existing bridge.

The total cost for all three project phases is estimated at $880 million, of which $446 million is financed by a Federal Transit Administration Emergency Relief Program grant for resilience projects in response to Hurricane Sandy. NJT allocated $248 million, or 44%, of the FTA grant to finance 100% of GC.01. The project is also part of NJT’s five-year capital plan.

“The Raritan River Bridge replacement is a great step forward in ensuring our North Jersey Coast Line customers have robust and sustainable rail service that will better withstand the effects of extreme weather, while meeting the current and future transportation needs of our customers for many decades to come,” remarked NJ Transit President and CEO and Kevin Corbett, who hosted an Aug. 3 tour of the construction sight complete with a water cruise in a small George Harms personnel shuttle boat on the river.

Editor’s Note: As a former long-time NJCL commuter (permanently working from home since late 2019) and the last president of the long-defunct (1933-2012) Jersey Shore Commuter’s Club, which leased a private car from NJT and predecessors PRR and Penn Central, I traveled across the existing bridge more than 12,000 times over the course of more than 20 years. Those interested in exploring the history of River Draw and its 1875 predecessor beyond what I’ve presented above should check out Morgan-NJ.org. Another excellent source is “The Unique New York & Long Branch” by Don Wood, Tom Gallo and Joel Rosenbaum, available on Amazon. – William C. Vantuono