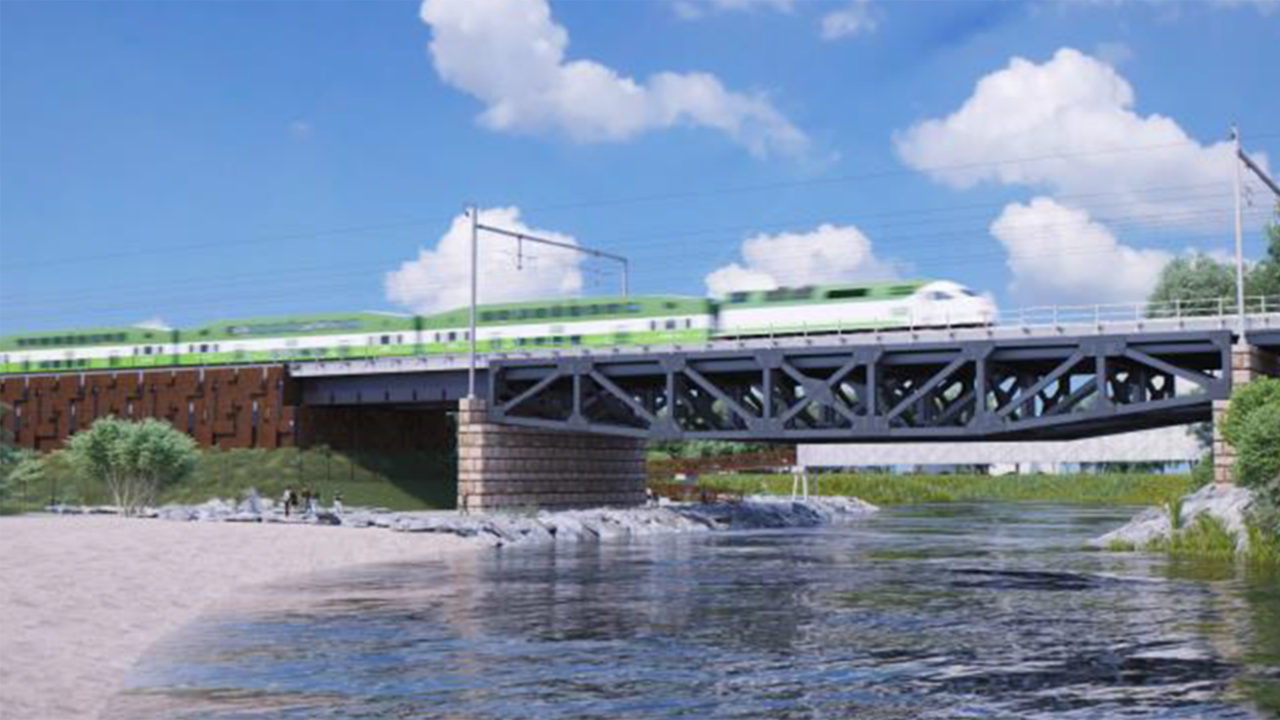 An electric powered GO train moves across a bridge, in this artist rendering. (Metrolinx image)

ONxpress Transportation Partners (ONTP) has been identified by Infrastructure Ontario and Metrolinx as the First Negotiations Proponent to design, build, operate and maintain GO Transit’s 25-year Rail Expansion Program in the Greater Toronto Area. The project would involve transforming much of GO’s network into a system that will ultimately offer bidirectional all-day service.

ONxpress is a consortium comprised of Aecon; FCC Construction S.A.; Deutsche Bahn (Germany) International Operations GmbH (DBIO); and Alstom, the railcar builder. Aecon holds a 50% interest in a joint venture with FCC, which will perform actual construction; and 25% in an operations and maintenance partnership with DBIO.

Identification of the First Negotiations Proponent is the first step in the negotiations process. Metrolinx and Infrastructure Ontario are negotiating with ONTP to confirm the technical and financial details of their bid. If a successful outcome is attained in the coming weeks, the next step will be the confirmation of Confirmation Close, when Metrolinx enters into a development phase with ONTP.

Metrolinx is a major Ontario Government agency, formed in 2006, with responsibility for the coordination and integration of all public transit modes in the Greater Toronto Area, and nearby Hamilton.

Infrastructure Ontario, another provincial agency, acts as a procurement and commercial leader for all major public infrastructure projects in the province.

GO Transit has, for some time, been contemplating electrification of several of its most heavily patronized routes, e.g., the Oshawa-Toronto-Hamilton Lakeshore route. Much of this trackage is now owned by Metrolinx, simplifying the process.

There is a fairly definite plan to extend GO trains eastward about 10 miles to Bowmanville, from the present terminus in West Oshawa. Rather than paralleling the CN line, trackage would cross Highway 401, then onto CP’s Toronto-Montreal main line, on new parallel trackage, to downtown Bowmanville.

Extension eastward from Hamilton’s West Harbour Station, over CN’s Grimsby Subdivision, is somewhat more advanced. It will be built incrementally: West Harbour-Centennial Parkway station (east Hamilton); thence, Grimsby, followed by St. Catherines. Service to Niagara Falls is the ultimate goal, but is complicated by the Welland Canal, traversed by a lift bridge, which would impact service. However, GO trains have been making the Toronto-Niagara Falls run on holiday weekends for about 10 years.

West of Toronto, there have been periodic requests for GO train service to the city of Cambridge, immediately south of Kitchener-Waterloo. This would be a 15-mile extension of the existing service to Milton, on CP’s Galt Subdivision. CP discontinued its last passenger train over this line in 1971. However, the considerable costs involved in implementing this service—track and signal improvements, stations and CP’s track rental costs—have combined to forestall this proposal.