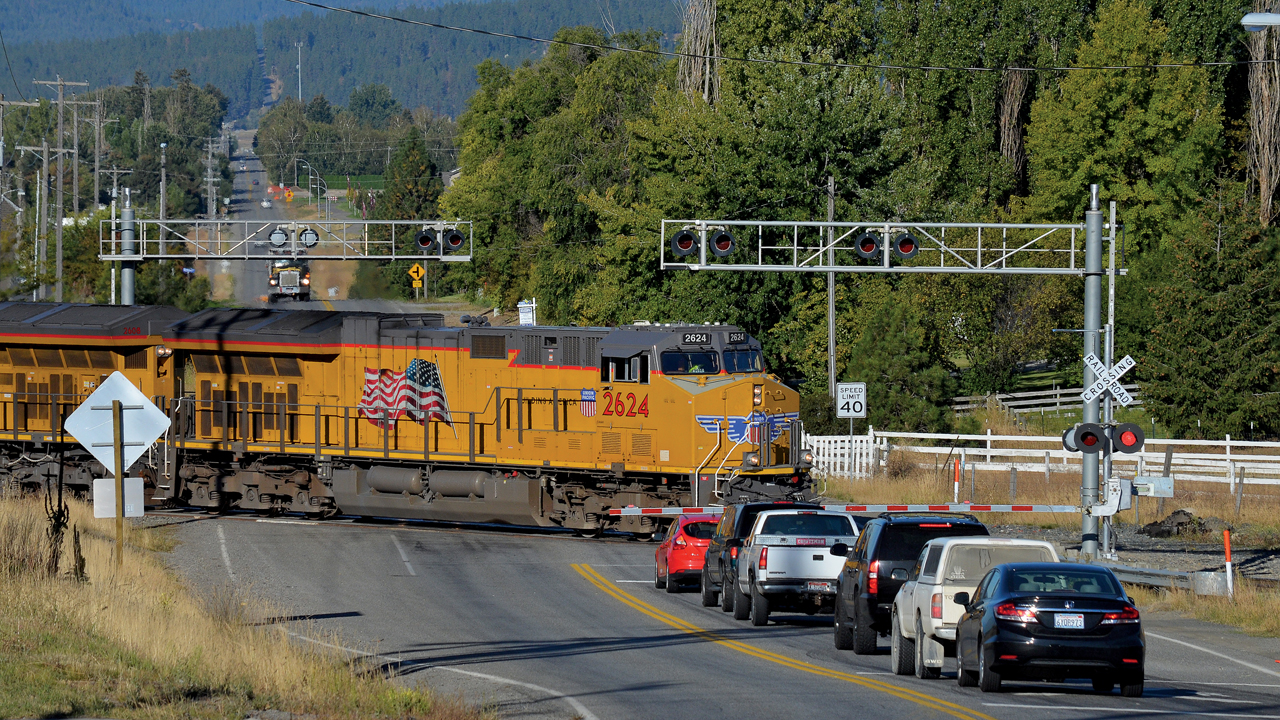 A UP train cross Prairie Ave. in Post Falls, Idaho. All photos by Bruce Kelly

Forty-five years of Gem State safety effort is reaffirmed by crew members and state troopers climbing aboard a pair of Union Pacific locomotives at Coeur d’Alene Junction, Idaho, on the morning of Sept. 13, 2017.

The day’s “Officer on a Train” agenda will be a bit like fishing in a barrel, traveling back and forth on less than four miles of track, through more than a half-dozen crossings, with descriptions of vehicles that ignore warnings lights, gates or stop signs being radioed to state, local and railroad police who are positioned nearby. There will be no accidents or arrests today, but plenty of written warnings handed out to drivers who placed themselves, and any passengers, within seconds of potential death or injury.

It was back in 1972 when UP and the Idaho State Highway Patrol launched a public education safety program presented to civic groups, schools, truckers and bus drivers. After its first year, the message of “Look, Listen and Live” (also phrased as “Stop, Look and Listen”) reduced Idaho grade crossing fatalities by 43%. Now known as Operation Lifesaver—with affiliations in all 50 states—that program, together with widespread improvements to crossing protection devices, has helped bring nationwide incidents down from in excess of 12,000 collisions in 1972 to fewer than 2,100 collisions in 2016.

There continues to be significant need for outreach to the general public regarding safety on or near railroad property, whether it’s motorists who encounter that property at grade crossings or pedestrians who walk near or across tracks. At the same time, there’s more that railroads themselves can do to make grade crossings safer, and to reduce their liability in cases like those where courts have decided the fault did not lie solely on the offending motorist. 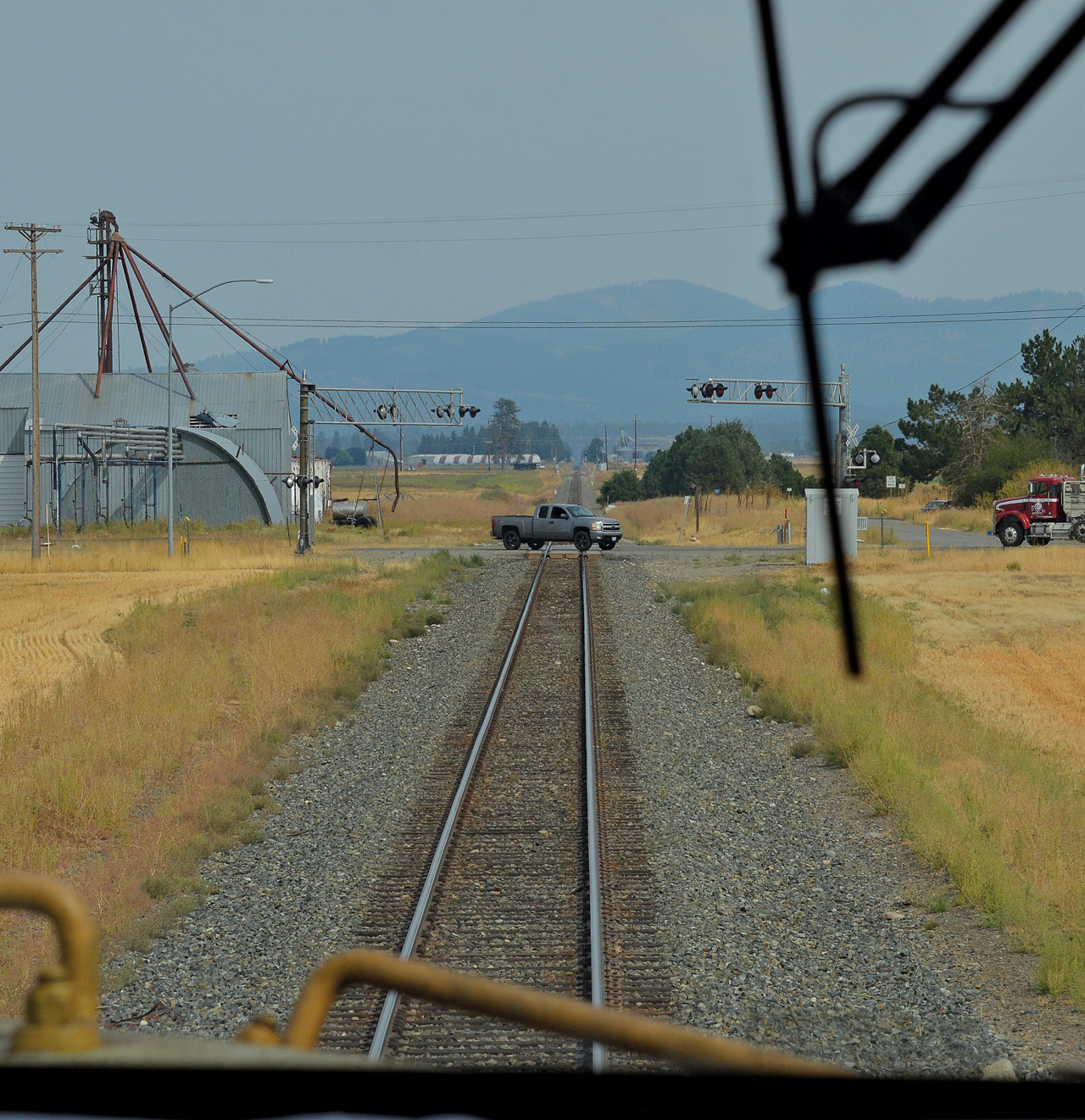 Travis Campbell, a UP engineer who serves as state coordinator for Idaho Operation Lifesaver, says the formula for reducing grade crossing accidents boils down to three basic elements: Education, Engineering and Enforcement (the Three Es). The Education part Campbell describes as “a program to provide rail safety emphasis and awareness through training, PSA [public service announcement] campaigns and special events. We speak to groups ranging from kindergarten to senior citizens with an emphasis on new drivers and commercial drivers.” 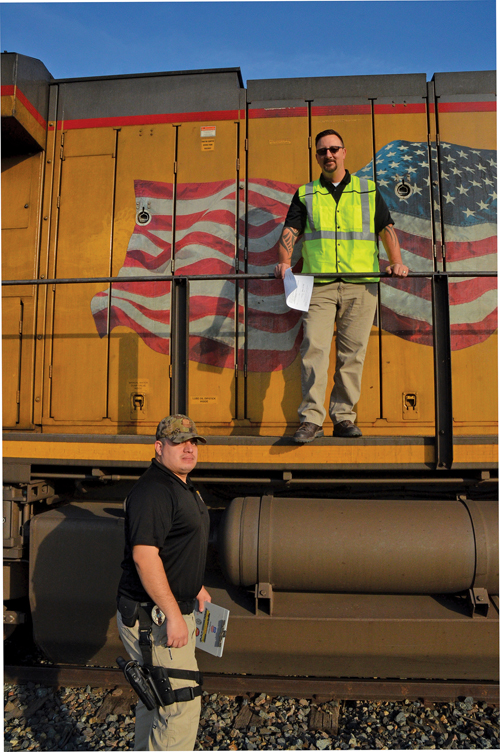 The Engineering element is where railroads partner with state government and industries to create safety solutions for roadway/rail intersections. Campbell says, “We support and encourage the kinds of continued engineering research and innovation responsible for having greatly improved the safety of America’s railroad crossings, because whenever two modes of transportation share the same section of roadway, as they do at highway-rail grade crossings, the possibility for a collision exists. Engineering technologies play a critical role in helping minimize and reduce those collision risks.”

Enforcement is part of what that September 2017 Officer on a Train operation was all about. It’s when railroads and local law agencies team up “to enforce traffic laws pertaining to highway/rail intersections, as well as trespassing.” Campbell adds that a program known as “Adopt-a-Crossing” gives law enforcement officers the opportunity to focus on one or more railroad crossings as part of their routine patrol.

While the presence of Operation Lifesaver is known to most in the rail industry, Campbell feels that some companies might not be taking full advantage of the benefits available through interaction with OL. He says, “Many Operation Lifesaver state programs have a large network of authorized volunteers and a network of strong community partners that can help you achieve your safety goals. Their partnership in a common goal can strengthen your public safety program.”

Whether it’s a failure of today’s driver education classes and state licensing agencies to adequately inform motorists of the meaning of a stop sign or “crossbuck” at railroad crossings, or the modern epidemic of drivers distracted by their own hand-held devices, anything short of gates and flashers seems to leave the door wide open for disaster. The X-shaped crossbuck, a familiar sight throughout rural and even industrial North America, and used in varying sizes and shapes around much of the world, is intended to enforce the same level of traffic control as a yield sign. But many people today, even those who live and work in rail-served communities or who commute to work daily by train, are somehow oblivious to the presence of tracks and trains the moment they sit behind a steering wheel.

So-called “passive” crossings, where no electronic warning devices are present, are statistically more dangerous than “active” crossings that have gates and/or flashers. According to a May 2017 report issued jointly by the U.S. DOT and the FRA, crossings protected only by stop signs or crossbucks have more than five times the accident rate crossings with gates, while crossings with no protection devices have 27 times the accident rate those with gates. Those rates were determined by a “per car and per train” analysis of the more than 211,000 crossings in the FRA database.

The actual number of accidents at any given crossing, or in any given state, may appear higher than the statistical rate due to the increased odds presented by higher traffic volume and distances traveled. This is why the 2017 DOT/FRA report says, “The state of Virginia had 42 accidents in 2014 while California had 128. However, the population of California drove more than four times as many miles as Virginians did in 2014, so Californians’ rate of accidents per mile driven was actually lower than the Virginians.” A 135-page report on driver behavior at grade crossings, released by the DOT and FRA in 2008, said, “Many drivers believe that active warning devices are used at all or most grade crossings, and thus, the absence of an active warning system could be interpreted as signaling the absence of a train.”

Enhancement of passive warning devices, making them more attention-getting to approaching motorists, has been an ongoing process. One of the earliest examples, which is still in use, is something called the “Ida-Shield,” also referred to as a “Conrail Shield” in some road sign catalogs. It’s an aluminum panel coated with highly-reflective chevron stripes (typically red and silver), attached to the main post supporting a stop sign or crossbuck. The left and right sides of the panel are bent backwards at a 45-degree angle so as to reflect the headlights of an approaching train toward the line of sight of approaching motorists.

A three-year study following the first installations of the Ida-Shield in Idaho in the mid-1990s found that the driver compliance rate at passive crossings increased from 44. % to 69.6%, and driver reaction rate (slowing down, turning heads to look for an approaching train) increased from 55.6% to 88.2%. Data gathered in 2008 showed driver compliance was 83% at crossings with both stop signs and Ida-Shields, vs. 52% at crossings with stop signs only. 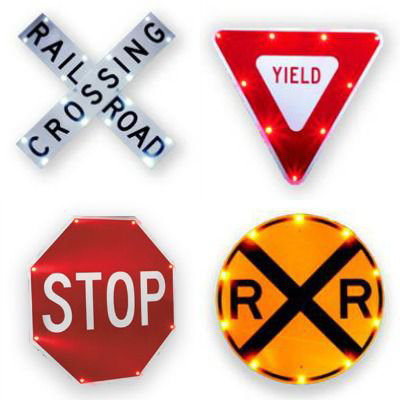 The latest products helping to improve driver compliance at passive crossings are electronically-enhanced signs such as the SignAlert product line from TraffiCalm Systems of Post Falls, Idaho, and E-Signs from CTC Inc. of Fort Worth, Tex. These include stop, yield, and other roadway signs (CTC Inc. also offers crossbucks) fitted with flashing, high-intensity LEDs along their edges. Optional solar power makes them relatively easy and inexpensive to install at even the most remote locations, and they can be configured to flash continuously or be triggered by motion sensor. Both TraffiCalm and CTC Inc. say their solar power systems provide up to two weeks of continuous service off a single charge, and batteries will continue to charge under most cloud-cover conditions.

Juries have been known to award tens and even hundreds of millions of dollars to families whose loved ones were killed in a grade crossing collision, even in cases where drivers have been intoxicated or otherwise distracted, and where the necessary crossing protection devices were present but ignored. When a court rules against the railroad, it’s often due to some perceived condition (real or imagined) such as impaired visibility or insufficient warning.

Passive crossings are statistically more likely to fall into this scenario, but gated crossings have too, particularly where the angle by which the roadway crosses a railroad is less than 90 degrees. The FRA’s May 2017 crossing accident analysis said, “A crossing angle of 29 degrees or less is more dangerous than crossing angles that are greater than 29 degrees.” Citing an accident-prone crossing in New Jersey as an example, the FRA said, “The angle of the intersection is far from perpendicular, which increases the distance between the gates and the tracks. This increases the likelihood that vehicles will become trapped while a train comes through.”

While the FRA admits that the effect of angles on grade crossing collisions “is difficult to quantify,” its opinion that sharply-angled crossings “make it nearly impossible for motorists to look down the tracks and visually identify an on-coming train” merits attention. A ten-mile stretch of UP’s Spokane Subdivision in Kootenai County, Idaho, (where that September 2017 Officer on a Train exercise was performed) is oriented from southwest to northeast, intersecting with more than a dozen roads running either north-south or east-west. Several of these crossings have angles as low as 35 degrees, which can hinder the view of trains approaching from a driver’s right side.

UP in recent years has been adding gates to these crossings, most of which had previously been passive and a few of which were previously equipped with flashers only. The area’s rapid population growth has boosted the statistical odds of a truck or automobile pulling in front of an oncoming train, especially when motorists today seem increasingly unaware that trains still operate in the 21st century, or that a stop or yield sign at a railroad crossing means the same thing it does at a roadway intersection.

One more thing the general public doesn’t understand is that it’s not up to a railroad, but state and local government (often with federal funding) to decide how and where grade crossing protection gets implemented. Maintenance and repair are typically performed by the railroad, which is reimbursed by the appropriate government agency.

UP says, “Each state is tasked to develop a system to determine a priority list for crossing safety improvements based on various factors. Once a state determines which crossings are to be upgraded, it contacts the railroad, which meets with state and local representatives to review the project.” Where states fail to uphold their responsibility to make roadways safe for their citizens, railroads may find it necessary to implement the Three Es, and lead the joint effort toward practical grade crossing solutions. 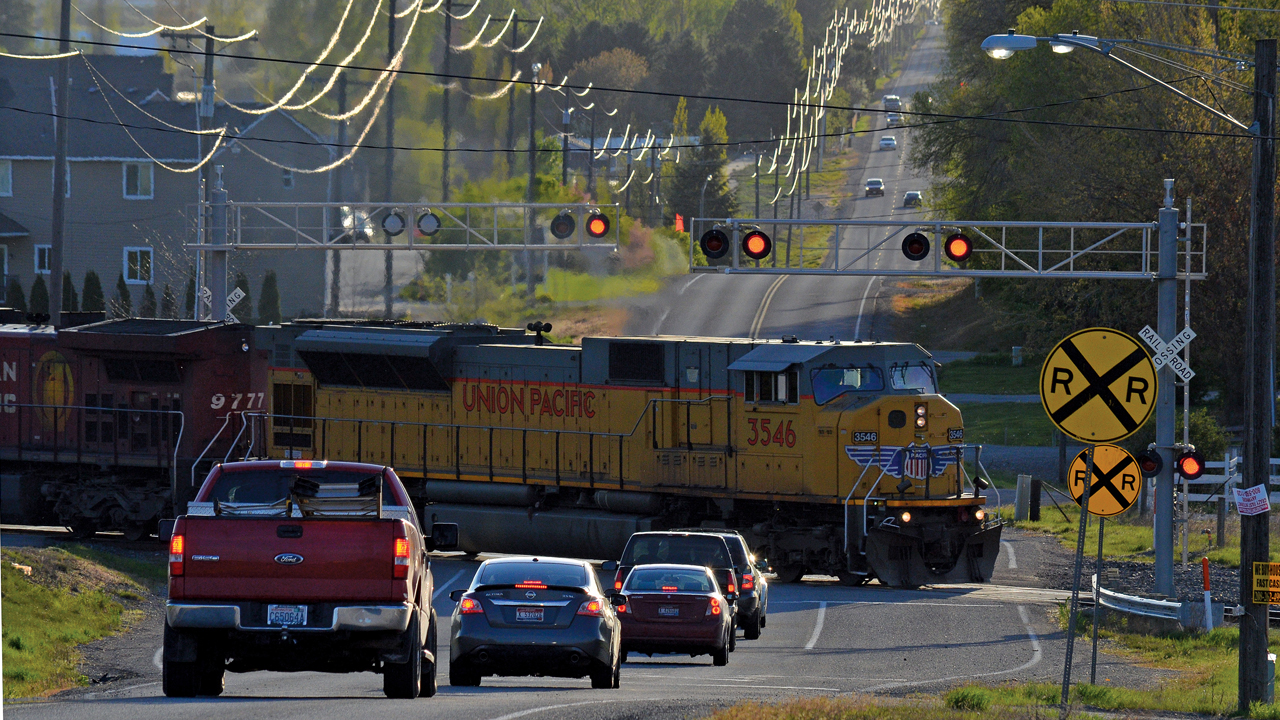