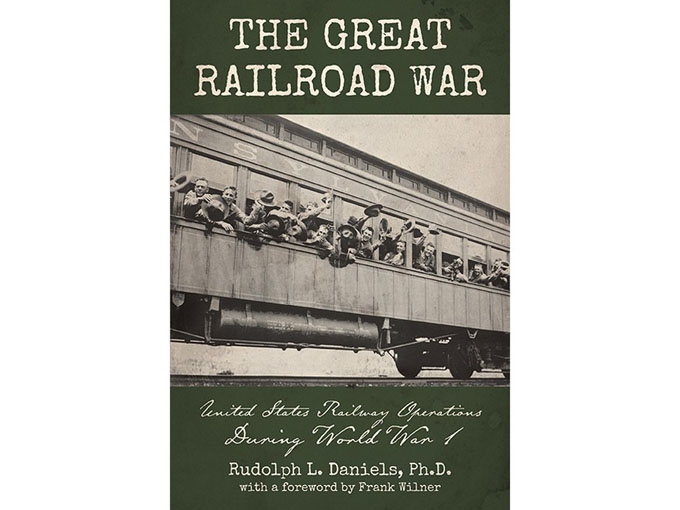 I came to “The Great Railroad War: United States Railway Operations During World War I”, Prof. Rudolph L. Daniels’ book on the history of American railroads during World War I from a different perspective.

Comes now Prof. Daniels, with – in the words of the late broadcaster Paul Harvey – “the rest of the story.” As he makes clear, government control came at the behest of the railroads themselves because they could not overcome all of the problems they faced in mobilizing for their wartime role. Shortly after war was declared, railroads established the Railroads War Board, which “had the task of guiding the managers of all the nation’s railroads in carrying out government requirements for the war effort.”

But they couldn’t keep up with the steep increases the war brought. Regulations hampered efficiency, leading to congestion and equipment shortages. Federal regulations prohibited one possible solution, pooling. So the War Board sought assurances from Attorney General Gregory Watt that he wouldn’t prosecute railroads if they engaged in the practice. Not so fast, said the AG. So long as the law remained on the books, he vowed to uphold it.

If everything is prioritized, then nothing really is, as was demonstrated by a placard system for moving priority freight that led to as much as 85% of freight in some regions receiving priority status. Coordination between train schedules and port shipping schedules was virtually non-existent. Freight cars became prime storage facilities.

Prof. Daniels traces the history of the new United States Railroad Administration through the end of the war and beyond. In fact, it remained in existence until 1926, long after the railroads were returned to their pre-war owners in 1920. Although it faced multiple challenges, and Professor Daniels shines considerable light on them, USRA’s accomplishments were many in contributing to the successful conclusion of the war effort.

But U.S. rail involvement in World War I went beyond just the challenge of moving hundreds of millions of tons of supplies and millions of soldiers domestically. U.S. railroaders also took their expertise overseas.

American railroaders were recruited to operate trains supplying the American Expeditionary Force in France. They applied American technology and operating practices along a French system that was at times ill-suited for those practices. But they succeeded admirably. As Daniels writes, “There is no doubt that the United States Army railroad soldiers met and accomplished their immense tasks which directly contributed to Allied victory.”

Even farther afield was their journey to Russia where Americans were involved in keeping railroads running in both the North of Russia and the Far East along the Trans-Siberian Railway. Ostensibly they were deployed to aid in the movement of battle-hardened Czech soldiers to the Western Front, a mission that was perhaps a cover for British schemes to thwart the Russian Revolution. The last American railroad forces didn’t leave until 1920, well after the 1918 armistice ended “the war to end all wars.”

The War ended rather abruptly, with no firm plans on when or how to restore the control of the railroads to their private owners. But no one, according to Daniels, “expected or wanted a return to the prewar railroad situation. All wanted government control to some degree.” He also details some of the financial issues that dogged this return to private ownership.

Daniels successfully explores how conflicting views on the way railroads should operate in the future led to passage of the Transportation Act of 1920. Daniels writes that the Act’s motivation was to “create a more unified system.” One way it attempted to do that was by giving the Interstate Commerce Commission more authority over railroads, covering everything from finances to new construction to freight car usage and movement. Of course, the system which emerged proved woefully inadequate in the years following World War II when new, subsidized competition and outdated regulations combined to bring the industry to its knees.

All of this is placed in an historical context that is necessary to fully understand some of the later developments in American railroading.

Tom White retired from the Association of American Railroads in 2009 after more than 40 years in public relations, most of that time with the AAR. While at the AAR he worked with the news media and wrote speeches, articles and testimony. Before succumbing to “the dark side,” he worked as a newspaper reporter and radio announcer. In retirement, he lives in the old railroad town of Brunswick, Md.