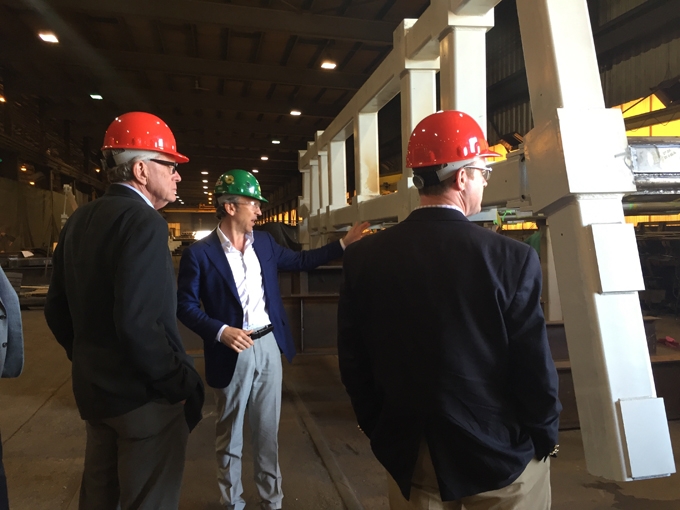 Owen gave an overview of PVS and its operations. PVS is a division of Owen Industries, a family owned steel fabrication and steel service company. PVS is one of the top industrial fabricators in the United States, producing a variety of quality structural steel products for projects around the world, including a number of bridges for the rail network.

Owen gave a tour of the facility, which includes both PVS’s Metal Service Center and Structural Fabrication facilities. The company’s steel fabrication and metal processing operations employs 130 people on the 30-acre site, which includes a 500,000-square-foot fabrication facility. The facility is serviced by freight rail, providing access for transportation of completed products to project locations throughout North America.

“Companies such as Paxton & Vierling Steel are proof that manufacturing remains an essential component of the American economy,” said Ashford. “Growing our economy and creating high-paying jobs are shared bipartisan goals for all members of Congress.”

Ashford was elected to serve Nebraska’s 2nd congressional district in 2014. He was one of only two democrats across the country to beat an incumbent House republican in 2014. Prior to being elected to the U.S. House of Representatives, Ashford served as a state senator. He serves on the House Armed Services Committee on the Emerging Threats and Capabilities, and Strategic Forces subcommittees. Ashford also serves on the Committee on Agriculture on the General Farm Commodities and Risk Management, and Nutrition subcommittees.