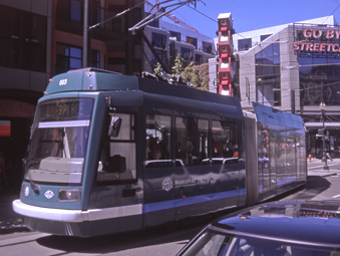 Just over eight years ago I cooked up a new concept in rail transit that I called Rapid Streetcar. Since then, it's been attracting a lot of interest within the public transportation industry (although a lot of would-be "experts" using it as a buzzword don't always get it quite right).

Problem was, North American planners only thought of streetcars as a slow, circulatory mode competing with pedestrians. Meanwhile, de facto high-performance streetcars were taking Europe by storm, and it was clear that streetcar technology could approach the service capabilities of “full” light rail transit (LRT) — in fact, streetcars could be deployed as a kind of “junior LRT”.

Another factor was the “gold-plating” disease—over-design—with each new LRT startup trying to “one-up” the last new start in another city. LRT railcars were getting bigger and beefier, and station designs were escalating from originally simple shelters into “palaces.”

This led me to recall the original inspiration of LRT—Europe’s invention of a rather bare-bones upgrade of ordinary mixed-traffic streetcars into a faster mode with lots of dedicated lanes, reservations, and exclusive alignments, only occasionally running in street traffic. This notion was expounded in the 1960s and early 1970s by transit visionaries like H. Dean Quinby and Stewart F. Taylor; interestingly, Taylor branded his version of the concept a “Rapid Tramway.”

Really, I think Quinby and Taylor, and like-minded planners like Lou Klauder, Ed Tennyson, and Vukan Vuchic, recognized that similar features had actually been included in many North American streetcar and interurban systems—those historic lines that had been swept away in the motorization mania engulfing American cities from the late 1920s through the 1960s. And Rapid Tramway, a.k.a. LRT, represented a renewed effort to re-install some of that valuable rail transit that had been expunged.

Blending all this together, I reincarnated the original Rapid Tramway as Rapid Streetcar, proposing that the extended capabilities of modern streetcar technology be utilized with high-performance streetcars running at higher speeds on some segments of reserved or exclusive alignments.

I also incorporated two highly advanced, complex concepts: Back to Basics and the KISS Principle (Keep It Simple, Stupid). The idea was to keep the infrastructure and stations as simple and low-cost as possible—modeled more after the lines in New Orleans, Portland Streetcar, Tacoma Link, and Tampa, and less like the “mini-metro” designs that so many new LRT systems seemed to be trying to achieve.

That, in a nutshell, is what I first proposed at the 2004 Rail Conference of the American Public Transportation Association (APTA) in Miami; check out my original paper: Rapid Streetcar: Rescaling Design And Cost For More Affordable Light Rail Transit.

There’s also a a slightly revised, expanded, and annotated version of that original paper (with the same title) available on the Light Rail Now website.

In 2006, I presented a further update of the Rapid Streetcar concept in a paper and presentation to the Joint International Light Rail Conference in St. Louis, co-sponsored by the Transportation Research Board, APTA, and the International Union of Public Transport. See: Applying the Versatility of Streetcar Technology to North American Urban Transit.

Since my 2004 proposal, Rapid Streetcar has been catching on; Portland Streetcar’s expansion from its original mixed-traffic operation into an exclusive railway alignment is one very tangible example. And it’s been further popularized by Reconnecting America in its planning manual Street Smart. And several other cities, such as Seattle, are seriously eyeing this concept.

Let’s just hope they can keep the gold plate away from it.