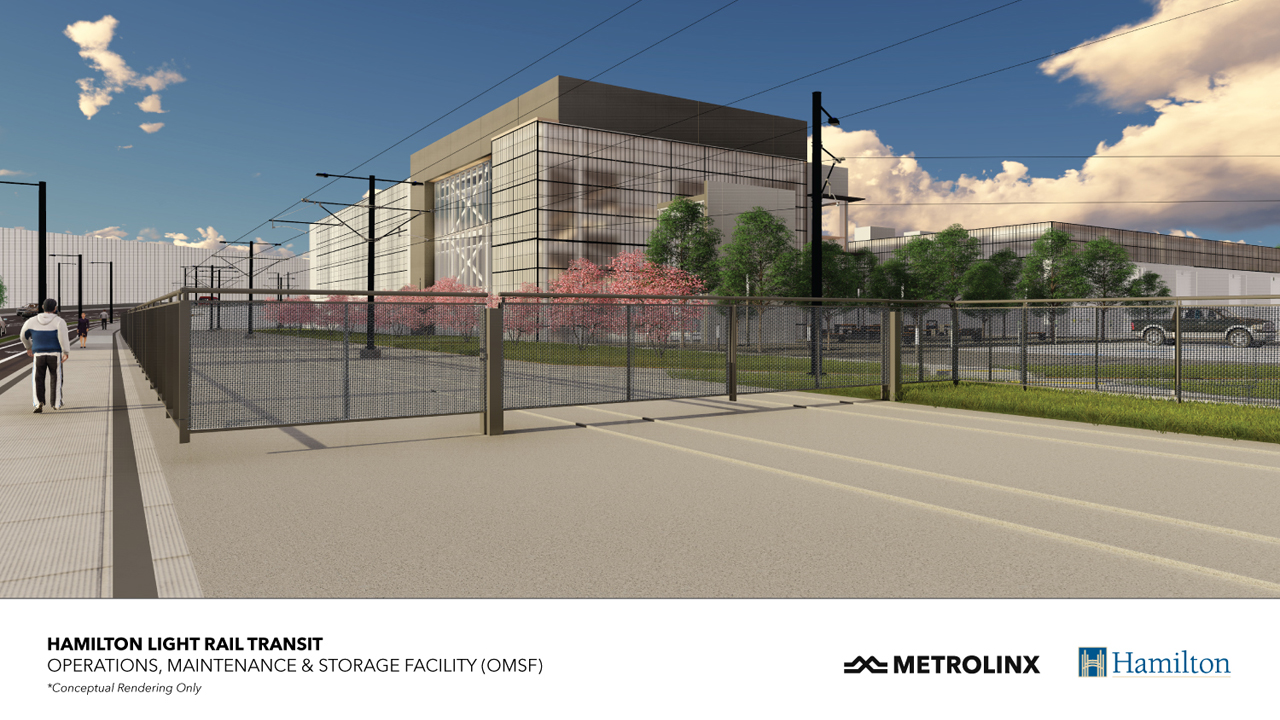 Light rail projects continue to advance in Canada’s Ontario Province, as years of planning, investment and construction gradually come to fruition. And Toronto’s vintage ALRVs have finally been retired.

Metrolinx, the overall transit authority of the Government of Ontario, recently bought a 14.5-acre parcel of land in West Hamilton for the maintenance and storage facility for the Hamilton Street Railway LRT. It was sold to the transit agency by a division of McMaster University. The property was for many years occupied by Westinghouse Canada. One of the factory buildings remains, and will be demolished.

A short section of access track will need to be built to connect the yard to nearby Main Street, on which the LRT will operate. A Canadian Pacific industrial spur passes by one side of the yard, which provides the possibility of LRV delivery by rail.

Construction on Hamilton’s LRT is scheduled to commence in 2020, after several political related delays.

Metrolinx and Infrastructure Ontario, the government contracting agency, have selected Mobilinx Inc. as the preferred consortium to design, build, finance, operate and maintain (DBFOM) the Mississauga LRT line. The formal contract is to be awarded this fall, allowing detailed design work to proceed. The contract’s value will be announced at that time.

Mobilinx was one of three finalists selected in the bidding process. The bids required revision after the province deleted a major part of the project, a loop through Mississauga City Centre, as an economy move, along with a walkway and other relatively minor items. However, provision will be made to allow construction of the vital City Centre portion at a future date.

Mississauga is a city of 791,533 residents. It is located on Toronto’s west border, and extends north from Lake Ontario to the adjacent city of Brampton.

The 11-mile LRT route follows Hurontario Street, Mississauga’s major north-south thoroughfare, from GO Transit’s Port Credit rail station, northward to a terminal at Gateway Mall in southern Brampton. The tracks will be in a reserved center reservation; several bridges and a tunnel are required. Nineteen stations are included in the project.

Service will be provided by 44 Alstom Citadis Spirit LRVs, running in multiple-unit configuration. The cars will be serviced at a maintenance and storage facility to be built near the northern terminus. Alstom’s new LRV assembly facility in Brampton should be ready to begin production by the fall of 2019. Earlier, it was stated that the first Citadis Spirit LRVs would be rolled out by mid-2020. The facility is served by a CN line.

Construction has begun on the Operations, Maintenance and Storage Facility for Toronto’s seven-mile Finch West LRT line. This represents the first physical work on the project, apart from utilities relocation.

The yard site occupies a full city block on the north side of Finch Avenue West, bounded by York Gate Boulevard, Norfinch Drive, and a power line corridor. It will service the 17 LRVs allocated to the line. These could be either Alstom Citadis Spirit or Bombardier Flexity Freedom cars; Metrolinx currently has orders placed with both builders.

Work has involved fencing of the property, grading, and basic road construction. A large number of site trailers have been installed.

The facility is located about one mile west of the LRT’s eastern terminus, Finch West Station on the TTC’s Spadina heavy rail subway. The LRT will be mostly surface reserved track running in the center of Finch Avenue, with short tunnel sections at either end. Opening is scheduled for 2023.

The Finch West LRT, in common with the Eglinton Crosstown line, is being built to railway standard gauge, rather than the TTC’s of four feet, 10 7/8 inches. There will be no track connection between the two new LRTs, as they are about five miles apart. Finch West will serve a densely populated residential area along much of its route, terminating at Humber College, a major educational institution, at its west end.

In a separate development, Metrolinx has ordered 61 Alstom Citadis Spirit cars. This order was placed as a backup in case Bombardier was slow in delivering the 74-unit order of Flexity Freedom LRVs for Toronto’s Eglinton Crosstown LRT, scheduled for a fall 2021 opening. The Alstom LRVs will be similar to those being used on the Ottawa LRT.

Labor Day 2019 in Toronto saw the official retirement of the TTC’s last Articulated Light Rail Vehicles (ALRVs). The TTC placed two of them, cars 4204 and 4207, in service on an abbreviated run on the 501 Queen route, a busy crosstown route on which the cars had operated for many years. The public turned out in large numbers for a final, free ride on these unique streetcars. They certainly did not look like vehicles headed for retirement, as they were in gleaming paint without any scratches, dents or rust. The event was well-covered by the local media.

The TTC plans to keep two ALRVs: one for charters and special events, the other as a parts supply.

The original 52-unit fleet, delivered in the late 1980s, was down to about six serviceable cars by 2019, with the remainder relegated to dead storage or the scrapper. Limited operation occurred this year, due to a perceived lack of reliability because of electrical system problems. However, 4204 and 4207 operated flawlessly on their final outing.

The 75-foot-long ALRVs were manufactured by the now-defunct UTDC (Urban Transportation Development Corporation), an Ontario Government agency, at their Thunder Bay and Millhaven (Ontario) plants. Placement of the order followed several years after operational testing of a UTDC-owned demonstrator ALRV, 4900, in TTC service. This car was not purchased by the TTC, due to incompatability with the fleet ALRVs, and was scrapped after an accident at Millhaven.

The TTC Equipment Department was initially unenthusiastic about purchasing the ALRVs. Concerns included maintenance of the articulation section, and of fare evasion by passengers entering via the rear doors. However, UTDC persuaded the Commissioners to place the order.

Upon arrival, the high-capacity ALRVs entered service on heavily patronized routes such as Queen, Bathurst and Spadina; they also operated for a time on the Lakeshore (Long Branch) route.

In 2015, with delivery of the replacement Flexity Outlook LRVs seriously behind schedule, the TTC decided to rebuild 30 ALRVs to help fill the gap, with the possibility for another 10. The program, however, was terminated after 20 cars had been completed and C$26 million spent (C$24.5 million budgeted).

The work, undertaken by TTC staff at the Harvey Shop, included corrosion repair, flooring replacement, and overhaul of pneumatic air systems, propulsion motors, braking systems, wheels and axles, suspension and structural beams. The budget, however, did not allow for significant electrical systems work, and this ultimately was a major cause of the ALRVs’ downfall.

Nevertheless the ALRV, the TTC’s first articulated rail vehicle, provided enhanced passenger capacity and increased labor productivity for almost three decades. In doing so, they gave the Commission invaluable experience with this type of streetcar. It is entirely fitting that one ALRV will be spared from the scrapyard and join the TTC’s historic vehicle collection. This includes a 1923 vintage Peter Witt car, and two examples from the final, 1951 order of the legendary PCCs.