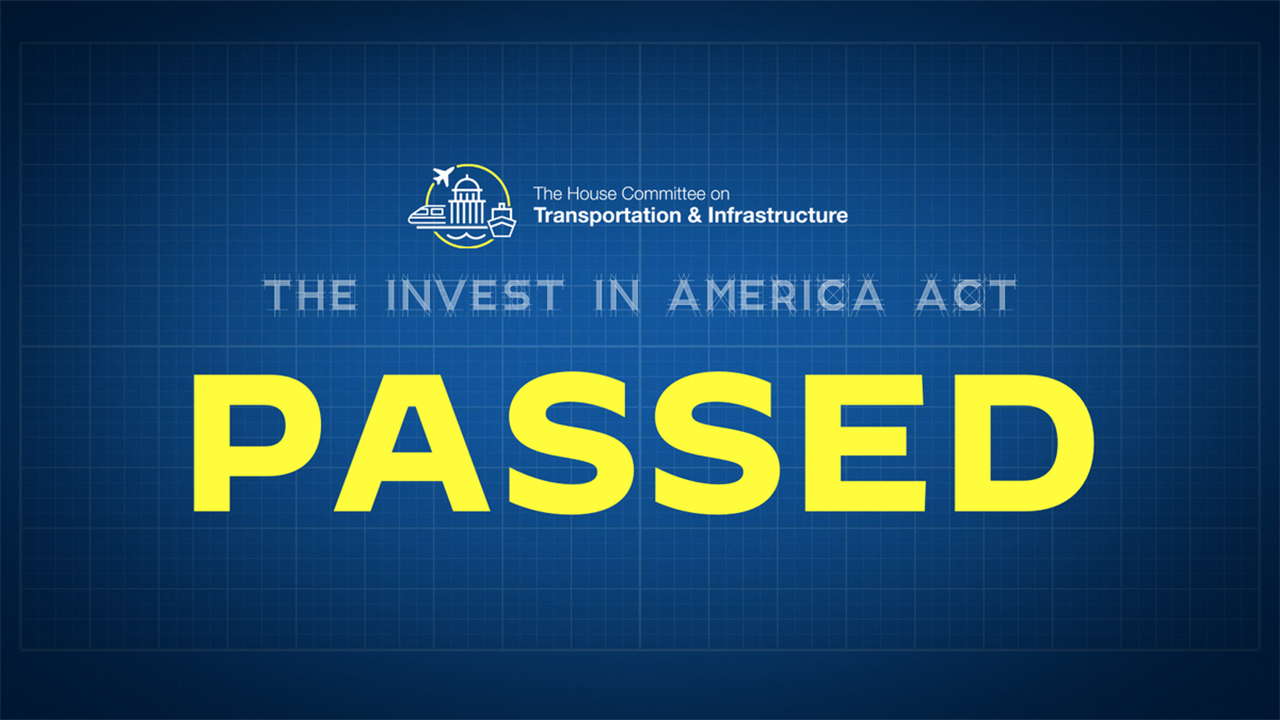 There are other things that get passed that I will leave to your imagination ...

House Democrats crafted it, House Republicans ridicule it, rail labor loves it, APTA likes it, AAR dismisses it, and ASLRRA notes it’s merely a first step in a tedious process: It’s H.R. 3684, the INVEST (Investing in a New Vision for the Environment and Surface Transportation) in America Act, passed by the full House in a largely partisan vote. It has a snowball’s chance in Seattle’s June heat wave of going anywhere. Wasted time, wasted effort? Probably, but that’s Washington.

There’s enough transportation legislation flying around Capitol Hill these days to warrant a flak jacket, and enough contrived acronyms to fill a dictionary. As we used to say in my hometown of Newark, N.J., “Go look it up in your Funk & Wagnalls!”

I think most of us are smart enough to know that H.R. 3684 will one day wind up either 1) sitting on a shelf collecting dust in the Library of Congress, or 2) morphing, like Jeff Goldblum in The Fly, into “Something Completely Different,” as in Monty Python’s Flying Circus. House Democrats hail it as the greatest piece of legislation since Charlton Heston brought the 10 Commandments down from the summit of Mt. Sinai on his tablet computer. House Republicans call it the “My Way or the Highway Bill.” How original!

I also think most of us are smart enough to know that whatever winds up getting passed will be some version of the legislation that President Joe Biden (who by the way does a mean burnout in his ’67 Corvette 327, four-speed convertible, when he’s allowed to drive it) and a bipartisan group of Senators have been hammering out. And hammered they have, mostly avoiding hitting each other’s fingers, or their own.

Politics is the art of compromise. You want to get something done in Washington? Leave your egos at the door. We’ll understand, though, if you feel obligated to act like a narcissistic preacher in public.

Now, if H.R. 3684 will eventually wind up on the Congressional cutting room floor, why is everyone (including me) paying it so much attention—using up electronic ink by proselytizing in press releases, blasting on emails, squawking on Twitter, yelling on YouTube, or freaking out on Facebook? Easy. It’s what we do. There has to be someone out there paying attention, right?

So here, dear readers, is a sampling of what’s crash-landed in my inbox. Some of it makes sense. Some of it doesn’t. I’ll start with a rather insightful, intelligent statement from American Short Line and Regional Railroad Association (ASLRRA) President Chuck Baker:

“Opportunity remains going forward to produce a rail title [in the] Surface Transportation Reauthorization Bill that benefits short line freight railroads and supports the key role [they] can play in growing the economy, protecting the environment, improving transportation safety, and reducing the congestion and maintenance burden of heavy freight on highways.

“Short line freight railroads recognize and support the need for a large, sustained, transformational investment in our country’s infrastructure that will both enable America’s economic success and protect our environment far into the future. To that end, we congratulate Chairman DeFazio and his team for passing a surface transportation reauthorization in a vote of the full House.

“For short line railroads specifically, work remains to ensure that any final legislation helps accomplish the worthy goals put forward—supporting long-term economic growth, improving transportation safety, and protecting the environment.  For small business freight rail, there are a few beneficial provisions in this bill, such as a robust CRISI authorization level and significantly increased multimodal flexibility in the state freight formula program, but, as we have noted before, there are also a number of troubling provisions that will constrain short line growth, efficiency, and investment opportunities. These problematic provisions include new CRISI eligibilities and set-asides which will limit short line success in this crucial program, a crew size mandate that would negatively affect the efficiency of scores of short lines, a blocked crossing provision that would impede freight rail service, an unjustified ban on the safe movement of LNG by rail, the removal of small project eligibility in the INFRA/PNRS program, and improvements to the RRIF program that would not apply to short line applicants.

“Now that this bill has passed through the House and two related bills have advanced through key Senate committees, there will soon be an opportunity to combine these bills—perhaps within the bipartisan infrastructure framework—to create a final legislative product that is beneficial for short lines and the thousands of communities we serve, particularly in small town and rural America.

“We will continue to vigorously engage in this important process, working toward compromises on funding levels, robust support for short line freight rail infrastructure investments, and the removal of provisions that would unduly hinder short line progress. Legislation is achievable that would help short lines continue to advance critical bipartisan priorities—fostering environmental sustainability, improving transportation safety, supporting economic development, enabling mobility, and reducing the congestion and maintenance burden of heavy freight on the nation’s highways—and we look forward to a final product that we would be able to enthusiastically support.”

Damn, Chuck! Something with substance—really. Maybe you should run for public office. That way, we’d have legislators who actually know their subject matter.

Here’s what the Association of American Railroads had to say, from President and CEO Ian Jefferies. It’s short and sweet, with few specifics:

“Today, the House doubled down on the same misguided, divisive policies that ultimately failed a year ago. The INVEST in America Act’s problematic rail title would sidetrack railroads’ ongoing modernization, undermining their ability to compete, serve customers and power the economy into the future. At the same time, the strong bipartisan efforts in the Senate–supported by the President–are progressing toward consensus legislation that will make significant, long overdue investments and pay dividends for generations to come. Now is the time for thoughtful, broadly supported infrastructure solutions, and bipartisan legislation remains the best path to achieving those.”

“APTA, on behalf of the entire public transportation industry, commends the U.S. House of Representatives for passage of H.R. 3684, the ‘INVEST in America Act’, a landmark piece of legislation. This bill will transform America’s public transportation infrastructure, and we thank Speaker of the House Nancy Pelosi (D-Calif.), House Committee on Transportation and Infrastructure Chair Peter A. DeFazio (D-Ore.), Chair of the Subcommittee on Highways and Transit Eleanor Holmes Norton (D-D.C.), Chair of the Subcommittee on Railroads, Pipelines, and Hazardous Materials Donald M. Payne, Jr. (D-N.J.), and House Committee on Ways and Means Chair Richard E. Neal (D-Mass.) for their extraordinary leadership and vision in crafting this legislation.

“H.R. 3684 makes critical investments to surface transportation infrastructure, including $109 billion for public transportation and $100 billion for commuter rail, Amtrak, and other high-performance rail. It puts us on the path to increase access to opportunities for all Americans and build more equitable communities. The INVEST in America Act also addresses the environmental and sustainability challenges facing our communities, nation, and the world. H.R. 3684 also reflects key pillars of APTA’s Surface Transportation Authorization Recommendations, addressing the $105 billion state-of-good-repair backlog, and providing the necessary investment to meet growing demand by funding all projects in the Capital Investment Grant pipeline.

“The passage of the INVEST in America Act is a vital and necessary step to provide the transformational investment in infrastructure the country so desperately needs. We look forward to continuing to work with Congress and the Biden Administration to achieve the shared goal of meeting the growing and evolving mobility demands of our cities andcommunities. The time to act is now.”

“Momentum is growing for the kind of once-in-a-generation investments in infrastructure that will transform our country, create and sustain millions of good jobs, and secure America’s economic vitality for years to come. Passage of the INVEST in America Act by the U.S. House of Representatives has brought us one step closer to these goals.

“By committing unprecedented funding levels to our highway, transit, and passenger and freight rail programs, this historic package will ensure our transportation network can meet the demands of a 21st-century economy. By pairing those investments with strong labor protections, including Davis Bacon, transit labor protections, domestic content and manufacturing requirements, and Buy America rules, this legislation ensures federal dollars create good-paying jobs here in the U.S., with the kinds of safety, wage and workplace protections working people deserve.

“The INVEST in America Act contains a number of worker-first and safety-enhancing priorities TTD and our unions have long fought for, including:

“Today’s passage of the INVEST in America Act marks an important step towards transformative and long-overdue investments in our nation’s infrastructure. TTD and our unions eagerly await the Senate’s bipartisan infrastructure proposal and progress by the White House on the American Jobs Plan.”

Not to be outdone, SMART Transportation Division officials “expressed their appreciation as H.R. 3684 successfully passed out of the U.S. House of Representatives, 221-201, on July 1 with two-person crew and other transportation safety provisions important to TD members remaining intact.” From SMART-TD President Jeremy R. Ferguson:

“This bill is a great step ahead for the country as it works to repair years of inattention given to the country’s infrastructure. The INVEST Act also pays heed to many safety concerns expressed by labor — the essential workers who helped move our nation through the COVID pandemic — bus operators, freight rail workers and transit workers. We thank Peter DeFazio, Donald Payne and all those in the House Transportation and Infrastructure Committee who spurred H.R. 3684 to passage in the full House, and we now look ahead to consideration in the Senate and beyond.”

“The INVEST Act is a surface transportation reauthorization bill that encompasses substantial investment in the nation’s infrastructure as well as in the safety of the people who keep the country moving. H.R. 3684’s components look to protect bus and transit workers from assault, improve school bus safety and maintain safe freight rail operations. It contains increased funding for Amtrak passenger rail service and protects the environment, the public and rail workers alike by putting into law the Rule of 2—that, like a pilot and co-pilot in the air—a certified engineer and a certified conductor remain present in the cab of freight trains when operated through the nation’s communities.

“We truly thank and appreciate those legislators who supported the INVEST Act in its journey through the House and who listened to what we had to say,” Ferguson said. “There is more work to be done and a path to be cleared for this legislation in the Senate, and the members and officers of our union are ready to put in the time.”

“We’re very pleased that the House has wisely moved ahead today on the legislative path to ensuring that rail safety’s Rule of 2 is maintained with the INVEST in America Act, and that the bus safety provisions, Amtrak funding and other rail safety components stay in the bill. Now, similar to last year, the time has come to make it crystal clear to senators who might be on the fence that the safety aspects within this bill are not up for negotiation.”

So there you have it, folks. I won’t go into detail explaining that crew size has never been legislated, having always been negotiated in good faith by the railroads and the unions that represent their workers, under the Railway Labor Act. Doubtless, that will continue, as it should.

Stayed tuned for more episodes of the hit Capitol Hill Netflix reality series, If The Price Is Right, Let’s Make A Deal.