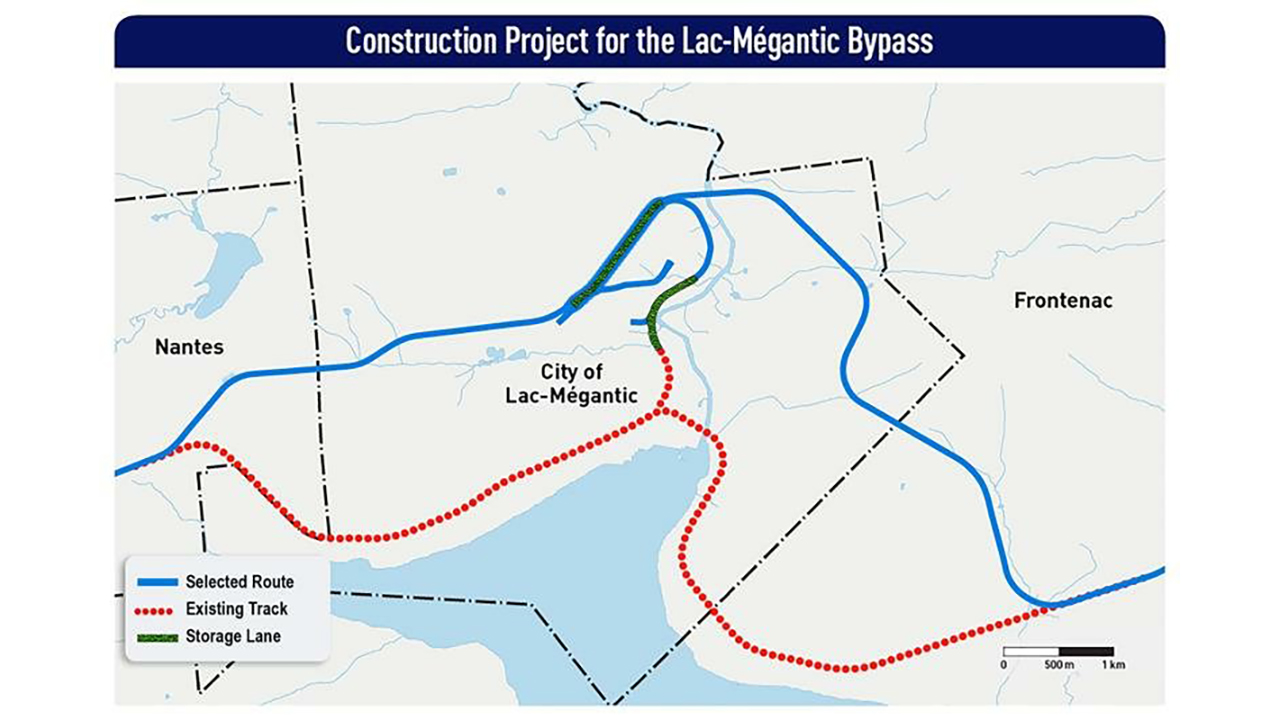 Nine years after the July 13, 2013 crude oil train runaway wreck at Lac-Mégantic, Quebec that claimed 47 lives and destroyed much of the village’s downtown, the Government of Canada and Transport Canada continue preliminary work on building a bypass rail line.

The line, now owned by Canadian Pacific, continues to operate through town. The bypass line is a government project. “CP continues to fulfill its commitments to the federal government for the delivery of this project,” spokesman Andy Cummings told Railway Age.

The new 7.75-mile (12.5-km) line will pass through the municipalities of Nantes, Lac-Mégantic and Frontenac, specifically between mileposts 113.27 in the subdivision of Moosehead and 3.49 in the subdivision of Sherbrooke. The project also includes building two yard tracks in the Lac-Mégantic industrial park to allow the relocation of Nantes and Frontenac railway operations to this location. At the end of the project, the existing track will be dismantled.

Canadian Minister of Transport Omar Alghabra recently announced details of “a new public consultation on hydrology and the measures to mitigate the potential impacts of the Lac-Mégantic rail bypass project.” He also announced that the negotiation period between Public Services and Procurement Canada and the owners is extended until Nov. 4, 2022.

The public consultation on hydrology (the study of the distribution and movement of water both on and below the Earth’s surface, as well as the impact of human activity on water availability and conditions) will be held from Aug. 29 to September 30, 2022. “During that period, citizens will be able to read the hydrological expert reports, as well as the mitigation measures and planned follow-ups,” Transport Canada said. They will also be able to submit their questions and comments in writing to Transport Canada.

In addition, information sessions for citizens will be held in person on Sept. 13 (for those directly affected by the project), in person on Sept. 14 (open to the public), and virtually on Sept.16 (open to the public). The in-person sessions will be held at the Centre sportif Mégantic in Lac-Mégantic. During those sessions, citizens will be able to learn more about the project and ask questions to Transport Canada and Canadian Pacific. Elected officials from Lac-Mégantic, Nantes and Frontenac will also be called upon to comment on the reports and the mitigation measures as part of this consultation. The Waban-Aki and Huron-Wendat First Nations will be consulted in September and October 2022.

“A few weeks ago, some owners requested a further extension of the negotiations with Public Services and Procurement Canada, in order to have more time to continue constructive exchanges,” Transport Canada said. “This extension will also allow Transport Canada to complete the public consultation on hydrology and give owners the opportunity to consider the elements communicated as part of this consultation.”