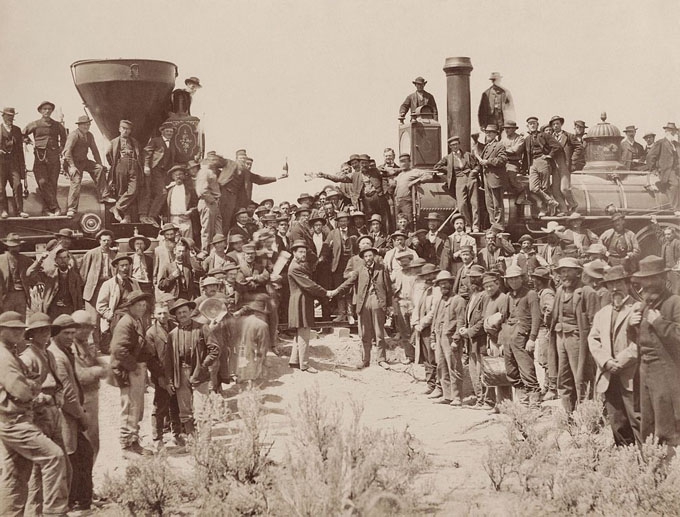 Union Pacific this week launched a two-year celebration commemorating the completion of the transcontinental railroad nearly 150 years ago.

The railroad’s track crews worked west from Omaha while Central Pacific built its line east from Sacramento, meeting at Promontory Summit, Utah, where a golden spike was driven to mark the occasion on May 10, 1869.

Union Pacific representatives this week presented Sacramento Mayor Darrell Steinberg with a commemorative golden spike in nearly the exact location where 1860s California Gov. Leland Stanford broke ground for CP in Sacramento. (Stanford served as president of both the CP and Southern Pacific.)The presentation was broadcast on Facebook Live, kicking off Union Pacific’s two-year celebration of the Great Race to Promontory.

The company introduced up.com/goldenspike, an interactive website featuring rare photographs and animated maps illustrating the journey through 46 communities in Nebraska, Colorado, Wyoming, Utah, Nevada and California profoundly impacted by the railroad. UP also launched a series of activities and celebrations that bring each community’s along the line to life.

The railroad has created a Community Traveling Exhibit documenting each community’s connection to the transcontinental railroad’s construction with photographs and descriptions. Education materials will be available to schools and other organizations hosting the exhibit.

An encased commemorative golden spike has been created for community partners along the transcontinental route. A plaque inside the box reads, “Towns developed, and the bond between UP and the early settlements grew. As we celebrate the 150th Golden Spike anniversary, UP is proud of these long-standing community relationships.”

“Race to Promontory: The Transcontinental Railroad and the American West,” a landmark art exhibition in partnership with the Joslyn Art Museum highlights Union Pacific’s collection of original photographs documenting the transcontinental railroad’s construction. UP has the world’s largest collection, some of which have rarely been seen by the general public. Exhibitions are planned for California, Utah and Omaha, Nebraska.

Union Pacific, which currently operates two preserved steam locomotives and is renovating another, is running a steam-powered heritage train over the transcontinental railroad for community celebrations prior to the actual 150th anniversary on May 10, 2019. The carrier plans to host community activities and events along the line as part of its two-year celebration.