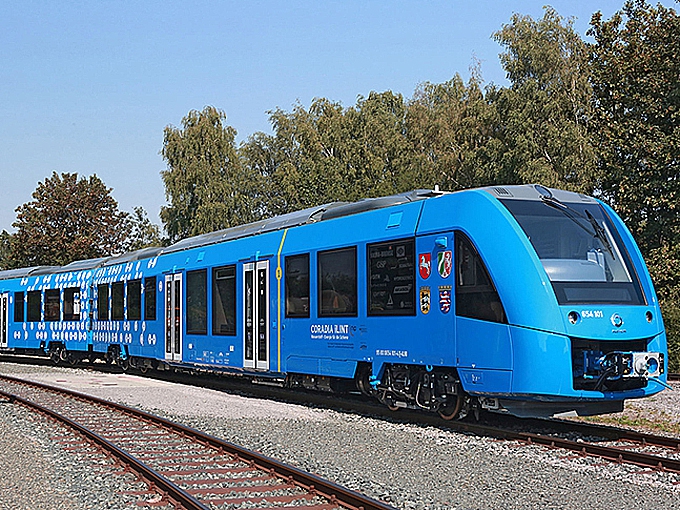 Alstom’s Coradia iLINT, described as the world’s first CO2-emission-free train, debuted at the InnoTrans show in Berlin in late September. Its fuel cell drive system combines hydrogen with oxygen; the chemical reaction produces electricity, which is stored in lithium-ion batteries, and steam and condensed water—the train’s only emissions. Hydrogen is stored onboard in tanks in liquid form; it’s combined with oxygen drawn from the atmosphere. (Spacecraft fuel cells carry liquid oxygen on board.)

With a top speed of approximately 90 mph, the Coradia iLINT can operate up to 500 miles on a single fueling and carry up to 300 passengers. Alstom says it’s the world’s first fuel-cell-powered passenger train that can regularly operate long-distance. It’s also low-noise.

“Despite numerous electrification projects in several countries, a significant part of Europe’s rail network will remain non-electrified in the long term,” Alstom notes. “In many countries, the number of diesel trains in circulation is still high—more than 4,000 DMUs (diesel multiple-units) in Germany, for instance. Alstom is among the first railway manufacturers in the world to develop a passenger train based on [hydrogen fuel cell] technology. To make the deployment of the Coradia iLINT as simple as possible for operators, we offer a complete package, consisting of the trainset and maintenance, as well as the whole hydrogen infrastructure, thanks to help from partners.”

The Coradia iLINT’S launch follows letters-of-intent signed in 2014 with the German Landers of Lower Saxony, North Rhine-Westphalia, Baden-Württemberg, and the Public Transportation Authorities of Hesse for use of a new-generation, emission-free train equipped with fuel cell drive. Alstom is testing the trainsets throughout 2017, and expects to begin revenue service in late 2017 or early 2018 on the Buxtehude-Bremervörde-Bremerhaven-Cuxhaven line in Lower Saxony, Germany.

Assembled at Alstom’s Salzgitter, Germany, plant, the Coradia iLINT is based on the Coradia Lint 54 DMU. Though its price is yet to be announced, Alstom anticipates its operating costs will be similar to those of a DMU.

The Coradia LINT is a single- or two-unit articulated railcar The acronym LINT is short for the German “Leichter Innovativer Nahverkehrstriebwagen” (light innovative local transport rail vehicle). It was originally designed by Linke-Hofmann-Busch (LHB), which Alstom acquired in 1996.