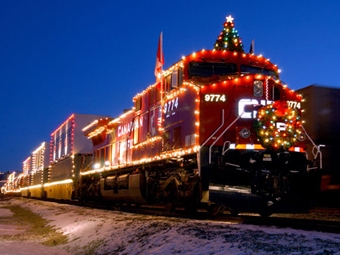 Canadian Pacific’s Holiday Train program is returning to the rails for a 16th year to raise money, provide food, and promote awareness for food banks and hunger issues across Canada and the U.S. Since 1999, the program has raised close to C$9.5 million and 3.3 million pounds of food for North American food banks. Each 1,000-foot train consists of 14 railcars decorated with hundreds of thousands of LED lights, with a modified boxcar that serves as a traveling stage for performers.

“The Holiday Train is all about the community coming together over the holiday season and helping each other out with donations to local charities,” says CP CEO E. Hunter Harrison. “We’re grateful that our train of lights and top musical talent are welcomed with open arms, and that this has become a holiday tradition in our communities.”

Leaving the Montreal, Quebec, area on Nov. 26 and 27 respectively, CP’s U.S. and Canadian Holiday Trains will make a three-week journey to more than 150 communities. The U.S. Holiday Train will travel across the U.S. Northeast and Midwest before its final show Dec. 17 in Weyburn, Saskatchewan, while the Canadian train will travel west and wrap up its journey Dec. 18 in Port Coquitlam, B.C.

A number of musicians will be joining the Holiday Trains this year, including the pop rock band Odds and Jim Cuddy (of Blue Rodeo fame) on the Canadian tour and, up-and-coming country star Kira Isabella along with a-cappella sensations Home Free in the U.S. Communities are encouraged to check the schedule online to see which performers will make a stop in their town. The full CP Holiday Train schedule, including downloadable photos and a route map, is available on the CP website.