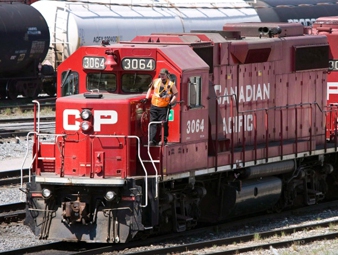 Canadian Pacific Railway on Tuesday launched an awareness campaign highlighting the safety benefits of the prevetative use of inward-facing cameras in the cabs of locomotives.

The company also called on Canada’s Minister of Transport to pass new legislation that would mandate locomotive video and voice recorders (LVVR) technology.

In a statement, the railroad said the campaign’s website, www.cprailsafe.ca, specifies how it intends to use the technology to reduce risk, improve safety, and assist in preventing accidents.

Labor and other groups have opposed the cameras over workplace privacy concerns and how management would use data.

“We are proud to be running the safest railway in North America, but we can always do better and having the ability to use inward-facing cameras allows us to be even safer,” said Keith Creel, CP’s president and chief executive, in a statement. “This is a preventative, proactive, behavior-changing tool the industry should have been allowed to use years ago.”

Current regulations allow inward-facing cameras to be used only by Canada’s Transportation Safety Board for post-incident investigation.

“Having the ability to use this technology in a proactive manner as opposed to only after the fact would allow us to prevent incidents, instead of explaining them,” said Creel. “This technology would be another tool in the broader package of rules, regulations and our safety management system suite – each of which protects the public, our employees and the goods we transport for our customers. We recognize the need to use this technology in a way that is respectful of our employees, and are committed to doing so.”

The railroad said it uses inward-facing cameras in 49 of its locomotives in the United States. In 2016, CP had its lowest-ever train accident frequency.

“We implore the government to do what is right and legislate the proactive use of inward-facing locomotive cameras,” Creel said.

Canadian Pacific said it was open to discussions with regulators and stakeholders to determine how proactive use is defined given the understanding that the technology must be used to prevent incidents.