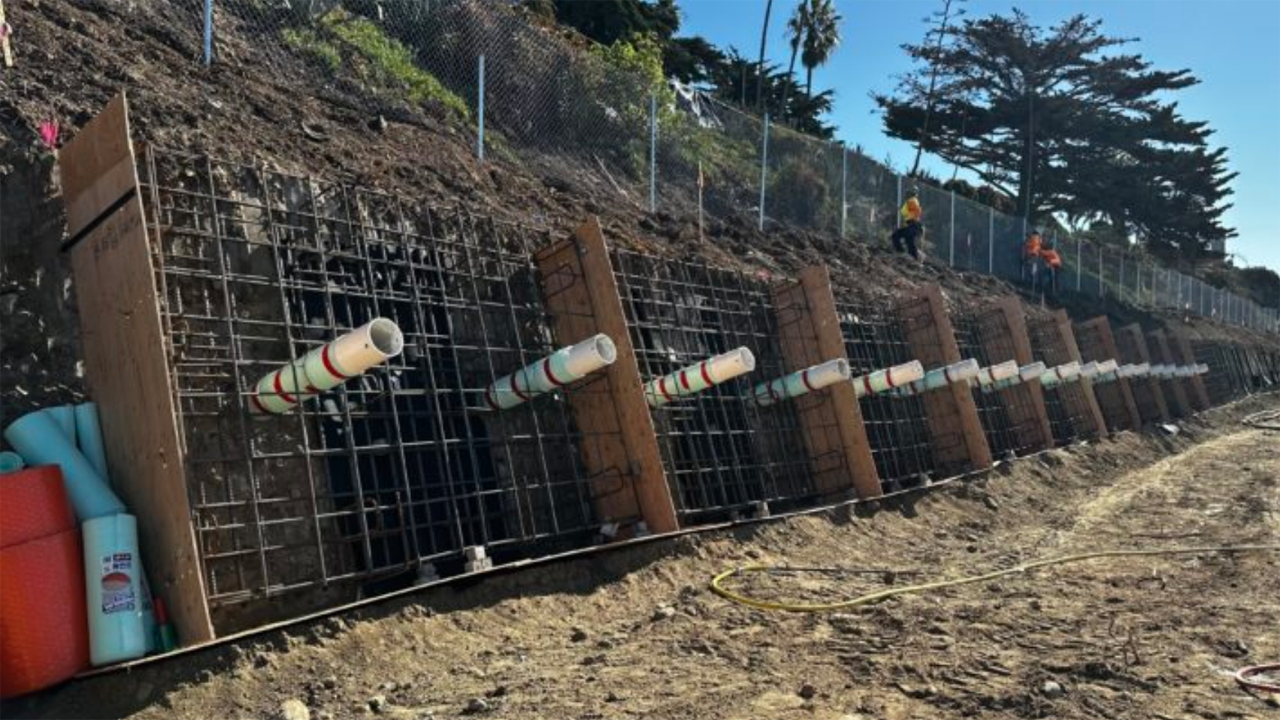 According to OCTA, the first row of ground anchors are in place to stop the track from moving in south San Clemente, allowing passenger service to safely resume on weekends while construction work continues on weekdays. (Photograph Courtesy of OCTA)

Construction work will continue on weekdays until the project is completed, which is estimated to be at the end of March.

Amtrak and Metrolink on Sept. 30, 2022 suspended operation of passenger services between Irvine and San Diego, due to safety concerns with the rail infrastructure in San Clemente following heavy rains from Tropical Storm Kay. OCTA, which owns the track, began conducting emergency maintenance. BNSF, which operates through the area, brought materials to the site.

On Oct. 4, the OCTA Board of Directors and the California Transportation Commission (CTC) held special meetings to declare an emergency need for rail track stabilization, estimated to cost $12 million. CTC allocated $6 million from the State Transportation Improvement Program, and OCTA is working with state and federal officials to secure the rest.

In November, OCTA and geotechnical contractor Condon-Johnson & Associates Inc. began stabilization work, which is being completed on a privately owned slope along 700 feet of track between the ocean and homes above in the Cyprus Shore Homeowners Association, south of the San Clemente Pier. According to OCTA, work has involved drilling large steel anchors more than 130 feet long into the bedrock of the slope adjacent to the track to prevent it from pushing the track further toward the ocean. The track had moved as much as 28 inches between September 2021 and September 2022 because of storm surge and sand erosion on the coastal side and the gradually sliding hillside on the other, according to OCTA.

Track movement stopped after crews finished installing and locking off the first row of grade beam panels and ground anchor tiebacks that are stabilizing the slope, OCTA reported on Jan. 23. It said “geotechnical experts have confirmed that the first row of more than 100 ground anchors drilled into the bedrock along the 700 feet of track have halted its movement.”

Crews are now excavating for installation of the second row of tiebacks and grade beams, OCTA said.

Recent heavy rains have led to delays in the construction, which is now estimated to be completed by the end of March. Weekday passenger rail service could also be restored at that time, OCTA said.

“Even with the recent heavy rain and high tides, our approach to this project has proven effective in keeping the track from moving and we’re pleased to announce that passenger service can safely resume on weekends,” said OCTA Chairman Gene Hernandez, also the Mayor of Yorba Linda. “I want to thank the public for their patience and I hope everyone can understand that ensuring passenger safety guides all of our actions.”