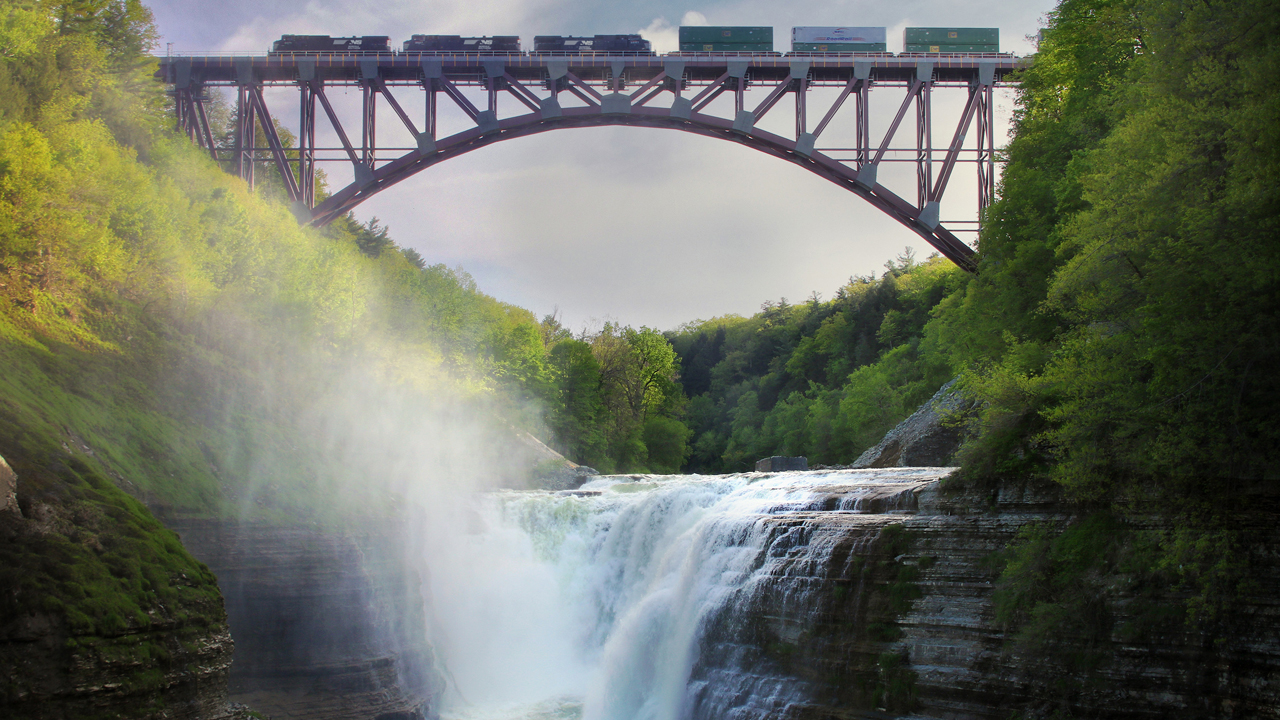 Norfolk Southern and New York State on May 24 dedicated the new Genesee Arch Bridge on NS’s Southern Tier Line (ex-Conrail, ex-Erie), which spans the 235-foot-deep Genesee River Gorge, known as the “Grand Canyon of the East.” 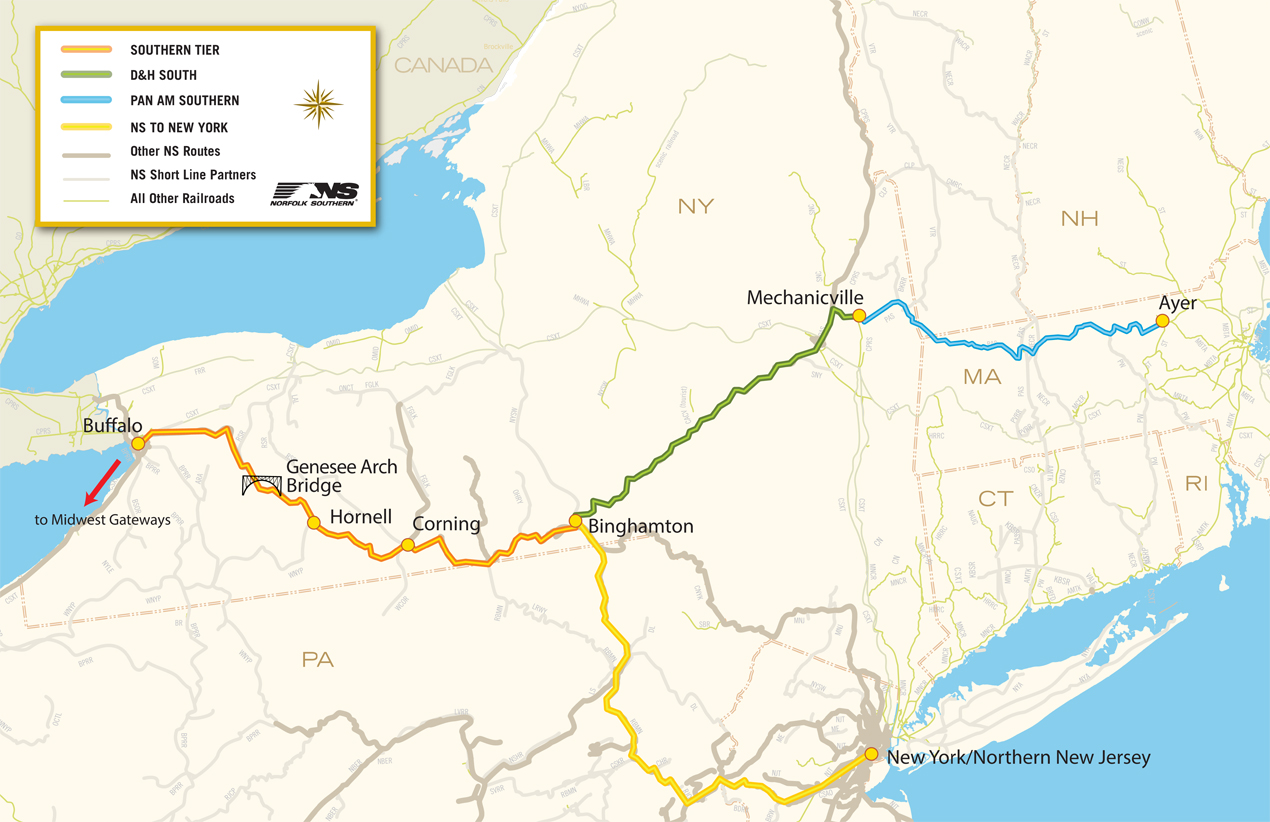 Located between Buffalo and Binghamton, the Genesee Arch Bridge enables NS to transport railcars loaded to the industry-standard 286,000 pounds GRL (gross rail load). The old iron truss bridge it replaced, built in 1875 by the Erie Railroad, was “unable to support modern freight rail needs” and “created supply-chain inefficiencies.” Railcar weights had to be restricted to 273,000 pounds—13,000 pounds below the 286K standard—and train speed was restricted to 10 mph. “Trains crossing the new bridge are operating at up to 30 mph with fully loaded cars,” NS pointed out. After two years of construction, the railroad began operating trains in December 2017 over the new span, constructed 75 feet south of the former bridge. 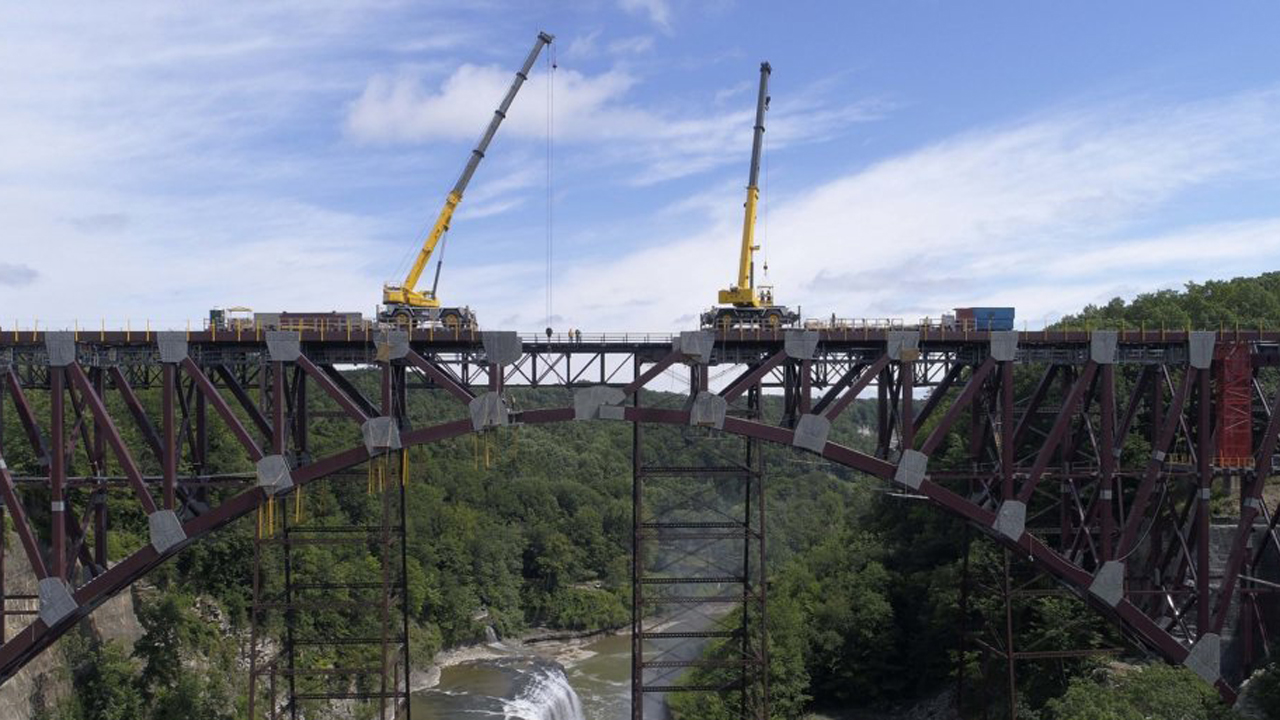 Genesee Arch Bridge under construction. The span it replaced, the Erie Railroad Portageville Bridge, can be seen behind the new structure.

The new bridge connects New York State businesses to markets in the Midwest and New England, trade with Canada, and access to New York City. New York State-based businesses benefitting include 10 short line railroads that service and connect local industries to NS’s network. NS transports freight across the Southern Tier Line for about 1,100 customers in more than 20 states.

Through the partnership, Norfolk Southern also improved trails and public access to Letchworth State Park and preserved portions of the old bridge, which has been dismantled, for use in historical exhibits. The new bridge’s arch design “minimizes the railroad’s environmental footprint in the Genesee River and frames a striking view of the river gorge,” NS noted. 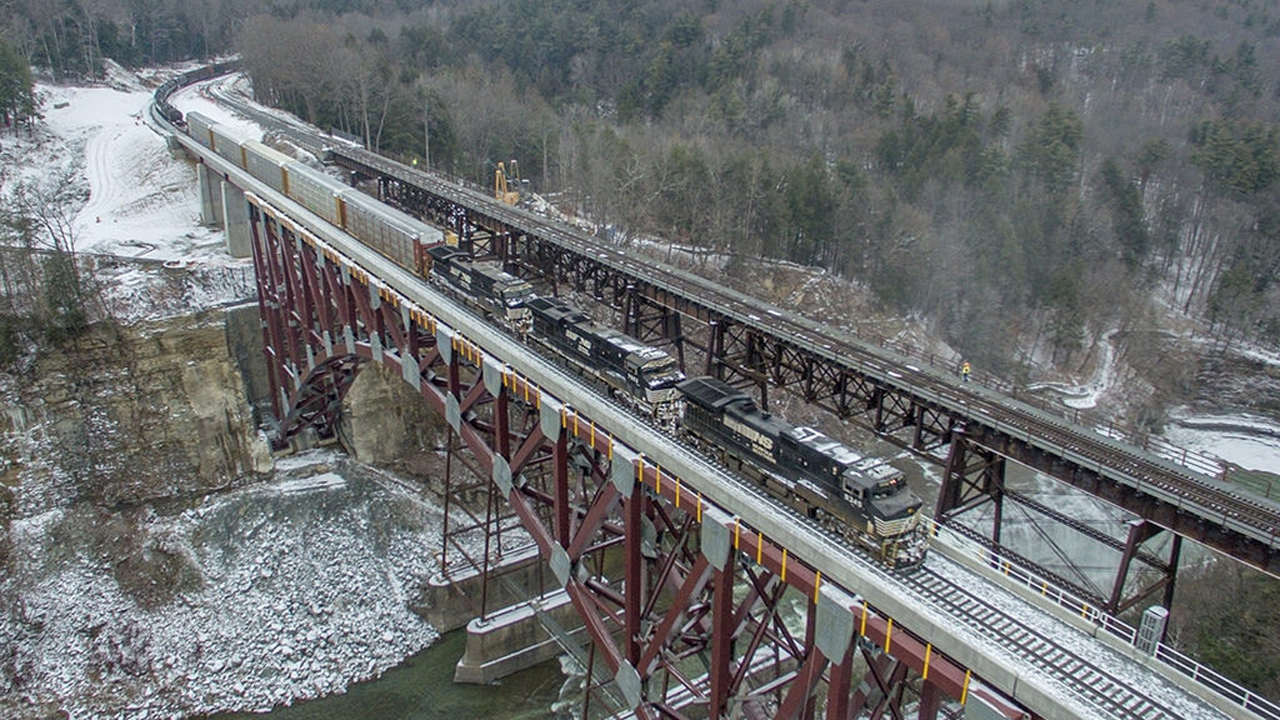 The first Norfolk Southern movement across the new bridge occurred in December 2017, following two years of construction. The span it replaced, the Portageville Bridge, can be seen at right. It has since been dismantled, with portions preserved for historical purposes.

The Genesee Arch Bridge, named through a social media campaign, “ushers in a modern era for freight rail in New York’s Southern Tier,” NS Chairman, President and CEO James A. Squires said at the dedication ceremony. “The successful partnership we are here to celebrate demonstrates that big things can be accomplished when the private sector and the public sector work together to achieve common goals. The new Genesee Arch Bridge is literally a bridge to the future. It represents our shared commitment to support jobs and economic growth that will benefit businesses and communities across New York for generations to come.”

“This modern engineering marvel demonstrates Norfolk Southern’s commitment to meet our customers’ transportation needs while being good stewards of the environment,” said NS Vice President Engineering Phil Merilli. “Only a few arch bridges of this type have been built by the rail industry in the past century, making this a truly unique experience.”

“The completion of this new rail bridge complements the beauty of Letchworth State Park as park visitors will continue to marvel at one of the more impressive structures spanning the picturesque Genesee River gorge,” said New York State Parks Commissioner Rose Harvey.

“The dedication of the new Genesee Arch Bridge is a celebration of years of planning and hard work,” said State Sen. Patrick M. Gallivan. “We can all marvel at the ingenuity of the engineers who designed the bridge in such a way that it not only meets the transportation needs of the 21st century; it restores the Genesee River to its natural state and complements the beauty of Letchworth State Park. This new span will support the economy of the Southern Tier for years to come and is a symbol of our bright future.”