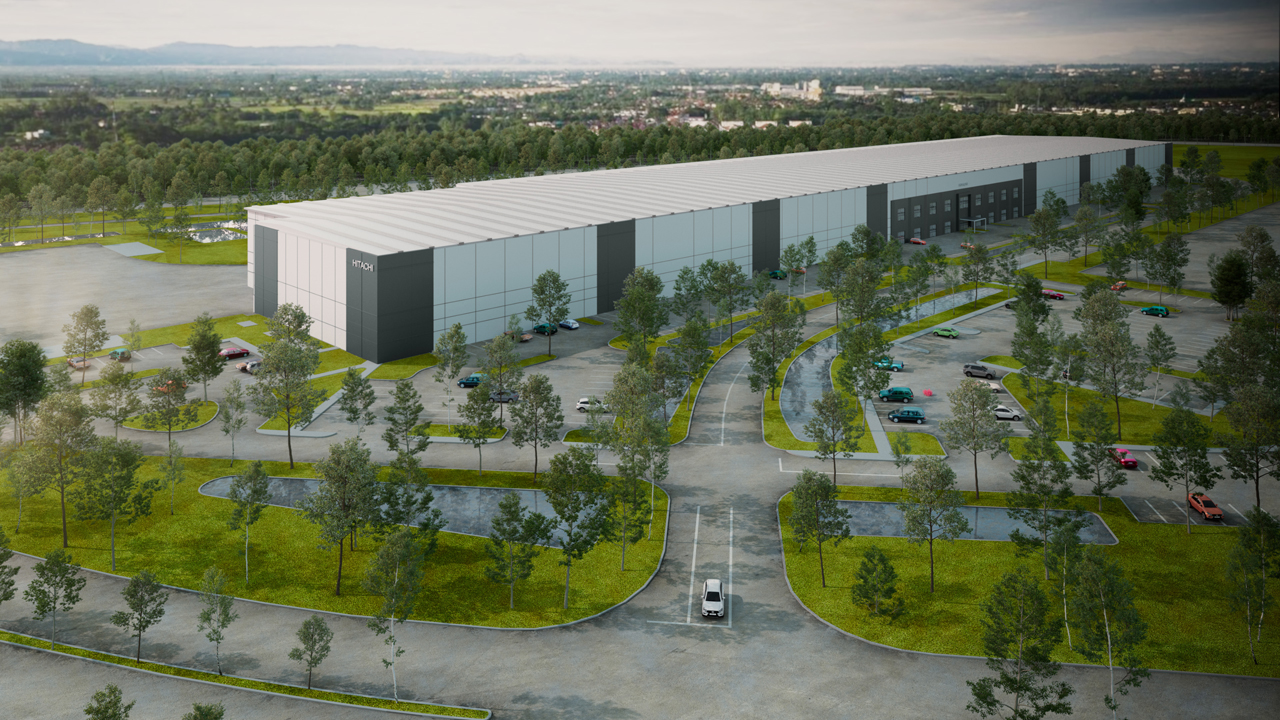 Ryan Companies is leading construction at the 41-acre site, where land clearance, plus the concrete deck and a majority of the external concrete walls—including 248 13-foot-by-36-foot panels—have already been completed. Some 1,050 tons of steel for joists, girders and structural steel columns and 12,430 cubic yards of concrete will be used for the 307,000-square-foot-factory, which is slated to employ 460 people.

Nearly 60% of the factory’s construction value is to be spent with suppliers from across the region, equating to more than $40 million in direct and indirect economic impact, according to Hitachi, which noted that 27% of the total expenditure is expected to go to Small Business Enterprises (SBEs).

Andrew Barr spoke with Railway Age ahead of the event to discuss the factory as well as Hitachi’s growth plan for North America.

“I embarked on a strategy to grow our North American business three or four years ago, so this [plant] is the material start of that process for rolling stock and railcar manufacture,” Barr said. “We’re establishing for the first time a permanent base in the U.S.A. so I’m very pleased we’ve chosen Maryland as the site to do that. We’ve got rolling stock plants all over the world—Italy, U.K., Japan—and this one will be the combination of all of our experience from that.” The new plant, he said, will be “modern and open” and include a “flexible interior, which means we can change the manufacturing program for each car design [from metro to high speed]. We use a high level of digitalization to support the manufacturing process. Hitachi has a digital platform called Lumada, which is applicable to many different industries, and in this particular case, we’ve used it to maximize the amount of automation that we can have inside the [Maryland] car plant. We can manage [car] construction in real time so that you can actually see the progress and make sure that the materials and the components are available as of when they’re needed, rather than being stockpiled on site. Because it’s a new plant, of course, the working conditions should be excellent, which means that it’s designed for people to want to work there.”

The plant will include a large production area, warehouse and main office, and an 800-yard test track to allow dynamic train testing on site. (Download video below for a tour.)

The first order to be fulfilled will be for WMATA. Placed in March 2021, it includes 256 8000-series rapid transit cars, which will replace aging 2000- and 3000-series cars that have been in service since the early 1980s and were manufactured by Italian firm Breda (now Hitachi Rail Italy). If all options in the contract are exercised, a total of 800 cars will be supplied to the agency, worth up to $2.2 billion. Hitachi announced last year it would manufacture the car body structure, fit out the trains, and carry out final assembly at the new plant, with initial pre-series trains slated to be delivered in 2024.

How will the cars be different from the previous 7000 series? While externally they will be similar, internally they will use IoT train standards, Barr said, explaining that the trains will be controlled wirelessly. “Normally rolling stock cars have lots of wires inside them, typically about 30 kilometers, and we’ve replaced that with wireless control, which makes them more reliable and also helps us reduce weight,” he told Railway Age. “They’ll also use the very latest subway design, so the layout is set up for carrying lots of people [with 130 seats per pair of cars] and also for regular stops and getting on and off. Sustainability is an important part of our future, so the electrical traction is using a technological SiC, silicon carbide, which is more energy efficient than previous motor designs, so it’s the latest generation of electrical supply as well.” (Editor’s Note: SiC is a semiconductor material composed of silicon and carbon.)

The plant, located in the greater Hagerstown, Md., region, will be 90 minutes from WMATA’s Greenbelt Rail Yard, where the completed railcars will be delivered. It is expected to produce up to 20 railcars per month on a single shift once fully operational.

Going forward, Barr told Railway Age that Hitachi is hopeful the Connect 6ix consortium, of which it is a part, will be awarded the Rolling Stock, Systems, Operations and Maintenance (RSSOM) contract for the 9.7-mile (15.6-kilometer) Ontario Line, a planned Toronto Transit Commission (TTC) rapid transit line linking the Ontario Science Center and Exhibition/Ontario Place (see map below).

Canada’s Infrastructure Ontario and Metrolinx on Sept. 14 announced that Connect 6ix was the preferred proponent team for the RSSOM contract; negotiations to finalize the contract continue, with an expected award date later this year.

“We think in the next month or so we should have a good view on the final likely award date,” Barr told Railway Age. “But I’m excited; it’s a great opportunity for us. I think for Maryland having that continuation [of work on the Ontario Line cars] is a great story, so you can keep that production going.”

Hitachi is also “working with a number of customers now to see what other opportunities there might be” for the plant, he said.

What are other areas for company growth in North America? “We have a significant office in Pittsburgh, Pa., [for Hitachi Rail Signaling and Transportation Systems] and projects in places like San Francisco, Baltimore, Boston and Honolulu—that is my favorite one—and I’d like to see that growing,” Barr said. “I think the metro market offers the first opportunity for that, but also longer-distance intercity trains, as the USA invests more in getting people back onto trains. I know there are lots of proposals to build lines and invest in the rolling stock in America and we would be an active part of that process. …

“We’ve got experience in all different types of trains. We’ve built the Shinkansens in Japan, and in Italy we launched a few weeks ago the train called the Blues, a tri-mode hybrid train, which has a diesel engine right now, but it’s our long-term goal to get rid of that. I think battery trains alongside those that are electrically powered—that get power from overhead wires—form the long-term future of passenger rail. Getting that fed into the U.S. is a challenge but ultimately a good opportunity. We’ve got our technology in Europe, so I’m looking forward to bringing that across to see where we can maximize it.”

For details on Hitachi’s business in Europe and Italy, and its deal to acquire Thales’ Ground Transportation Systems, which is slated for completion in early 2023, read “Batteries and digitalisation key in Hitachi’s growth strategy,” by Kevin Smith, Editor-in-Chief of International Railway Journal, a Railway Age sister publication.