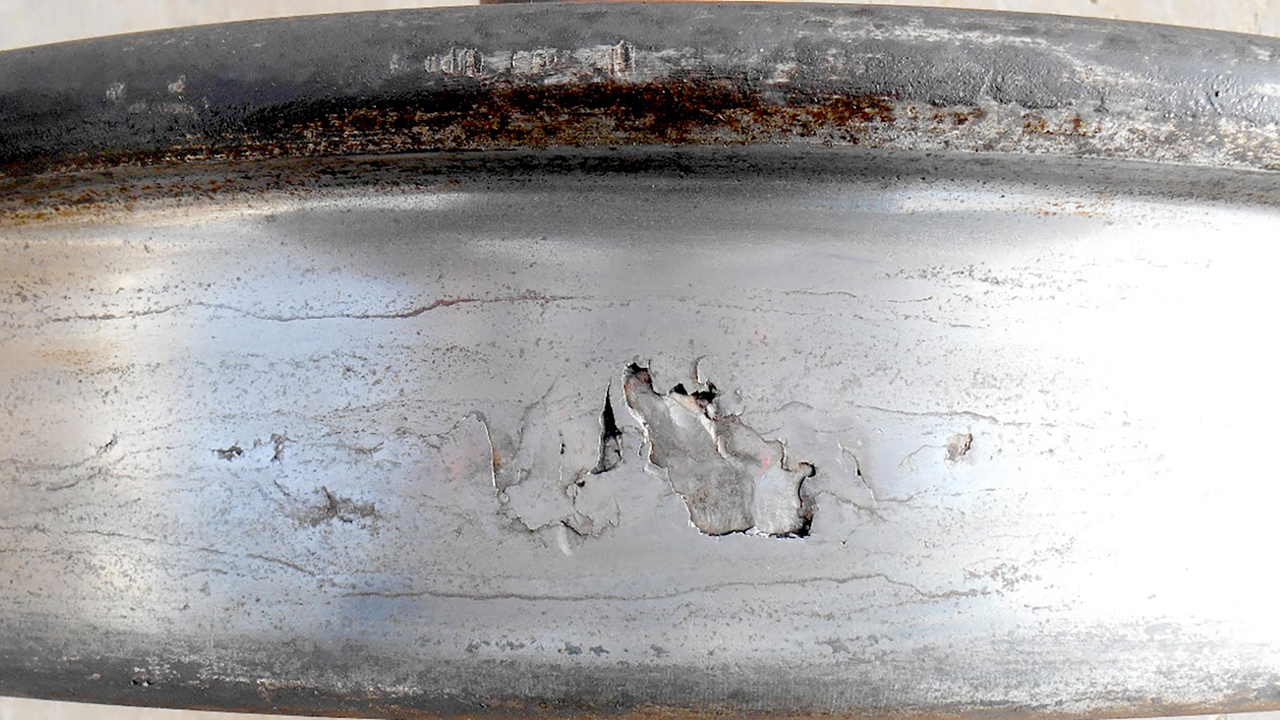 RCF tread surface damage on a wheel removed from a car with disabled brakes. (TTCI picture)

The Federal Railroad Administration (FRA) granted an enforcement discretion for these eight cars to operate with disabled brakes in revenue service between 2016 and 2020. Trains moving these cars were required to contain enough cars to maintain at least 95% operational brakes. This requirement provided sufficient safety precautions as evidenced by the fact that no accidents, incidents or injuries occurred due to operating these eight cars with disabled brakes for more than three years in otherwise normal service.

Wheel wear and tread surface damage have long been thought to be influenced by the abrasive contact and heat developed through tread braking. Thermal mechanical shelling is the acceleration of near-surface rolling contact fatigue (RCF) damage on wheel treads due to elevated wheel temperatures. These results provide important insight into the effects of tread braking for the particular service environments being evaluated, but the results do not cover the full range of operating environments in North American freight service.

The air brakes on the D truck of the three well cars were disabled along with the entire air brake system of the five coal hoppers. The E truck of the well cars and five additional coal cars with normally functioning brakes were included in the test as control groups so the performance of the groups could be identified with and without air braking. None of these changes affected the operation of the handbrakes.

New wheelsets were used for both the test and control groups to eliminate the influence of pre-existing conditions. Researchers conducted periodic inspections of the test cars, including photo-documenting visible wheel tread damage and collecting wheel profile measurements for wear calculations. These inspections were easier to schedule on the coal cars traveling in a unit train compared with the well cars that did not travel together. Repair records were used to assess wheel longevity.

In addition to the periodic inspections, detailed examinations were conducted on a total of four wheelsets removed due to high impact loads from one well car with disabled brakes and two coal cars with disabled brakes. These examinations included various combinations of ultrasonic testing, magnetic particle inspection, optical microscopy, and metallurgical analysis. All four wheelsets showed characteristics consistent with typical RCF tread damage observed on wheels in normal revenue service operations. The figures above show two examples of the tread damage found on wheels removed from cars with disabled brakes. The investigation indicated the damage was due to RCF alone with no indication of the wheels sliding on the rail.

Upon examination of the locomotive event recorder files representing 1,200 miles from two eastbound trips with the loaded coal cars, it was discovered that the air brakes were applied 91 times at initial train speeds greater than 15 mph. Based on the reduction in brake pipe pressure and train speed, none of the applications were estimated to have generated wheel temperatures much in excess of 200°F.

In conclusion, this testing demonstrates that typical wheel shelling from RCF can and does occur independent of heating from tread braking. Despite the application of the coal car brakes dozens of times per trip, it is not clear that the wheel temperatures were warm enough to influence wear or shelling. In fact, neither car type showed statistical differences in wheelset survival based on the condition of the brakes. Although the effect of braking on the wear rates of the well car wheels was inconclusive due to the data scatter and small sample sizes, the coal car wheels did not show any wear penalty from tread braking.