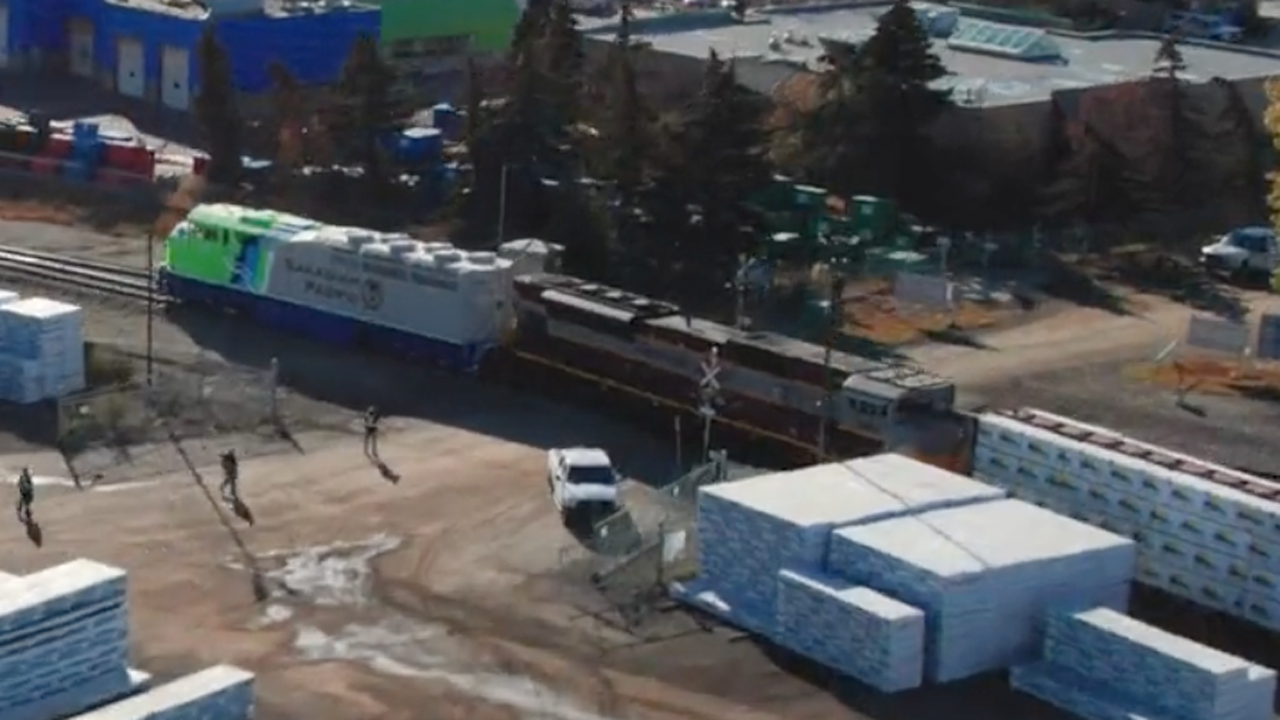 CP on Nov. 16 reported via LinkedIn and Twitter that the linehaul unit pulled seven freight cars from a customer facility, and shared a video (above). The locomotive also recently pulled the Empress, CP’s 1930-vintage steam locomotive, at its Calgary mechanical shop (see video below). “A century ago, 2816 entered service moving people and goods across Canada,” CP wrote in a Nov. 16 LinkedIn post. “Today, CP teams are prepping 2816 for a special cross-continental voyage from Calgary to Mexico City to celebrate completion of the proposed CP-KCS [Kansas City Southern] merger, pending regulatory approval, and the connecting of a continent through the creation of CPKC [Canadian Pacific Kansas City].” (CP President and CEO Keith Creel, Railway Age’s Co-Railroader of the Year for 2022, first announced the special voyage in September 2021, during an interview with Editor-in-Chief William C. Vantuono.)

CP’s Hydrogen Locomotive Program began in December 2020 with the retrofit of an existing diesel-electric linehaul locomotive. The diesel prime mover and traction alternator have been replaced with hydrogen fuel cell and battery technology to power the unit’s electric traction motors. In November 2021, CP received a $15 million 50% matching grant from Emissions Reduction Alberta (ERA) to expand the initiative to three locomotives (now two linehaul units and one switcher), install hydrogen production facilities at two locations, and create a “global center of excellence in hydrogen and freight rail systems” in Alberta. On Jan. 24, 2022, CP shared a video on Twitter of the fully painted locomotive, which the railroad said had run under its own power.

The next step, Creel told attendees, is to “partner with a customer—we have discussions ongoing now—that has the scale and the ability with a closed loop to partner with us to build enough main line locomotives, so we can prove the technology out in the harshest of operating conditions, through the mountains of the Rockies west of Calgary. It’s a perfect test bed. If you can operate there: Heavy haul, cold temperatures, the most challenging operational conditions I’ve ever experienced in my career. And if it works there, it will work everywhere.”

Creel noted that the locomotive would likely run in “local service first because you still have to develop the fueling support system across the nations.”

In related developments, Calgary-based ATCO Group, through its investment in Canadian Utilities Ltd., reported in May that it was providing engineering, procurement and construction services for two hydrogen production and refueling facilities in Alberta as part of CP’s Hydrogen Locomotive Program. Additionally, Ballard Power Systems in January said it would deliver eight additional 200-kilowatt fuel cell modules to CP this year; CP ordered an initial six 200-kilowatt fuel cell modules from Ballard in March 2021.