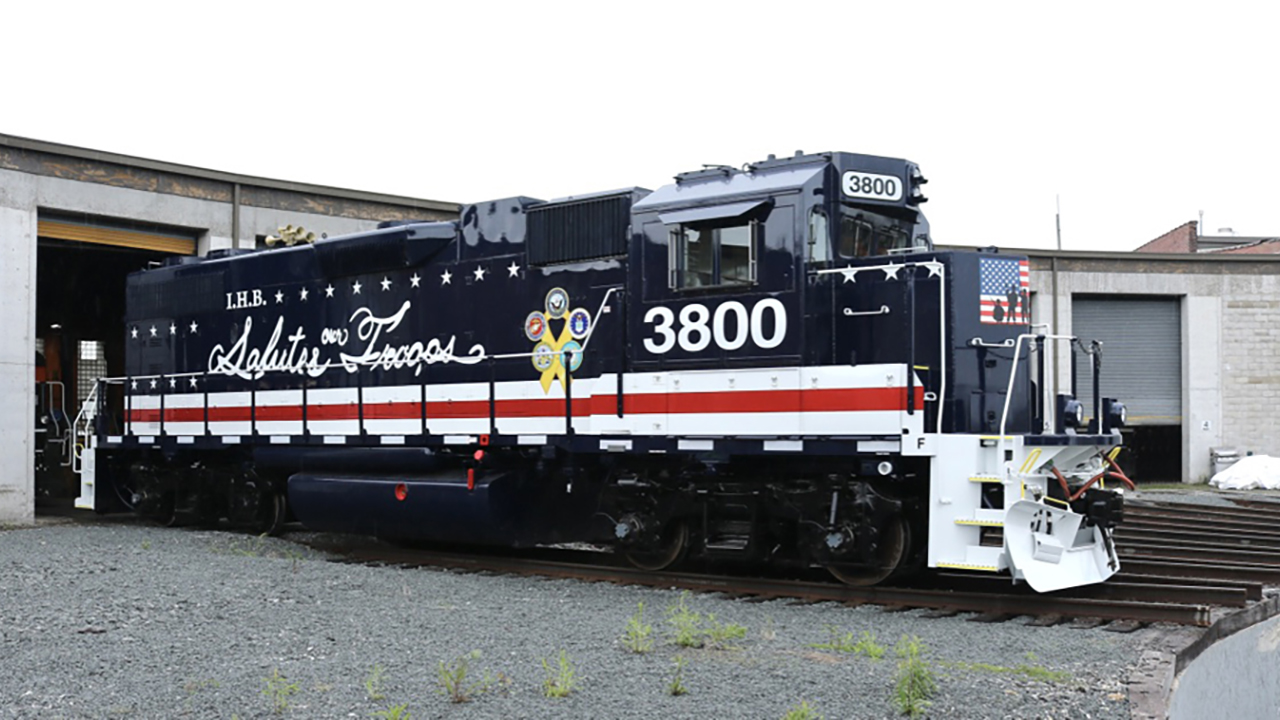 Editor’s Note: This is the story of Indiana Harbor Belt EMD GP38-3 3800, as told to Railway Age by IHB Mechanical Superintendent Michael Cunningham. The unit, purchased with a damaged prime-mover, underwent a complete rebuild and upgrade, and received a very special military tribute livery.

“This EMD GP38-3, before it came to the Indiana Harbor Belt, was Norfolk Southern 5274. This locomotive was a full rebuild done by NS in 2018, complete with a new cab. The prime-mover was upgraded to meet EPA Tier 0+ emissions standards. However, NS experienced an engine failure and sold the unit at auction to Metro East Industries (MEI). We purchased it to replace IHB 4015, a GP40 that had wreck damage. MEI provided an engine to replace the one that had failed on the NS. The replacement was overhauled in 2018 as well and meets Tier 0+ emissions standards. MEI requalified all the engine components and installed it in the locomotive.

“This GP38 has a Roots-blown 16-cylinder prime-mover that provides 2,000 hp. It is a four-axle unit with D78 traction motors providing around 60,000 pounds of tractive effort. It’s primarily used in road service on the IHB, with occasional switching duties.

“We decided to go with a Medha Transportation LLC control system on this locomotive. Medha, whose U.S. operations are based in Irving, Tex., offers its Advanced System for Locomotive Excitation & Propulsion Control and Fault Diagnostics, or MEP system. I contacted a few other railroads, among them Watco, that are using the Medha system. All were impressed with its abilities, as well as Medha’s customer service and technical support.

“As for the paint scheme,  I am a United States Marine Corps veteran who appreciates everything that experience has led me toward. I am also appreciative of those service members that have come before me and those who will serve after. The Marine Corps provided me with electrical and mechanical training that gave me the tools I needed when I joined the railroad industry as a field service engineer for RJ Corman Railpower in 2008. The military also gave me the discipline, work ethic and forward thinking that helped me advance my career.

“I came up with the idea to do a military appreciation-themed locomotive that stated “IHB Salutes the Troops.” IHB locomotive mechanic Roger Evetts, who is a fantastic artist, devised the paint scheme. He painted a concept, which the final product very closely matched. I decided to ask all the veterans that currently work on the IHB if they would like their names added to the locomotive. We ended up with 50-plus names of veterans displayed rear of the carbody.

“IHB’s rebuild program started in 2018 with two GP40s, which by the time I arrived in January 2018 had been sitting for quite some time with freeze damage. Those units, IHB 4011 and 4013, were sent to MEI for overhaul and equipped with PTC.

“At the same time, we were receiving new RJ Corman Railpower dual-fuel CNG/diesel locomotives. The first two, IHB 1506 and 1508, arrived in in 2017, while I was a field service engineer for Railpower. We then received two more CNG locomotives in 2018, IHB 1504 and 1514.

“Currently, we have three NRE gensets undergoing conversion to slugs. They will be paired with the GP40s bought in 2020 as mother/daughter sets to work the hump yard. We also have one SW1500 and another SW1500 mother-daughter set undergoing rebuilding.

“Going forward, we plan to rebuild one to two SW1500s and two to three GP38s or GP40s per year until the remainder of our fleet is rebuilt. This program should be completed in 2025 or 2026.