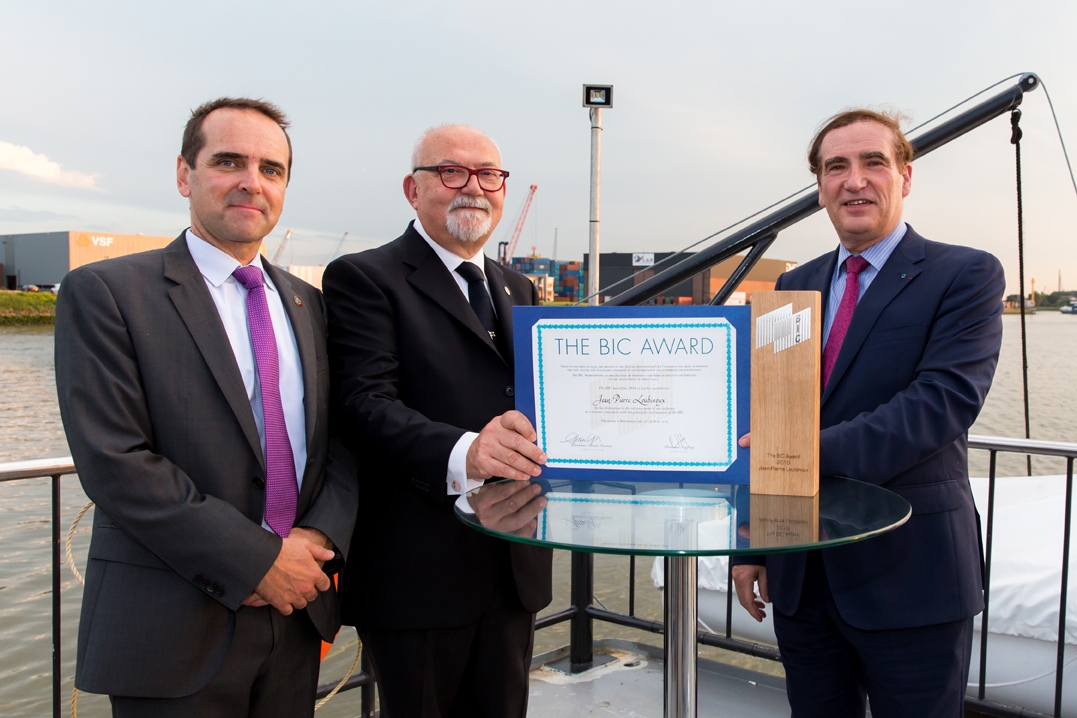 The BIC award was presented to Loubinoux at a gala dinner hosted at UIC’s Global Rail Freight Conference in Rotterdam, the Netherlands, in recognition of almost 40 years of exemplary leadership in the international railway sector.

The BIC’s Board of Directors cited Loubinoux’s development of sustainable transport and low emission trade alternatives as a deciding factor, as well as his work on increasing railway standardization, security and safety. After almost three decades with SNCF, Loubinoux currently holds the position of General Director, UIC (International Union of Railways), the worldwide railway organization.

BIC says Loubinoux’s work has greatly influenced the way that the world’s railways have developed. The past year has seen Loubinoux involved in the passing of two landmark international agreements for sustainable development and climate change; 2030 Agenda for Sustainable Development (Sustainable Development Goals) and COP21 Climate Change accord. This involved working closely with the UN Secretary-General as a Member of the UN High Level Advisory Group on sustainable transport for the Five Year Action Agenda.

“Mr. Loubinoux has dedicated his working life to the sustainability of rail and intermodal trade. His commitment to promoting sustainability in transport, and increasing rail safety and security is a notable achievement and one that fully deserves the BIC Award,” says BIC Board Chairman Giordano Bruno Guerrini.

BIC is an organization that promotes the safe, secure and sustainable expansion of containerization and intermodal transportation. The annual award honors individuals or organizations that have made the most notable contributions towards these goals.

Since 1922, the UIC has been involved in the preparation of voluntary railway standards for rail operators, and under the leadership of Jean-Pierre Loubinoux, the production of standards has become a strategic issue for UIC. Known today as “UIC International Railway Standards” (IRS), they support the design, construction, operation and maintenance of, and interworking between, railway systems, sub-systems and networks standards, and place emphasis on safety and security issues in railway trade. An agreement was recently signed with the IEC and effective synergies are currently developed thanks to Jean-Pierre Loubinoux’s cooperation with ISO.

Since the appointment of Jean-Pierre Loubinoux as General Director in 2009, rail security has also become a strategic issue for UIC and its international cooperation bodies. UIC has been involved in a high number of projects or actions at European as well as at global level and is more committed than ever to promote and develop a safe and interoperable rail transport system, Loubinoux graduated from the Ecole Centrale Paris, going on to work at the French Foreign Trade Delegation to Hong Kong in 1977, before joining French railway SNCF in 1978. Loubinoux held numerous positions in SNCF including Chairman and CEO of SNCF International, Chief Executive of SNCF Freight International, and SNCF Director of International Development.

In his 40 years of service, Jean-Pierre Loubinoux has been awarded several honors including the Silver Medal of the French Ministry of Equipment, Transport and Tourism, as well as two of the highest decorations in France; the Legion of Honor, and an insignia as Commander of the French National Order of Merit. In addition, he is involved in many institutions and associations and holds titles such as French Foreign Trade Advisor and Chairman of the Transport Committee, Chairman of the Medef International France-Argentina Committee, Vice-Chairman of the Ecole Centrale Association and Chairman of AFFI (the French association of railway engineers and managers). He is a Member of the Chartered Institute of Transport and Member of the Board of the US High Speed Rail Association.