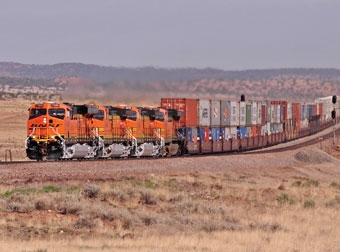 Coal is no longer king and will not return to the position it once held as the industry’s largest revenue stream. Crude oil might bounce back, a little. Motor vehicles are cyclical. Grain is profitable but seasonal.

Truth be told, the industry has done a stellar job lowering operating ratios, but it has largely accomplished this this by cutting costs and improving efficiency and productivity. Wall Street loves this kind of activity, because too many Wall Street types can’t see beyond the next fiscal quarter or two. That’s the nature of their business. But trimming only goes so far. One can’t keep hacking away at limbs until only the trunk remains. Yes, a tree has to be pruned, sometimes to get rid of the dead wood. But if the tree is to survive and thrive, it must grow.

Where will top-line growth reside, once the economy rebounds and traffic starts flowing back onto the rails? Some experts say intermodal, and not necessarily long-haul. Are the experts right? Is the industry doing enough to capture truck traffic and provide the excellent service demanded by intermodal users? Can our success with long-haul service be translated into short-haul success? Is short-haul business worth chasing, and are the railroads flexible and open-minded enough to do what it takes to develop this business?

The story of then-Santa Fe Railway executive Mike Haverty’s handshake deal with the late trucking magnate J. B. Hunt more than 30 years ago on a demonstration TOFC run out of Chicago is legendary. Today, much of Hunt’s long-haul container and trailer traffic is railed.

Less known are the stories of other, far-less-visionary railroad managers railing against intermodal. Recalls one now-retired intermodal executive who did a lot during his career to grow business and improve service:

“Intermodal sales began as a function of the intermodal departments because the carload guys hated our guts. When I ran intermodal operations for a Class I, a friend on the carload side over lunch told me that his boss, the Assistant Vice President of Sales, told all of his salespeople that he would fire any one of them who he caught selling intermodal.”

Thank goodness those days are long-gone, and the dinosaurs opposed to working with—gasp—truckers, of all people, are mostly extinct.

“Short-haul intermodal is one big untapped area for the railroads,” says this same former intermodal executive. “Most of what is needed currently exists. For short-haul markets, it cannot be in stacked containers. The terminals need to be lean and mean—no $100 million-plus stack terminals. No lift machines. If you are a “rich railroad,” pave the terminal, if you must. The equipment hauled needs to be trailers. The cars need to be side-loaded by the trailer owner’s delivery drivers on a ramp and positioned. Check-in and check-out needs to be very rapid—one of the few places to use rail labor in the terminal. The only other rail labor should be supervision and security.”

Steve Ditmeyer, one of the industry’s visionaries and a frequent contributor to Railway Age articles and conferences, offers this analysis: “In my humble opinion, short-haul intermodal (250 to 700 miles) represents the only opportunity in the near future for railroads to increase their traffic. And they only need to capture just a small fraction of the total short-haul truck traffic to experience a substantial traffic gain.

“Two things are needed to pull this off. The first is new roll-on, roll-off equipment on the order of the CSX/New York Air Brake Iron Highway trainsets and CP Expressway trainsets, or the CN/Wabtec Intermodal Ramp Cars. The designs for this equipment already exist, and the carbuilders now find themselves with plenty of excess production capacity.

“The second thing the railroads need is a train control system to enable them to run short-haul intermodal trains on precise schedules. Fortunately, their PTC systems will be coming on line in the next year or so. GPS plus digital communications will provide the continuous real-time information to enable them to execute tightly scheduled operations, should they elect to do so.

“When I was at MK Rail and assembling the Iron Highway trainsets for client CSX Intermodal in the mid-1990s, numerous trucking companies, a major parcel delivery service, and a major grocery chain literally pleaded with us to sell Iron Highway trainsets to them. That was without MK doing any marketing of the equipment; word had gotten out of our contract with CSXI. I had to refer these potential customers to CSX Intermodal, which had acquired the rights to Iron Highway from NYAB, and CSXI did not want others to have the technology. I was disappointed because I sensed a very strong interest from these trucking companies and shippers in using the equipment to cut the costs of their short-haul over-the-road trucking operations.”

The Iron Highway began as a development by NYAB as part of the Association of Amer5ican Railroads’ High-Productivity Integral Train (H-PIT) program in the 1980s, “and it ended when McNeil Porter, president of CSX Intermodal, lost his fight with Pete Carpenter to keep CSXI independent of CSX Transportation in late 1995,” Ditmeyer recalls.

“My thesis beyond coal: We’re in a 2%-growth economy where there is less stuff moving than in a 3-4% economy. Finished goods from cornpone to white goods are less in demand, so you need less raw material to meet what demand there is. Lower demand for finished goods equals fewer goods moving to market, and what goods are moving are moving by truckloads, not carloads, in amounts more fitting for smaller inventory loads. So, yes, it’s a freight recession, and the bloom is off the Railroad Renaissance.

“The bloom is off because with the Staggers Act, all kinds of new doors were opened. But now it’s all business as usual. The Staggers “Wow Factor”—credit Jim Blaze with that—of contract pricing and pricing to what the traffic will bear without the ICC looking over your shoulder has morphed into order-taking and pricing by computer model to maximize revenue and minimize cost. The essential purpose of any business—creating customers—may have been lost. “We’re not solving for what it’ll take to make the railroad product preferential to the truckload. Maybe the railroads need to get out of the carload selling business altogether and turn that over to third parties, as many did with intermodal eons ago. Mike Haverty got it right: ‘Mr. Hunt, I have this train and I’d like you to fill it.’ That can work, even in a 2% economy.”

Adds Jim Blaze, a veteran railroader, economist and industry consultant: “Increased domestic truck competition with more short-term truck lead rate quotes plus a slower growth economy means that the pattern we saw in 2012-2014 of rail intermodal growth at two to three times the rate of GDP growth is gone. Is that a response to rail pricing plus rail service plus truck short-term pricing plus short-term truck and driver supply capacity?”

The first run of BNSF train Q-PTLALT, which introduced direct intermodal service between the Pacific Northwest and Texas, got off to such a good start that it was nearly eight hours ahead of schedule by the time it exited Washington State shortly before 10:00 p.m. on Sept. 13. It originated earlier the same day in Portland, Ore., picked up additional cars in South Seattle, Wash., then made a straight dash east through Billings, Mont., then south through Denver to ultimately reach BNSF’s Alliance Terminal outside Fort Worth, Tex.

Together with counterpart Q-ALTPTL (which departed Alliance the same day), this new intermodal lane will see trains departing five days per week in both directions. BNSF says shippers in the Portland/Seattle region can now cut two days from the transit time to Texas compared to other existing rail options, and feels this new service will be “comparable in speed to single-driver, over-the-road options.” Eastbound Q-PTLALT is scheduled to reach Alliance by the morning of the fifth transit day, while westbound Q-ALTPTL is supposed to reach Portland by the sixth transit day. According to BNSF’s automated online Intermodal Advisor, a refrigerated trailer or container traveling from Portland to Alliance is estimated to save a shipper 9%, or $322, using this new service.

BNSF predecessor Burlington Northern began running intermodal trains between the Pacific Northwest and Houston back in 1985, but that service ended in the mid-1990s. The recent decline in coal traffic out of the Powder River Basin of southeastern Montana and eastern Wyoming has freed up space that makes PNW-Texas intermodal feasible once again. As BNSF puts it, the railroad is “leveraging underutilized capacity in the central section of BNSF’s network.”

That sentiment is shared by Montana Rail Link President Tom Walsh, whose main line carries many of BNSF’s trains across southern Montana. Walsh says, “With the decrease in coal volume over the past couple of years, capacity has opened up on the MRL and BNSF coal route. This new intermodal service offering is a great example of MRL and BNSF’s ability to adjust and grow our business while putting back to work underutilized infrastructure.”

Between Missoula and Paradise, Mont., MRL will make discretionary use of two separate routes to handle BNSF’s new trains on a day-by-day basis: the 10th Subdivision via Ravalli (unsignaled, 2.2% grades, light traffic) or the 4th Subdivision via St. Regis (signaled, minimal grades, heavier traffic). Jim Lewis, Chief Sales/Marketing and Information Officer for MRL, says, “Having the option to run the 4th or 10th Subdivision allows us flexibility with the new traffic to utilize the route that produces the best velocity for BNSF and its valued customers.” Lewis further points out, “There are no plans to pick up or set out local intermodal traffic at this time, although this could be an option in the future.”

A key commodity group being targeted by BNSF’s Portland-Alliance service is perishables. BNSF says, “Faster, more direct routing means agricultural producers can move apples and other produce to Southern markets at the peak of freshness.” Some of the Northwest’s largest growing areas, including central Washington’s apple country, are located near intermodal facilities in Wenatchee and Quincy, which BNSF served in the past. Amy Casas, Director-Corporate Communications for BNSF, says, “Currently we are offering the movement of containers and trailers from Portland, so customers with perishables that move in trailers will need to get them to Portland for transport. Perishables that move in temperature-controlled containers will also have Seattle as a transportation option. We are currently only offering the movement of containers out of Seattle.”

This story first appeared in the October 2016 issue of Railway Age.