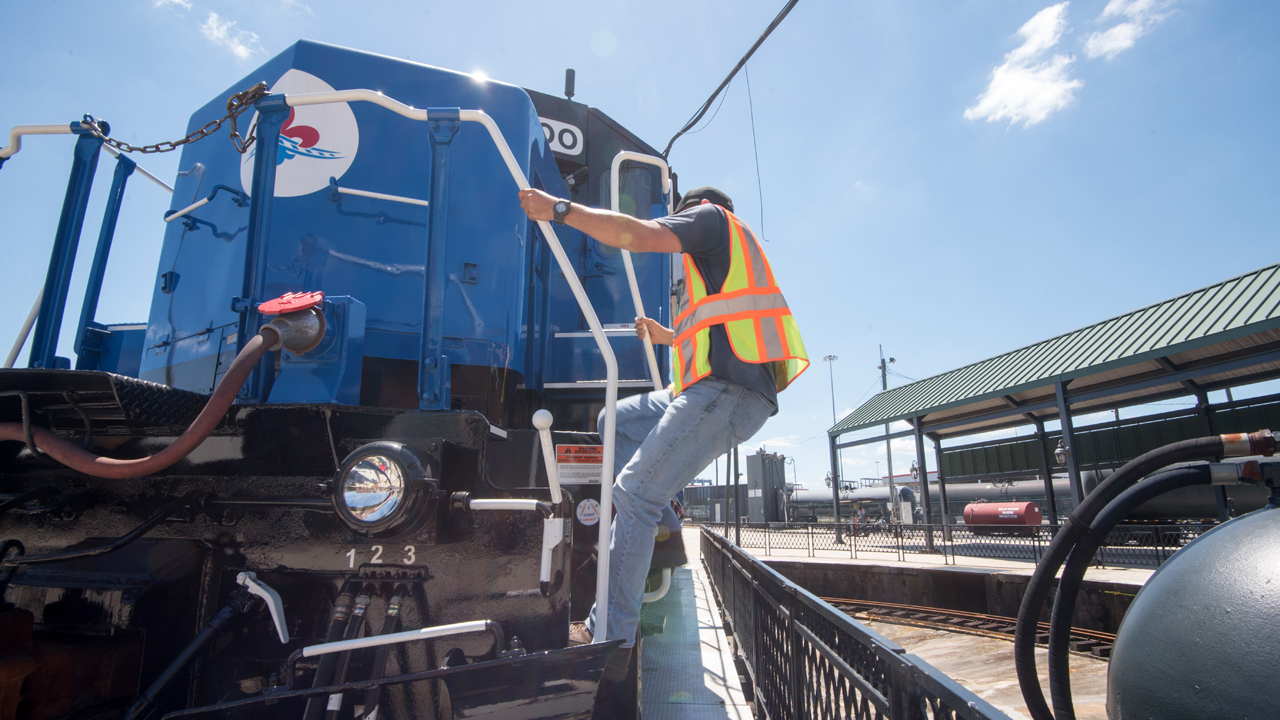 An NOPB employee properly dismounting and turning a new lower emission locomotive on a turntable built in the 1920s. NOPB photo.

With zero reportable injuries and zero human-factor-caused derailments in 2020, Class III New Orleans Public Belt Railroad (NOPB) set a new safety record, “ the first time reaching this milestone for NOPB and a significant accomplishment in the railroad industry, which holds itself to stringent safety standards,” the railroad said. The record is based on NOPB data from the past 14 years.

“This remarkable safety milestone is a direct result of the focused diligence and awareness of the entire New Orleans Public Belt Railroad team to keep our gateway strong and safe,” said Port of New Orleans President and CEO and NOPB CEO Brandy D. Christian. Added NOPB General Manager Mike Stolzman, “Good safety is good business, and the men and women of the New Orleans Public Belt embrace their own safety and the safety of the community every day. These achievements were not met without the dedication and diligence of the 165-person NOPB team, who each play a role in ensuring that we remain safe and to protect the community where we live and operate.”

Achieving this safety milestone required “the efforts of mechanical, transportation and engineering teams pulling in the same direction,” NOPB said. “Input from employees in the field doing the work is how the team knew what to do to implement changes and improve. Repairs and updates to the yard tracks and crew facilities, based on this feedback, were also prioritized. NOPB’s safety department also implemented a learning management system that allows for training to take place anywhere, on any computer system.”

“These measures fostered more collaboration and allowed staff to remain focused on the positive work they were doing in the railyards,” said NOPB Vice President Transportation and Mechanical Jamie Oldham. “We like to stress an environment that is built on teamwork among all our work groups. We are all one NOPB.”

NOPB said its commitment to safety “goes hand in hand with its ongoing commitment to being a good neighbor. In May 2020, NOPB replaced 15 older locomotives with eight new lower-emission locomotives. With these new locomotives came a 25% reduction in fuel consumption, and emission reductions of 40% for NOx (nitrogen oxides) and 50% for PM (particulate matter).

According to the Association of American Railroads, since 2000, national train accident and hazmat accident rates are down 34% and 66%, respectively while rail employee fatalities in 2019 reached an all-time low with numbers in the single digits for the first time in history. “Even as railroads are proud of these safety improvements, they strive toward the ultimate goal of zero incidents,” NOPB noted.