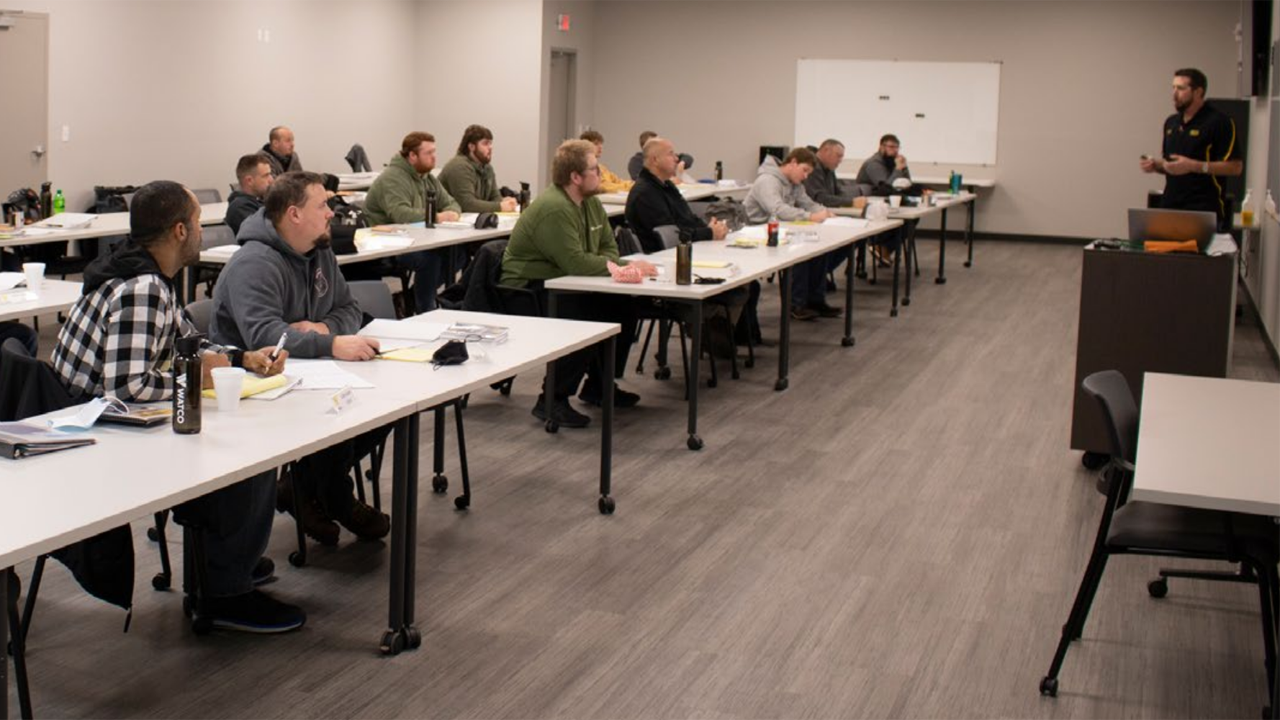 To accommodate growth, Watco has more than doubled the size of its Safe Performance Center, boosting the number of employees who can receive on-site training there each day from 40 to 150.

To accommodate growth, Watco has more than doubled the size of its Safe Performance Center, boosting the number of employees who can receive training there each day from 40 to 150. It is now housed in an 11,000-square-foot building that includes classrooms, a conference room, and a large space designated for a locomotive simulation lab, according to the transportation service and logistics company, which operates 44 railroads on more than 5,500 miles of track across North America and Australia, plus more than 80 ports and terminals across the U.S. and Mexico.

Additionally, a confined-space simulator—a tank car modified for training—was included on a section of track outside the new building. It will allow hands-on confined-space rescue training for Watco employees and first responders.

Watco employs nine instructors at the new facility, which replaces the 2017-built original.

“This expansion is more than just a building; it is an investment in the future of Watco and the Fairfield community,” Watco CEO Dan Smith said. “It represents Watco’s commitment to our customers, to our own people, to the communities we serve, and, most importantly, to our never-ending mission to be the safest company in our industry.”

Through the Florida Job Growth Grant Fund, Okaloosa County will receive $3.2 million to expand roads, rail lines and utility infrastructure at the Shoal River Ranch Gigasite. With this investment, the site is expected to bring more than 11,000 jobs to region, including more than 4,000 in manufacturing, according to the Governor’s office.

Located seven miles east of Crestview, the site has access to Interstate 10; Highway 90; and the Florida Gulf & Atlantic Railroad, a RailUSA subsidiary that interchanges with CSX and Genesee & Wyoming’s AN Railway and Bay Line Railroad. “The site is projected to make an economic impact of over $47.6 million after infrastructure improvements are made,” the Governor’s office reported on May 18.

“The Shoal River Ranch Gigasite is a critical infrastructure project and the award made today [May 18] is a difference maker,” said Mel Ponder, Chairman of the Okaloosa County Board of County Commissioners. “There is nothing else this size, with this much access to a major interstate, in the state of Florida. Future tenants will have access to people trained and led by our education system, our college system, and our transitioning military who are technically trained.”

Proposals for the Florida Job Growth Grant Fund are reviewed by the Florida Department of Economic Opportunity (DEO) and Enterprise Florida, Inc., and selected by Gov. DeSantis “to meet the demands for workforce training or infrastructure needs in communities around the state.”