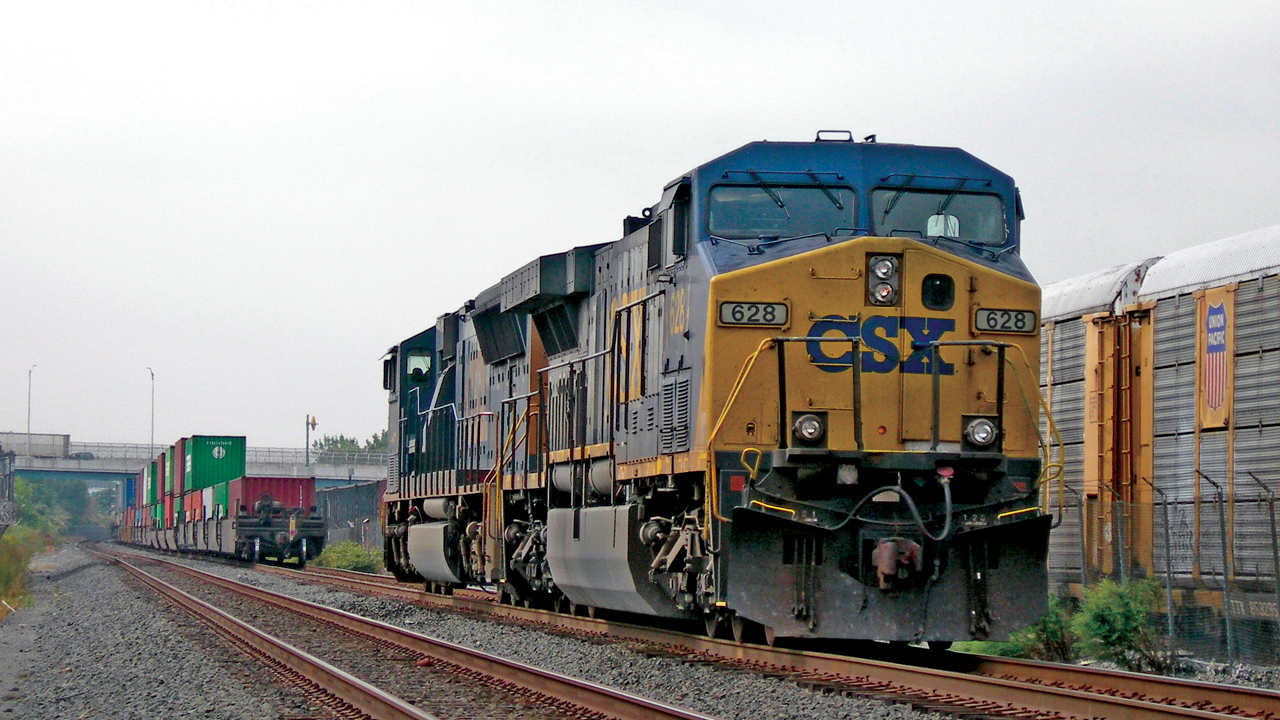 The NEARS April 2019 Spring Conference in Baltimore saw the second-largest attendance ever since the organization began holding the conference. That, observed NEARS President Jason Seidl, Cowen and Co. Managing Director and Railway Age Wall Street Contributing Editor, had largely to do with CSX and Norfolk Southern—with CN and Canadian Pacific, the Class I’s serving the U.S. Northeast—adopting Precision Scheduled Railroading.

“Shippers spoke volumes about PSR,” Seidl noted. “Despite an initial bias against PSR driven by CSX’s early service failures, they seem to be cautiously optimistic that PSR implementation on the part of NS, Union Pacific and Kansas City Southern will have a more balanced approach.”

Six months after the NEARS Spring event, it’s still unclear how PSR—a buzz-acronym much of the Wall Street sell-side community has embraced with predictable gusto, because it appears to be based on generating short-term “shareholder value” (an equally popular buzz-term) and not on long-term, sustainable top-line business growth—is impacting shippers. Most likely, more will be revealed at the upcoming NEARS Fall Conference in Burlington, Vt., next month.

“The jury is still out on whether PSR is delivering its promised benefits,” said FTR Associates Vice President Rail and Intermodal Todd Tranausky. “At mature PSR railroads such as CN and CP, service has stabilized and even improved in some lanes. Weather impacts have muddied results at non- or newly implemented carriers, making it hard to draw a firm conclusion on the impact of PSR. Shippers are not entirely happy with the changes that have occurred, even though PSR has not been the only influence on railroad behavior and modal dynamics.” 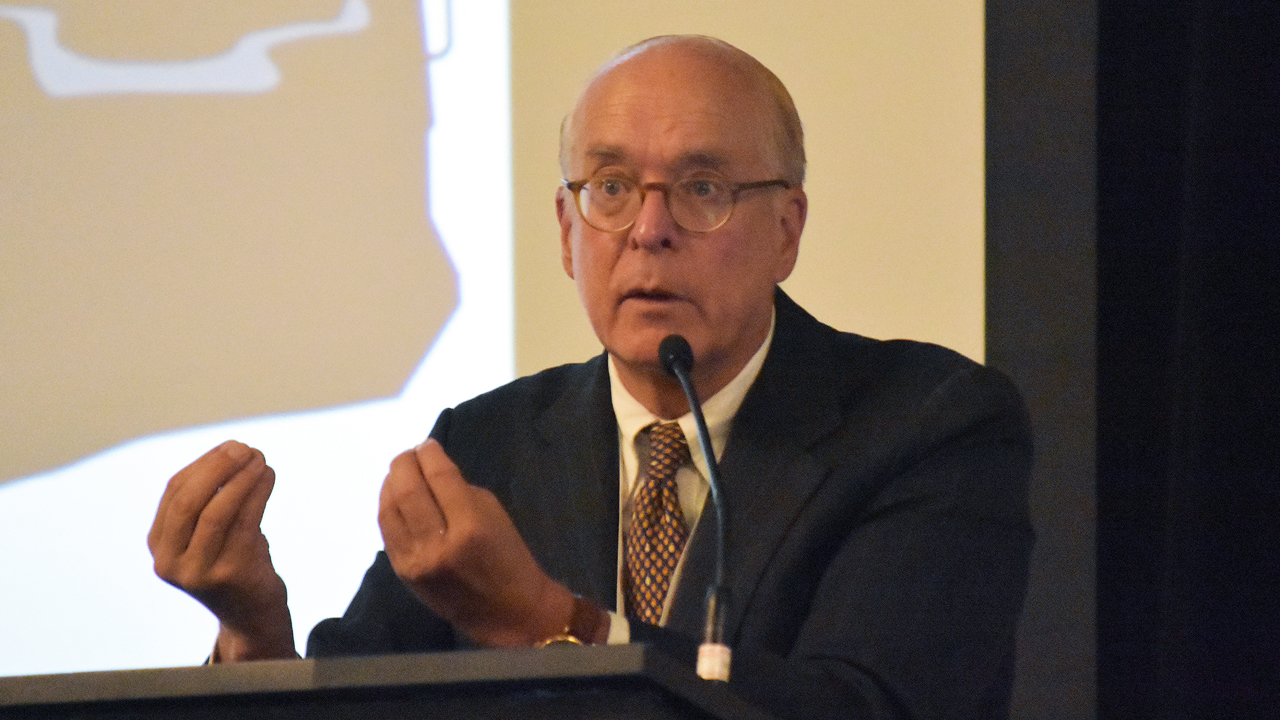 “It’s a damn important time for the railroads,” noted MidRail LLC Chairman Gil Lamphere (above), who many years earlier in his long career as a railroad entrepreneur and investor dealt with the late Hunter Harrison. Lamphere’s message to the NEARS attendees was critical of what has been occurring in the rail industry since PSR—largely driven by the influence of hedge funds and their short-term-ROI focus—emerged to become, for better or worse, the industry’s modus operandi.

“The future of railroads is not about taking a slice out of the pie, but growing the pie,” Lamphere said. “Hunter implemented PSR on CSX way too fast. He broke a lot of eggs. It’s better to make changes much more carefully over a longer time, without cracking the eggs.”

As to where short lines fit into the new railroad order, “It’s a challenge for the Class I’s today as to how they integrate short lines into PSR,” Lamphere noted. “PSR can be very disruptive to short lines. Many do not believe the Class I’s are paying attention. Trying to reach the right person at headquarters is a shot in the dark.”

Lamphere talked about the “cult of operating ratio, which began on Wall Street. OR is the inverse of operating profits, which should be based on price times volume, not on reducing expenses. This isn’t about expenses. It’s about sustainable growth. The Class I railroads have become oligopolies. Money paid out to shareholders is money that’s not being re-invested into the network.”

One exception, Lamphere said, is CN, “the newest iteration of PSR. CN is investing capital and adding capacity. JJ Ruest (Railway Age’s 2019 Railroader of the Year) is doing this strategically, intelligently. If the U.S. Class I’s don’t do PSR intelligently and together, the government is going to get involved. The Class I’s have to respect the short lines and their interchange points. The Surface Transportation Board is watching this very carefully. STB is sensitive to shipper needs (see p. 10).”

“Railroads,” Lamphere concluded, “are the future of transportation. Success and growth involves the right people working safely, with the right amount of assets. Railroads begin and end with railroad workers. We need to value the workers and front line supervisors, because they are the first measure of reliability for our customers. The future lies somewhere in between OR and growth. PSR needs to serve the customers—not the other way around.”

One of the most comprehensive presentations at the NEARS conference came from Ken Sherman, Vice President and General Manager of global supply chain logistics provider Intellitrans.

“Planning,” Sherman said, “is really order management. The top priority for shippers is to fill customer orders on time. This results in shipper anxiety when trying to plan for potential change in carrier service. ERP (enterprise resource planning) systems build average transit times into the planning process, so changes in transit time can negatively affect order fulfilment capability. Changes to ERP planning cycles leave shippers second-guessing their ability to meet their customers’ demands. Some of our customers have added up to six extra days into their transit plans for PSR implementation.”

Inventory management? “Existing inventory management plans are built on transit ‘norms,’” Sherman said. “Inconsistency, or changes in these norms, result in inventory replenishment issues. Too much inventory, and working capital increases. Too little inventory tends to expedite cost controls, which can lead to plant shutdowns and lost customers. Perceptions of pending service disruptions can result in wild swings in orders and cause further problems.”

As to PSR’s so-called “smart execution,” Sherman said shipper concerns have to do with origin-switch schedule changes, BOL (bill of lading) charges for missed switches, destination switch schedule changes and the inability to retrieve cars from storage quickly. The effects on shipment tracking are “increased use of non-primary routes, resulting in increased transit time, which is really a method to avoid yard congestion problems on initial rollout of PSR; junction dwell time increases; sporadic occurrences of in-transit terminal dwell increase; out-of-route false positives created by non-primary routes; and alerts on exception ‘norms’ that may no longer identify exceptions properly.”

PSR’s reductions in manifest service “has created the perception that the railroads no longer want this business,” Sherman said. “But for some shippers, in some cases, the perceived ‘hassle’ is not worth the effort to switch to truck until rail service smooths out. Under PSR, railroads have virtually no reserve capacity for special situations. This includes a lack of special train/switch availability for hot-car situations. There is also a perception of lack of sufficient CSRs (customer service representatives) to answer increased volume of inquiries. And, if a railcar is blocked on the wrong train, it travels further, limiting or eliminating the railroad’s ability to get it turned around.”

Shipper financial concerns resulting from PSR have to do with cost impacts, Sherman noted. These are “an increase in railcar fleet size and lease costs; last-minute truck coverage; a decrease in truck capacity resulting from a decrease in rail service; high levels of forward-deployed inventory; increases in accessorial charges to drive carrier efficiency, such as BOL fees for cars billed but not ready for switch, demurrage and detention; and increases in labor costs to manage through problems. For example, for some of our customers, the supply chain budget did not forecast PSR service impacts. All this means that the cost to serve customers increases, and profitability decreases.”

Sherman concluded his remarks by citing an example of one Class I that encountered numerous shipment exceptions per day across all its customers. “The historical data did not capture shipments moving, schedule changes, demarketing and other non-in-transit impacts. There is much caution surrounding some PSR implementations.”